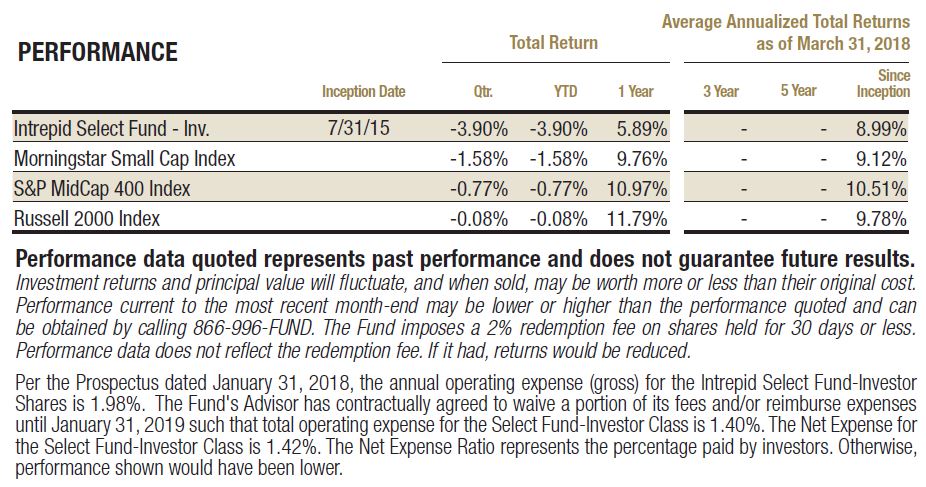 Our first quarter performance was poor.  The Intrepid Select Fund (the “Fund”) declined 3.90% in the three months ending March 31, 2018.  The Russell 2000, Morningstar Small Cap Total Return, and S&P MidCap 400 indexes returned -0.08%, -1.58%, and -0.77%, respectively, for the same time period.  Our first quarter decline was disappointing and is primarily attributable to disappointing results for two holdings, Retail Food Group (ticker: RFG AU) and Corus Entertainment (ticker: CJR/B CN), which were partly offset by great news for a third holding, Primero Mining (CUSIP 74164WAB2).  The Fund had 13.8% of its assets in cash as of March 31, 2018, which was near the lows for our cash over the quarter.  Cash was above our 10% target as we reduced certain positions and did not have suitable opportunities to reinvest the capital.

We discussed Corus in our last letter to you.  In January, the company released results for its fiscal first quarter.  Corus’ television advertising revenues are falling along with its Canadian peers.  Since the company acquires most of its content from U.S. media companies, we think Corus will have a tougher time navigating a future transition to a direct relationship with consumers.  We sold our position immediately after the report.  I underestimated the speed with which digital venues would seize advertising share from Canadian TV networks and overestimated Corus’ bargaining power after its acquisition of Shaw Media.

When viewed individually, Retail Food Group (RFG) accounted for almost all the Fund’s loss this year.  We purchased the Australian restaurant operator in December amidst a hailstorm of controversy surrounding the firm’s relationships with its franchisees.  In our Q417 letter, we remarked that “the stock has recovered some lost ground already.”  That victory dance was premature.  RFG’s shares were walloped when the company reported semi-annual results in early March.

We have rarely witnessed such one-sided media coverage of a company.  RFG has legitimate issues, but its management has done a remarkably bad job in addressing false accusations.  For example, one of the top news programs in Australia, ABC News, recently claimed that RFG’s franchisees are being gouged, citing as evidence that fees from franchisees were up 27% in 2017, while the sales revenue from those franchisees’ outlets was down 8.4%.[1]  They implied that RFG is collecting more fees from franchisees even though the franchisees’ own sales were slipping sharply. 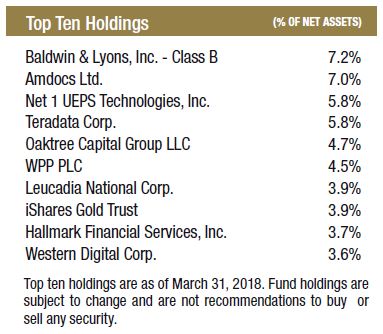 The 27% growth referenced in the article is the change in RFG’s overall revenue, not “fees from franchisees” as described by ABC News.  RFG’s sales rose 27% in 2017 because the company acquired Hudson Pacific Corporation and formed a new Commercial Food Services division.  The vast majority of Hudson’s customers are independent restaurants, cafes, and other foodservice companies that are outside of the RFG franchise network.

ABC also noted that sales revenue from franchisees were down 8.4%.  This is incorrect and misleading.  The 8.4% decrease reflects the overall revenue that RFG received from its Bakery Cafe, QSR Systems, and Coffee Retail Systems segments.  This includes corporate stores owned by RFG.  Moreover, the decline in these revenues is directly affecting the parent.  As franchisees close stores, RFG receives less revenue from royalties.  The franchisees’ domestic same store sales averaged +0.9% in fiscal 2017.  While this comp isn’t great, it’s a long way from the harrowing declines implied by the slanted media coverage.

The barrage of incendiary press coverage has created a self-fulfilling prophecy where the company is struggling to enlist new franchisees.  In hindsight, as we were contemplating our entry into the stock, we could have better factored in the potential for adverse publicity to weigh on the business model.  We are currently performing additional diligence on this name and will have more to report in our next letter.

In addition to Corus Entertainment and Retail Food Group, the Fund’s third largest detractor in the first quarter was Net 1 UEPS Technologies (ticker: UEPS), a South African payment solutions, transaction processing and financial technology company that we also acquired in December.  The stock has been burdened for several years by the anticipated loss of Net1’s large legacy welfare distribution contract with the South African government.  However, the Constitutional Court of South Africa confirmed the government was unable to take over the distribution of cash payments to welfare recipients by a March 31, 2018, deadline, and it ordered UEPS to continue facilitating these payments for at least six more months.  The pricing for these efforts has not been settled.

Meanwhile, another South African court ordered UEPS to return $27 million in payments it received in 2014.  These payments related to a government request for UEPS to re-register 11 million additional social grant beneficiaries beyond the planned 9.2 million recipients.  According to the company, these additional registrations led to the discovery of a significant number of ghost beneficiaries and duplicate grants and saved the South African government more than 2 billion rand per year for the last five years ($850 million USD at current exchange rates).  UEPS is appealing the verdict.

The South African government is a circus, and UEPS is one of its favorite whipping boys, even though the company has performed its role far better and cheaper than the government ever did.  Sadly, the merits of the situation won’t necessarily drive the outcome.  Fortunately, it is our view that UEPS’ current stock price is fully supported by the firm’s balance sheet and assets outside of South Africa.  Any positive developments for operations inside of that country could drive substantial upside to our estimated intrinsic value.  In February, the firm’s Chairman purchased a significant number of UEPS shares on the open market.

The Fund’s major success of the quarter was the proposed takeover of Primero Mining by First Majestic Silver (ticker: AG) on January 12, 2018.  This announcement sent the price of our convertible notes from the low 60’s to near par value.  As we predicted in our Q317 letter, Wheaton Precious Metals (ticker: WPM) agreed to reduce the streaming burden on Primero’s San Dimas mine in return for establishing a relationship with a stronger partner, First Majestic.  The deal has been approved by Primero’s shareholders and is expected to close later this month after it is cleared by Mexico’s anti-trust agency. 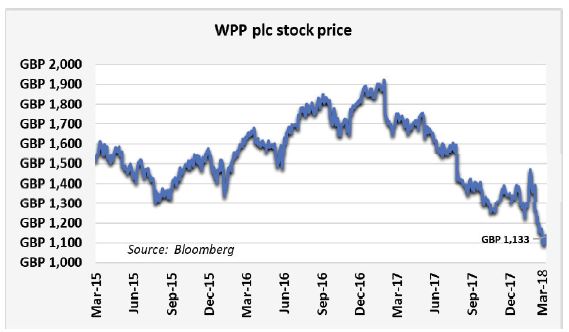 The Fund purchased one new position during the first quarter: WPP plc (ticker: WPP LN).  WPP is the world’s largest advertising agency.  The firm is comprised of over 160 different subsidiaries including storied names like Young & Rubicam and Ogilvy & Mather that perform a variety of services ranging from creative advertising, media buying (negotiating price and placement of advertisements), market research panels, and public relations.

WPP’s stock fell 40% from last year’s high, as investors have grown concerned by the company’s slowing sales and fears of ad agency disintermediation from digital players like Google and Facebook.  In 2017, WPP was impacted by reductions in ad spending from major consumer packaged goods companies and account losses from AT&T and Volkswagen.  In our view, WPP and its agency peers will remain important members of the advertising industry value chain and should be able to grow modestly.  We acquired the shares at a high single-digit multiple to estimated free cash flow.

We are confident that the Fund’s inauspicious start to the year is not related to recent market tremors.  The names we own often march to the beat of their own drum.  In some cases, share price declines cannot be explained by the market or even by company-specific developments.  The Fund’s largest holding, Baldwin & Lyons (ticker: BWINB), sold off throughout the final weeks of the quarter on no news.  Baldwin ended Q1 trading at 80% of its tangible book value and 11x the average earnings it produced in the five years through 2016.

In contrast, the Russell 2000 is selling for 105x trailing unadjusted earnings.  Baldwin is near its 52-week low because of investors’ recency bias.  The company posted an underwriting loss in 2017 due to trends affecting all commercial auto insurers.  We believe adverse developments peaked last year and Baldwin will deliver improved results going forward.  If we are wrong, then we own a firm likely trading at a discount to its theoretical liquidation value.