Two-thousand eighteen started off with a bang.  The broader equity markets continued to march higher through most of January with even more momentum than experienced in 2017.  January was shaping up to be one of the best months for the equity markets in years before giving back some of the gains in the last few sessions of the month.  Even so, the monthly performance was stellar.

Cryptocurrency investors, on the other hand, were not enjoying themselves nearly as much.  In our fourth quarter commentary we jokingly remarked that the cryptocurrency euphoria was resembling the meteoric rise of the tech stocks at the end of 1999.  The crypto party seems to have suffered a fate similar to the tech bubble.  After crossing $18k in December, Bitcoin declined nearly 70% in the next two months.  Other less recognized cryptocurrencies, or “alt-coins” fell even more.  Perhaps the crypto market has become a forward indicator.  In early February, U.S. stock markets experienced the first meaningful declines in two years.  The S&P 500 was down more than 1% for the first time in 94 trading sessions.  In 2017, the S&P 500 closed up or down more than 1% on just seven occasions.  This occurred 23 times in the first quarter of 2018.  The Dow and the S&P 500 gave back all of January’s gains and more, ending the quarter in the red, while the Nasdaq managed to remain positive. 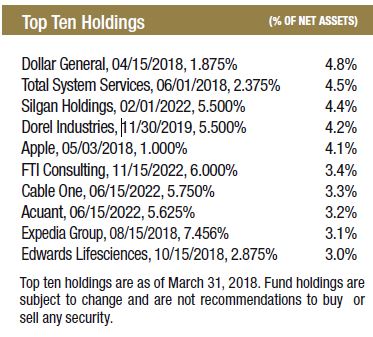 Fixed income generally had a tough quarter as well.  The Fed hiked its benchmark rate another 25 basis points in March to 1.75%.  The 10-year Treasury yield rose from 2.41% to nearly 3% before settling at 2.74% on March 31, 2018, negatively impacting longer-duration bonds.  Investment grade corporates suffered further blows as credit spreads rose from 90 basis points, the lowest level seen in a decade, to 117 basis points on March 31, as measured by the ICE BofAML US Corporate Index (the “Corporate Index”).  The post-credit crisis average spread is 154 basis points.

More germane to our focus on the high-yield market, Tesla’s bonds sank after a smattering of bad news.  We discussed the firm’s high-yield issuance in our Q317 letter, noting how investors gobbled up the $1.8 billion issue at the lowest yield ever for the rating and maturity.  Since then, the company reduced its output projections for the all-important Model 3.  If that weren’t enough, a fatal crash occurred near the end of March involving the famed Autopilot feature.  Moody’s downgraded the issue to Caa1 from B3 shortly thereafter.  Tesla is highly reliant on the capital markets to fund its massive cash burn, and the 200 basis point increase in the firm’s unsecured funding rate is going to sting when it needs to tap the markets.

Elsewhere in junk bond land, I was saddened when the news broke that Toys “R” Us would be liquidated.  I’m sure I am not alone when I say that I remember the place to be magical and would beg my parents to bring me.  I also share a last name with the founder, Charles Lazarus (no relation), who sadly passed away just days after the liquidation was announced.  Toys “R” Us…we will miss you.

Despite these headline stories, the high-yield market seemed relatively unfazed by the gyrations of the equity markets.  We have seen little change in the spreads of businesses we seek to lend to, although absolute yields have ticked up.  The ICE BofAML High Yield Index (the “HY Index”) declined 0.91% in the quarter ended March 31, 2018.  The shorter-duration ICE BofAML 1-5 year B-BB Cash Pay High Yield Index (the “1-5 year B-BB Index”) gained 0.14%.  Longer-duration investment grade securities felt the impact of higher government bond yields to a greater degree.  The Bloomberg Barclays US Aggregate Index (the “Barclays Aggregate Index”) lost 1.46% in the quarter.  Spread widening combined with higher Treasury yields resulted in a 2.20% loss for the Corporate Index.  The Intrepid Income Fund (the “Fund”) declined 0.31% in the quarter ended March 31, 2018.

Our performance in the first six months of the Fund’s fiscal year was also favorable relative to the indexes.  The Income Fund returned 0.69% in the six month period ended March 31, 2018, compared to a 0.51% loss for the HY Index and a 0.44% gain for the 1-5 year BB-B Index.  Investment grade bonds recorded negative results for the period, but to a lesser extent than the first quarter of 2018.  The Barclays Aggregate Index dropped 1.08%, and the Corporate Index lost 1.10%.

While we welcomed the return of volatility in the equity and debt markets, our performance in the first quarter of 2018 left us with mixed emotions.  We are quite happy with how our fixed income holdings performed in an environment where safe-haven government bond yields rose sharply.  All but a few of our corporate bond holdings produced positive returns and outperformed the indexes in the quarter.  Additionally, our Primero Mining convertible bonds jumped approximately 50% after the company announced fellow junior miner First Majestic (ticker: AG) would buy the company and retire the bonds at par.  The deal is still pending and is expected to close later this month.  Primero was the Income Fund’s largest contributor in the first quarter of 2018 and in the first half of the Fund’s fiscal year.  Regis’s 5.5% notes due 12/02/2019 were the Fund’s second largest contributor in both periods.

On the other side of the coin, our small allocation to equity securities more than offset the positive performance of our fixed income holdings.  At the end of 2017, the Income Fund held three equity securities – Baldwin & Lyons (ticker: BWINB), Corus Entertainment (ticker: CJR/B CN), and Retail Food Group (ticker: RFG AU), each accounting for roughly 1% of the Fund’s assets.

Corus hit us first with its earnings release in early January.  Despite management’s implicit reiteration of guidance at a conference in November, advertising revenues sank 4% in the quarter ended November 30, 2017.  Management has been consistently over-promising and under-delivering since the acquisition of Shaw Media.  We had been giving them the benefit of the doubt due to Corus’s strong position in women’s and children’s television networks.  We were operating under the assumption that consistently strong ratings would eventually lead to advertising revenue stabilization.  However, the earnings report was the last straw.  Our patience has worn thin.  While Corus still trades at what appears to be a ridiculously low multiple of forward operating income at 7x, even a multiple this low might not be justified if advertising revenue cannot be stabilized.  We decided to exit our position immediately after the earnings report.  The share price started drifting lower last fall, which made Corus a meaningful detractor in the first quarter of 2018 and in the first six months of the Fund’s fiscal year.

Our loss on Corus pales in comparison to the largest detractor of the quarter and first half of the fiscal year.  The Fund would have posted a positive return in the quarter if it weren’t for our ownership of Retail Food Group (“RFG”).  The position was discussed in our last letter under different circumstances.  We purchased the shares near the end of the fourth quarter after the stock was hammered as a result of several negative media reports on RFG’s treatment of its franchisees.  The allegations were overly sensationalist, in our opinion.  We got lucky and timed our purchases almost perfectly (or so we thought).  RFG’s shares rocketed higher in the final days of 2017 and contributed nicely to the Fund’s performance.

Unfortunately, we celebrated a bit too soon.  The stock was obliterated in March after releasing semi-annual results.  The media coverage has been heavily one-sided, and in some cases the allegations are verifiably false.  Management has yet to address the accusations in a meaningful way, which has started to impact the business model by making it more difficult to sell new franchises.  The Fund’s strategy with regard to equity holdings has been to significantly limit the position size, typically to a fraction of our target corporate bond weights.  This approach softened the blow.  The Fund’s weight in RFG is now quite small.  The team is completing additional due diligence on the company, and we plan to report our findings to you next quarter.

The Income Fund had four large corporate bond positions that were called or matured in the first quarter.  We also rebalanced several positions and exited our long-held stake in Corus Entertainment common stock, as discussed.  The proceeds were partially redeployed into short-term paper of investment-grade issuers that we believe offer attractive yields in excess of government securities.  Additionally, we participated in the refinancing of American Outdoor Brands’ 5.000% notes that were due to mature on July 15, 2018.  The new notes pay a 5% coupon and mature on August 28, 2020.  The terms of the new notes are virtually identical to the old.

The Fund initiated a position in the convertible bonds of Dorel Industries (ticker: DII/B CN) in late 2017.  Dorel is a manufacturer of consumer goods that owns several highly-recognizable brand names.  In its childrens product line, Dorel sells car seats, strollers, swings, and safety products under the Cosco, Safety 1st and Maxi-Cosi brand names, among others.  Dorel Sports is one of the world’s largest manufacturers of bicycles.  The firm owns the Schwinn, Mongoose, GT, and Cannondale brand names.  The third leg of the stool is the home products business, which makes ready-to-assemble furniture, baby cribs, futons, step stools and ladders.

Dorel’s kids and bicycle businesses have struggled over the last few years, but we believe signs of stabilization are emerging.  Despite the sub-par operating performance, the firm has maintained a relatively conservative capital structure.  Dorel’s cash flows can be lumpy due to timing of working capital needs, but the firm has a long history of generating positive cash flow even in recessionary conditions.  We expect free cash flow will be used to pay down debt.  In addition, we believe the founding family members’ significant economic stakes in Dorel, and possibility of their retirement in the next few years, provide further credit support.  Management is highly incentivized to avoid taking inordinate risks.  The convertible notes are yielding 5.5% and must be redeemed by May 31, 2019.  We believe the credit is attractive even ignoring the convertible option.

Portfolio activity was otherwise subdued, although the recent market volatility has provided us with some interesting ideas that we hope to report to you in future letters.  We are diligently searching for attractive opportunities to take credit risk while limiting the Fund’s duration, which as of March 31st was just over one year.