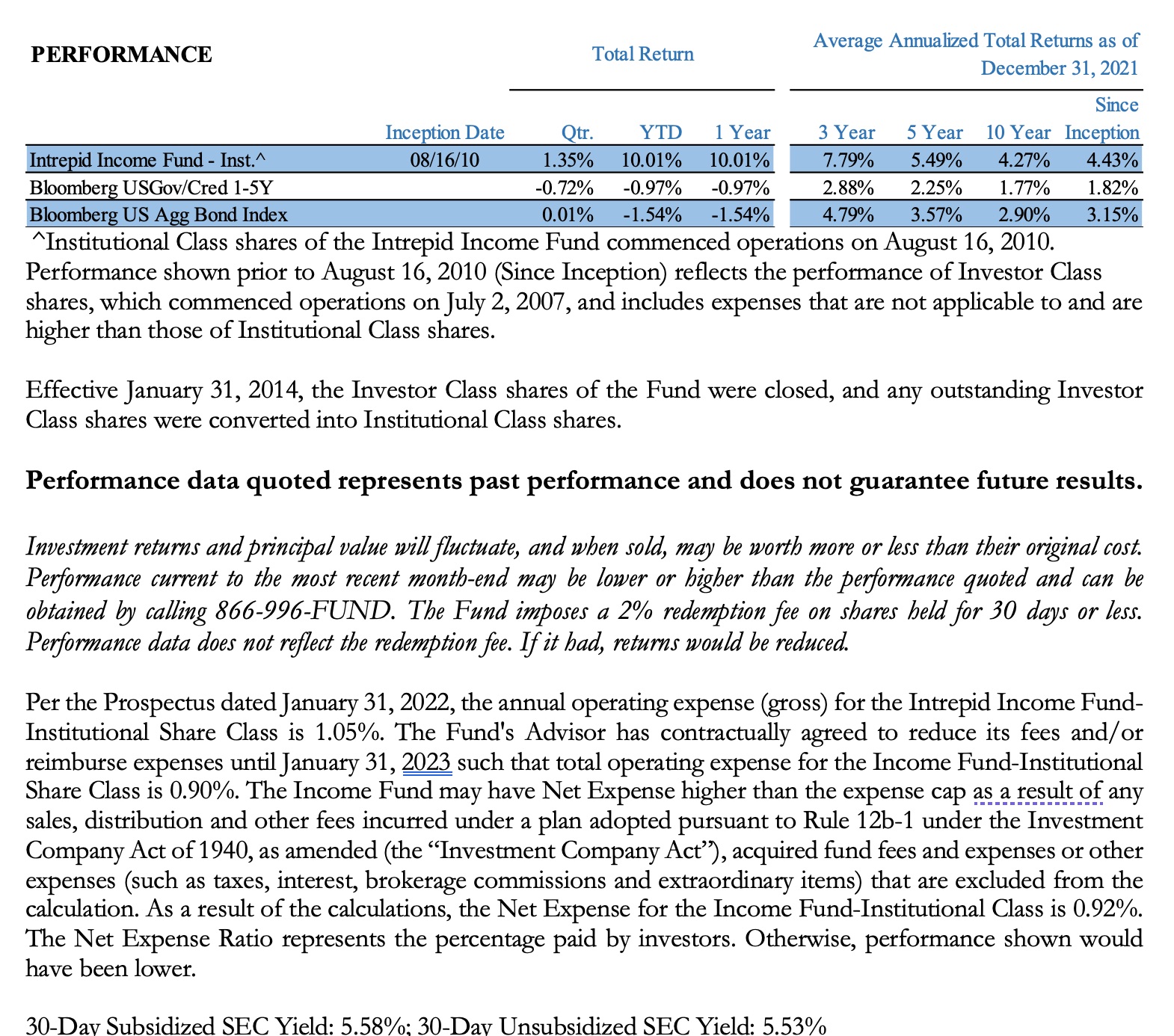 — from ‘Those Who Remain” by G. Michael Hopf

This time last year, we wrote that “taking on debt is like gaining weight – easy to put on but hard to take off.” As it turned out, corporate debt issuers ate well in 2021 and we believe that they are headed for some indigestion. 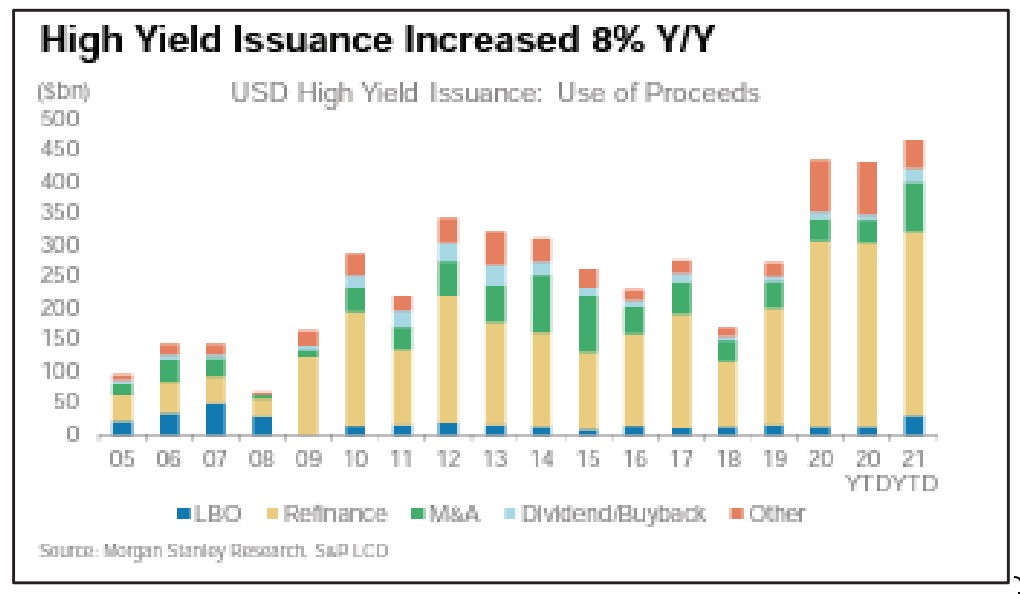 High yield issuance increased 8% year over year to the highest level on record, as shown in the chart from Morgan Stanley Research. The borrowing window was wide open for institutional loans as well, which also set a record for annual issuance. Meanwhile, there was a massive increase in the percentage of issuers with lower ratings. Nearly 20% of high yield issuance over the past year carried a CCC rating, double the number from the year before.

Indeed, demand for risk drove performance in the high yield asset class, with CCC-rated bonds massively outperforming other ratings buckets. We believe that part of the reason for this is the demand for yield in a 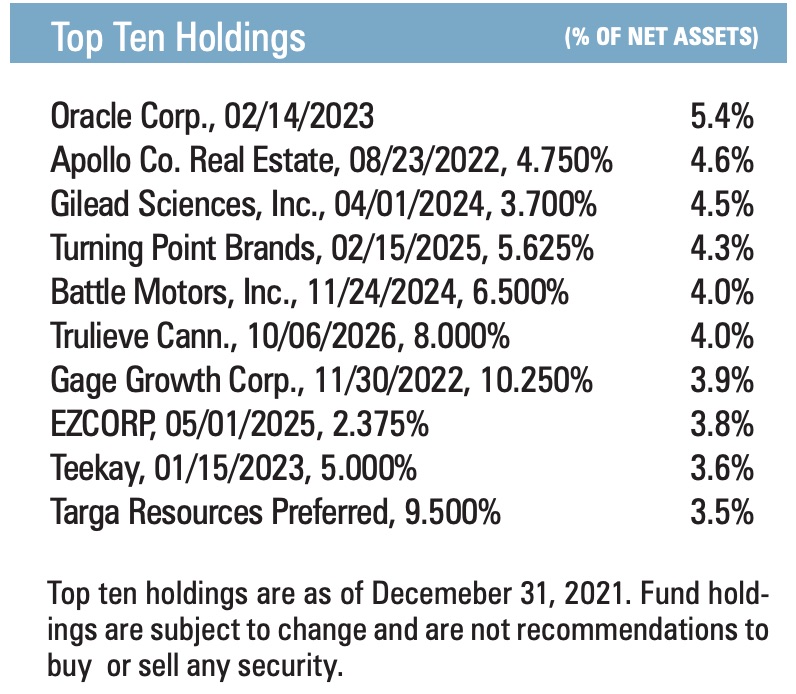 laughably low-yield environment. Some of the surge may also be attributable to the view that we are now early in a new credit cycle which, historically, is a great time to scoop up the riskiest debt.

Over thousands of years of recorded history, credit has always been cyclical. When leverage is cheap and easy, companies inevitably borrow too much. What usually follows these periods of gluttony are what Austrian economist Joseph Schumpeter described as “creative destruction.” During this destruction, some companies do not survive while others come back less fragile and more resilient.

There are investors out there who try and time these credit cycles. Theoretically, following a period like early 2020 when high yield spreads blew out, creative destruction should have taken care of the bad apples and left only the strongest borrowers behind. Applying that logic, one might think that right now is a great time to load up on the junkiest of the junk.

The problem is that this time is different. As we have written about in previous commentaries, instead of letting defaults happen like during the Great Financial Crisis, in 2020 the Federal Reserve stepped in and socialized credit risk, all but assuring investors that the government would backstop most junk bonds. What resulted was an artificially low number of defaults and the survival of what we would characterize as zombie companies. These are companies with insanely high amounts of leverage, little or no profitability, and no clear path to fixing those issues.

We believe many investors are drawn to these zombies for one reason – they carry meaningful yield. After all, at the end of the 4th quarter the only place to even find yield after adjusting for inflation was amongst CCC-rated credits! Still, we believe that the idiosyncratic risks for most of these issuers are much too high to justify owning them because of a view on the credit cycle.

We have always managed the Intrepid Income Fund (the “Fund”) with a bottom-up approach. We look at individual credits and lend to companies based on their creditworthiness, not on where we may or may not be in the credit cycle.

When we look across the menu of options available to credit investors today, it does not look very appetizing. However, we expect that to change soon as the Federal Reserve begins to tighten and unwind its balance sheet. Until then, we continue to prefer low duration credits with great fundamentals.

We are pleased with our recent performance. The Fund returned 1.35% in the 4th quarter, handily beating its benchmarks. The ICE BofAML US High Yield Index increased 0.66% over the same period. The Bloomberg U.S. Gov/Credit 1-5Y TR Index lost -0.72% and the Bloomberg US Aggregate Bond Index gained 0.01% during the quarter.

We had fifteen positions that were either called, matured, or were sold during the quarter. Most of our purchase activity was limited to positions we already owned. We plan to discuss several of our new positions in more depth in next quarter’s commentary.

Despite the pain we believe lies ahead for risk markets, we remain excited about the prospect of uncovering attractive credits and putting your capital to work through our disciplined investment approach.