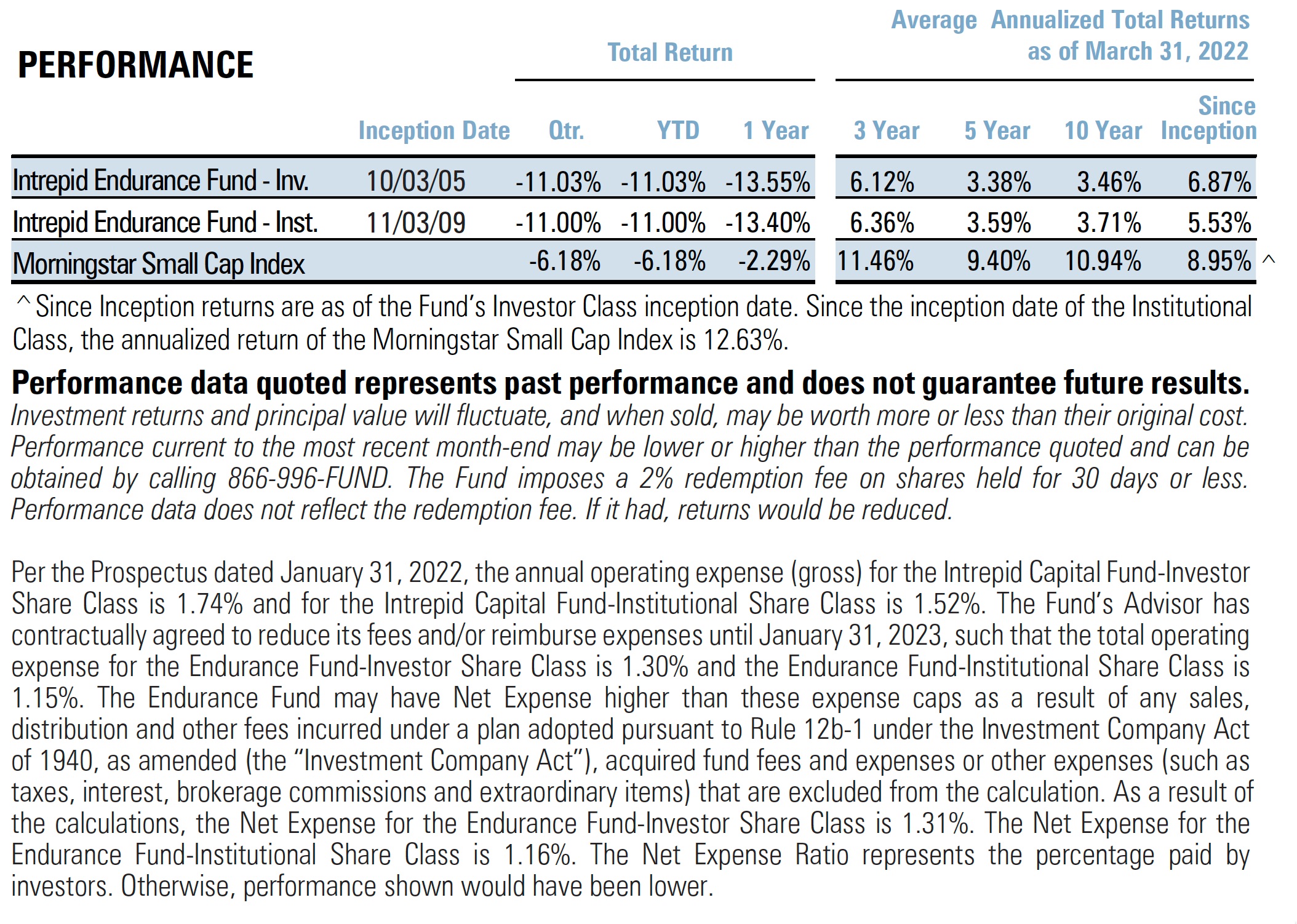 After rallying for 7 consecutive quarters, stocks (as measured by the S&P 500) recorded their first quarterly loss since the covid crash of Q1 2020.  There was good reason for investors to be more cautious, as the quarter had a little bit of everything: continued surging inflation, expectations of a more hawkish Fed, concerns of slowing economic growth, and heightened geopolitical risk following Russia’s invasion of Ukraine.

Still, it’s hard to say there is much fear in the markets today, as the Dow Jones Industrial Average and S&P 500 indices both ended the quarter within 6% of their all-time highs.  Small caps – which tend to be more economically sensitive – were a slightly different story.  The Russell 2000 had tumbled 14% by late January, but rallied to end the quarter down 7.53%.

For the quarter ended March 31, 2022, the Intrepid Endurance Fund returned -11.00%, compared to a return of -6.18% for the Fund’s benchmark Morningstar Small Cap Index.  This underperformance is disappointing, particularly given the Fund’s historical tendency to outperform during periods of falling prices.

For the six months ended March 31, 2022, the Intrepid Endurance Fund returned -7.82% versus -2.67% for the Fund’s benchmark Morningstar Small Cap Index.

We have written in prior letters that the Fund will tend to be more fully invested going forward when compared to its history, and that exposure will be more concentrated in companies we believe have sustainable competitive advantages that are driving structural market share growth.  While we expect this approach to work well over multi-year periods, it has not served us well in the past few quarters.  Although we were pleased with the operating results and outlooks for the companies that the Fund owns, we fell victim to violent sector and factor rotations during the quarter, and many of our faster-growing holdings saw their multiples compress.  We have made a few minor adjustments to our positioning, but our overall posture and strategy remains consistent.

Perhaps the most notable development during the quarter was the continued increase in inflation, and the risk that poses to the ultra-loose monetary policy the US has enjoyed during most of the last decade.  Instead of a

bating, as many market commentators predicted, inflation accelerated higher, ending the quarter with the highest recorded change in Consumer Price Index (CPI) since 1981!  Recent results of the businesses we follow confirm this trend, as nearly every single one is raising prices to combat their swelling input costs.

We’re not sure what the path of inflation is from here, but we do believe the risk of “higher for longer” has increased since the last time of our last commentary.  Accordingly, we have tweaked the portfolio by (1) reducing exposure to positions we anticipate to fare worse in a more inflationary environment, and (2) slightly increasing the amount of cash in the portfolio.  Regarding the former, we sold Camping World Holdings (CWH) and Naked Wines (WINE LN), two recent additions to the Fund, early during the quarter.  We think both are good businesses and are open to owning them again at more attractive valuations.  The Fund ended the quarter with a cash level of 8%. In the event of more volatility, we hope to deploy that into attractive opportunities.

On the other hand, we increased exposure to businesses whose stocks were punished due to supply chain issues we believe are temporary, but who are seeing very strong demand.  Notable examples included the technology hardware companies Fabrinet (FN) and Silicom (SILC).  To a lesser extent, it also included homebuilder LGI Homes (LGIH).  We view the Fund’s long-term perspective as one of its key advantages, and are confident betting that supply chains will eventually recover and that companies with structural demand growth will disproportionately benefit.

We made two notable sales during the quarter:

The only major new position purchased by the Fund was Atento SA (ATTO).  Atento is the leading business process outsourcer in South America and is in the late stage of a turnaround following the implementation of new management in 2019. The company has experienced accelerated top line growth and significant margin expansion the last several years, yet still trades at a low valuation due to investors’ disregard for the more volatile Latin American economies as well as a very illiquid stock. The illiquidity is driven by an unusual shareholder base, with roughly two-thirds of the shares held by institutional credit investors. These controlling shareholders have a lock-up that expires in Q2 2022 and there was recently a news story that they have hired an investment bank to evaluate strategic alternatives for the company. We have invested in ATTO due to its improved operating results and cheap valuation, but would not be disappointed if the company was sold to a strategic or financial buyer.

The largest detractors to performance were:

The top contributors to performance were:

It was another frustrating quarter to be a cannabis investor, as these positions once again significantly underperformed the broader indices.  Unfortunately, these stocks continue to trade almost entirely based on expectations of regulatory change instead of their fundamentals.  Institutional investors have still had a tough time entering the industry, which has created some of the most inefficiently priced securities we have come across.  We think two recent examples highlight this inefficiency:

It’s likely that some type of regulatory change (perhaps banking reform) will be the catalyst that allows a wider pool of investors to access the industry, which we think will create capital inflows and a re-rating of multiples.  The Senate is expected to introduce a sweeping legalization bill in April.  While most do not believe the bill has enough support to pass, many industry insiders think key senators would then pivot to focus on reform that is easier to pass.  Although we do not have a strong view on the timing of such legislation, we strongly believe it is a matter of “when” and not “if.”

We continue to remain very bullish on the cannabis businesses that the Fund owns, believing that the incredible growth in demand, government-restricted supply, and cheap EBITDA multiples will ultimately result in attractive prospective returns for the Fund.  However, we have allowed the Fund’s exposure to this industry to shrink as prices have come down.  Despite the seemingly more attractive valuations, we recognize that this industry trades very unconventionally and we would like to reduce concentration risk ahead of upcoming developments on the regulatory front.  The Fund ended the quarter with 11.7% invested in the cannabis industry, which is split between three companies which we view as the highest quality businesses in the industry.

Although it was a slower than expected start, we remain optimistic about the remainder of the year.  The Fund has concentrated exposure to companies that we believe have significant competitive advantages, talented management teams, strong balance sheets, and trade at reasonable valuations.  We remain laser focused on identifying the best small cap opportunities that share these characteristics instead of trying to predict which sectors will be in favor next quarter or the direction of macroeconomic indicators.  Over longer-term periods, we expect this to produce attractive risk-adjusted returns.

Thank you for your trust and investment. Our capital is invested alongside yours in the Fund and we remain very optimistic about its future.