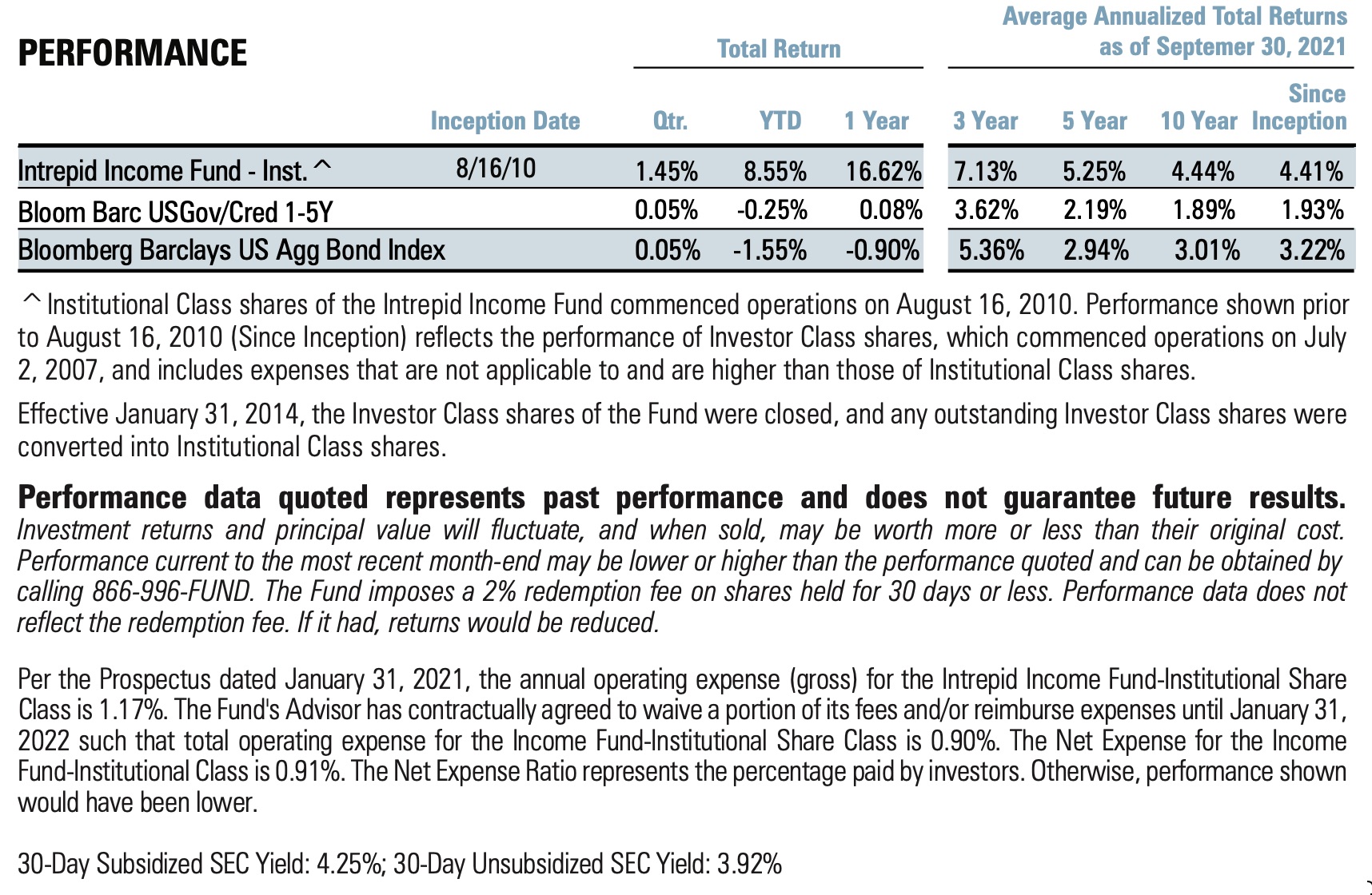 “Inflation is just like alcoholism. In both cases, when you start drinking or when you start printing too much money, the good effects come first. The bad effects only come later.”

We are pleased to report that The Intrepid Income Fund (the “Fund”) gained 1.45% for the quarter ended September 30, 2021. General fixed income performance for the third quarter was mixed. Rates round tripped, with the 10-Year Treasury ending September yielding 1.52%, 7 basis points above the end of last quarter. That translated into flat performance for the duration-heavy Bloomberg Barclays US Aggregate Index (the “Barclays Aggregate Index”), which rose 0.05% for the quarter ended September 30, 2021. Similarly, the ICE BofAML US Corporate Index (the “Corporate Index”) returned -0.06% over the same period. Riskier debt continued its recovery on the back of improved earnings, with the ICE BofAML High Yield Index (the “HY Index”) gaining 0.94% in the quarter. The shorter-duration Bloomberg Barclays US Govt/Credit 1-5 Year Total Return USD Index (the “1-5 Year TR Index”) returned 0.05% over the same period.

The Fund’s success during the third calendar quarter was primarily attributable to idiosyncratic security performance, but we also benefited from a positive overall environment for risk assets. Our top contributors for the three months ended 9/30/2021 included:

Our only material detractor for the three-month period ended 9/30/2021 was:

The Income Fund had two corporate bond positions that were called or matured in the third calendar quarter. We also reduced one position after it hit our internal yield bogey, selling out of our Terrascend 12.875% Notes due 12/18/2024 entirely.

The proceeds from the bonds that were called, sold, or matured were redeployed into a mixture of existing positions and new positions, including:

We continue to persevere through these frothy times by scouting for strong ledges in the capital structure and by lending to companies that remain disciplined despite the temptations of cheap leverage. We would be lying if we claimed to know what will happen if and when the Federal Reserve raises interest rates and whether inflation will truly be transitory or not. However, we are confident that the companies we are lending to have the ability to potentially mitigate the insidious impacts of an inflationary environment and that our short duration bias should allow us to remain nimble.

At the end of the third quarter, the portfolio had a yield-to-worst of 5.9% and an effective duration of 2.3 years.