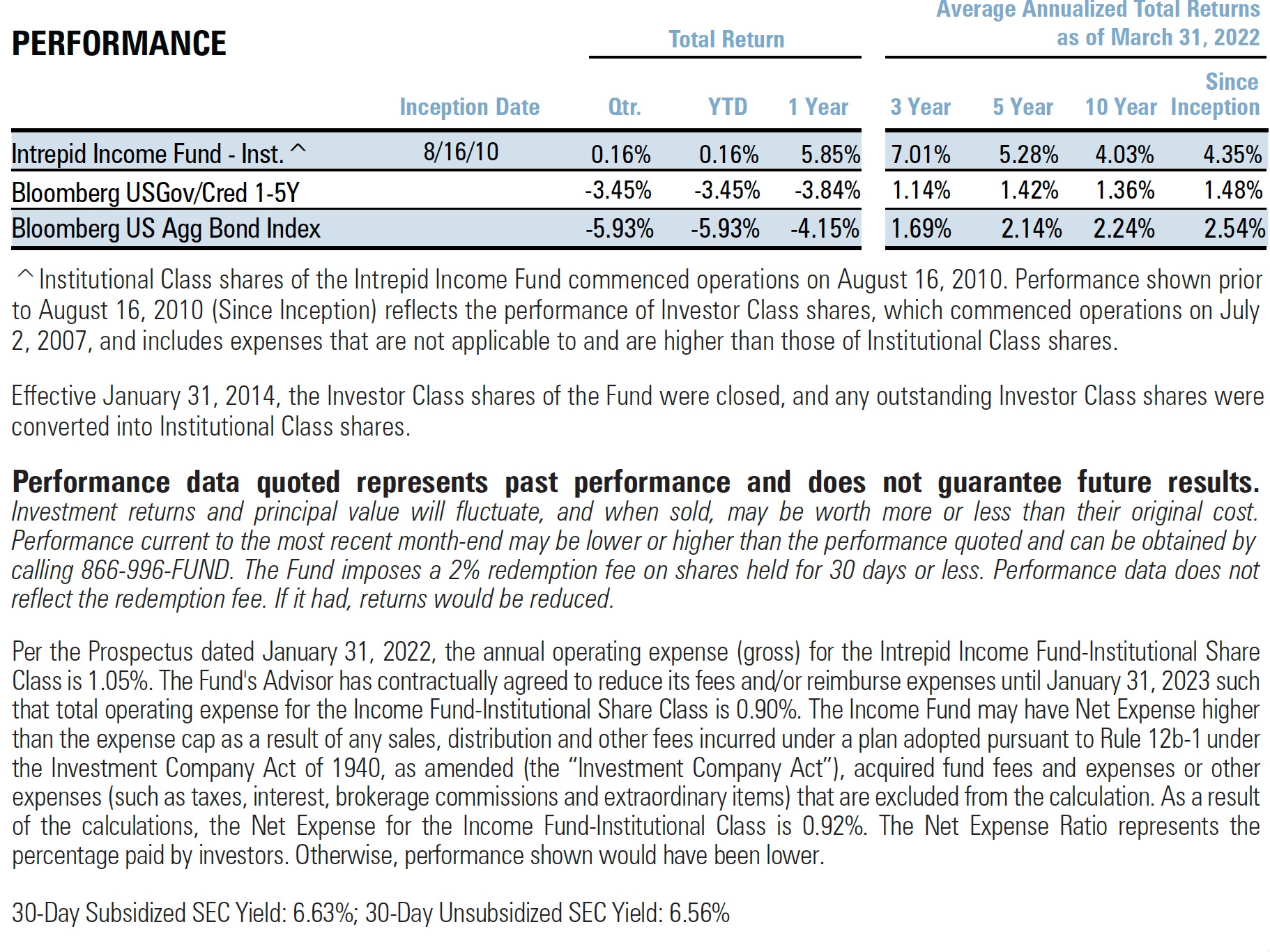 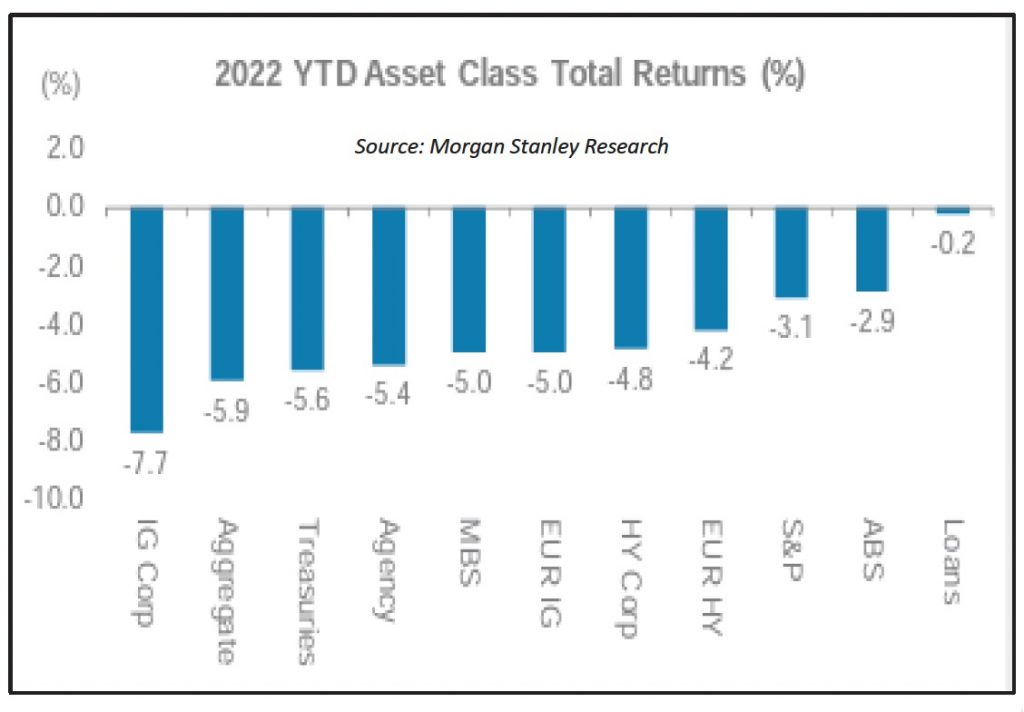 There was nowhere to hide for investors in the first quarter of 2022.  We witnessed a pernicious combination of accelerating inflation and rising rates that dented every major asset class.  Income-oriented investors were especially affected by the rise in the cost of borrowing, which skewered long-duration bonds.  Treasuries and investment-grade bonds sold off significantly more than junk bonds, and even equity indices, as investors repositioned for the end of an overly accommodative Federal Reserve. 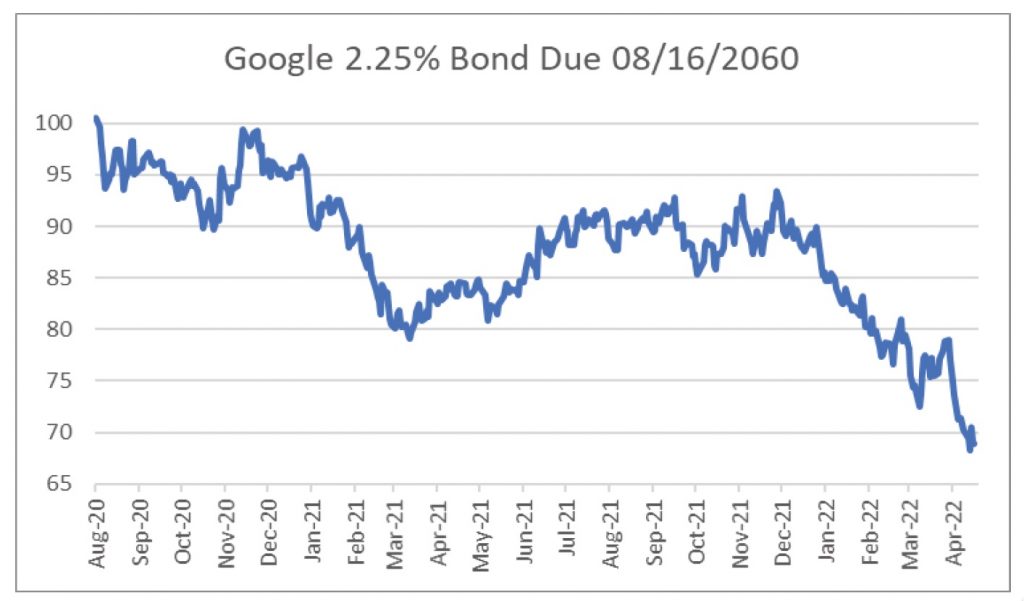 It turns out that low-single-digit coupons on long-dated fixed income securities are not especially attractive in a normalized environment.  Take Google’s 2.25% Senior Unsecured Bond due in 2060.  These bonds were issued in August 2020 when the 30-year Treasury was yielding a measly 1.25%.  The chart to the left highlights how brutal duration risk can be. These bonds have sold off over 30% since issuance as rates have moved higher.

Our last several commentaries have outlined the peril of long-duration assets and what might happen if/when inflation spurs the Federal Reserve to act.  Fed fund futures are now predicting an effective rate of 2.735% by the end of the year compared to an effective rate of just 0.33% today.  It is hard for us to imagine anything but pain for fixed income indices if rates move that much that quickly.

We wish we could predict with certainty what will happen next.  Perhaps inflation has already peaked and now is a great time to buy long-duration assets.  Or perhaps inflation continues to accelerate, and we are headed for a recession as stimulus from the pandemic wears off and businesses fail to pass along higher input costs.  We believe that the Intrepid Income Fund (the “Fund”) is well-positioned for either scenario.

The primary goal of the Fund is to make money in any environment.  To that end, we are pleased to have gained 0.16% for the quarter ended March 31, 2022.  We accomplished this result through a mixture of careful underwriting and a focus on short-duration credits that are not as susceptible to the duration risk we discussed in the introduction.  We detail specific contributors and detractors for the Fund later in the commentary.

The beauty of our strategy is that we are constantly able to redeploy capital from maturing securities into the market. 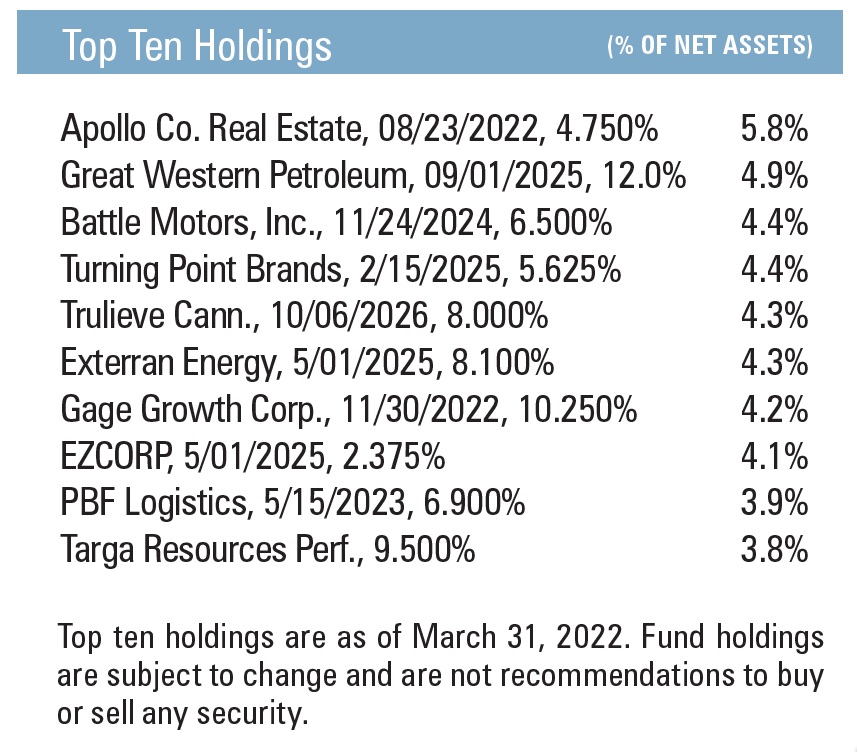 For instance, we expect nearly 1/3 of the Fund’s current positions to be called or to mature before the end of 2022.  In a rising rate environment, this liquidity allows us to take advantage of more attractive prices on bonds as yields increase and prices fall.  Hence, we expect to continue enhancing the Fund’s yield profile to keep up with inflationary pressures.

At the end of the first quarter, the yield-to-worst on the Fund was 7.44%, nearly 200 basis points higher than at the end of the prior quarter. Combined with our emphasis on smaller issue sizes, our strict underwriting criteria, and our short duration bias, we believe we are tailor-made for this environment.

The chart below shows how our Fund’s metrics compare to various fixed income benchmarks.

Outside of the Fund, fixed income performance in the first quarter was down across the board.  The duration-heavy Bloomberg US Aggregate Bond Index (the “Bloomberg Aggregate Index”) dropped -5.93% for the quarter ended March 31, 2022 and the ICE BofAML US Corporate Index (the “Corporate Index”) returned -7.74% over the  same period.  Riskier debt also suffered, with the ICE BofAML High Yield Index (the “HY Index”) losing -4.51% in the quarter.  Even the shorter-duration Bloomberg US Govt/Credit 1-5 Year Total Return USD Index (the “1-5 Year TR Index”) lost -3.45% over the same period.

Our performance vs. benchmarks is summarized in the table below.

The Fund’s success during the first calendar quarter was primarily attributable to idiosyncratic security performance, but we also benefited from our lack of exposure to longer duration credits.  Our top contributors for the three months ended 3/31/2022 included:

Both ZEV and GRTWST were also top contributors for the six months ended 3/31/2021, along with:

Our top detractors for the three-month period ended 3/31/2021 all had one thing in common: a longer-dated maturity.  Although the vast majority of the Fund’s holdings are concentrated in short duration credits, we occasionally lend to exceptional companies for longer periods of time.  These positions included:

Both CNSL and RAX were also top detractors for the six months ended 3/31/2021, along with:

The Income Fund had four corporate bond positions that were called or matured in the first calendar quarter.  We were very active in reducing or selling out of positions as they hit our internal yield bogey, or presented too much duration risk, completely exiting ten of our holdings.  The proceeds from the bonds that were called, sold, or matured were redeployed into a mixture of existing positions and new positions, including: 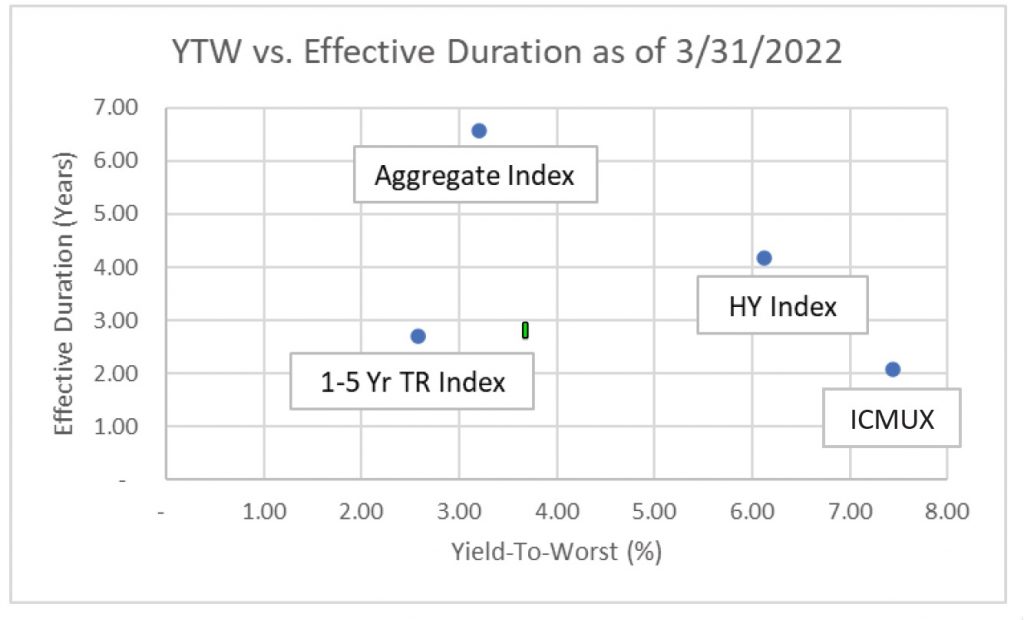 Looking back over the past several quarters, we could not be more pleased with the way our strategy has worked in a volatile, rising-rate environment.  We are especially proud of the fact that we were up more than our benchmarks during last year’s bull market run and subsequently have made money so far this year during a sharp sell-off in nearly every asset class.

As the graph below shows, our short duration bias and high yield profile makes us a unique choice verses our benchmarks.  As rates continue to move higher, we think it is likely that we will continue to enhance our yield profile while keeping a relatively low effective duration.

However, as inflation continues to wreak havoc, and rising rates dislodge stubbornly low yields on certain longer-dated fixed income securities, we will continue to stay open-minded.  The portfolio will always have a bias towards short-dated credits, but, at a certain point, we believe that there will be a golden opportunity to lend further out at attractive returns.  Until then, we will continue to sink the three-foot putts.