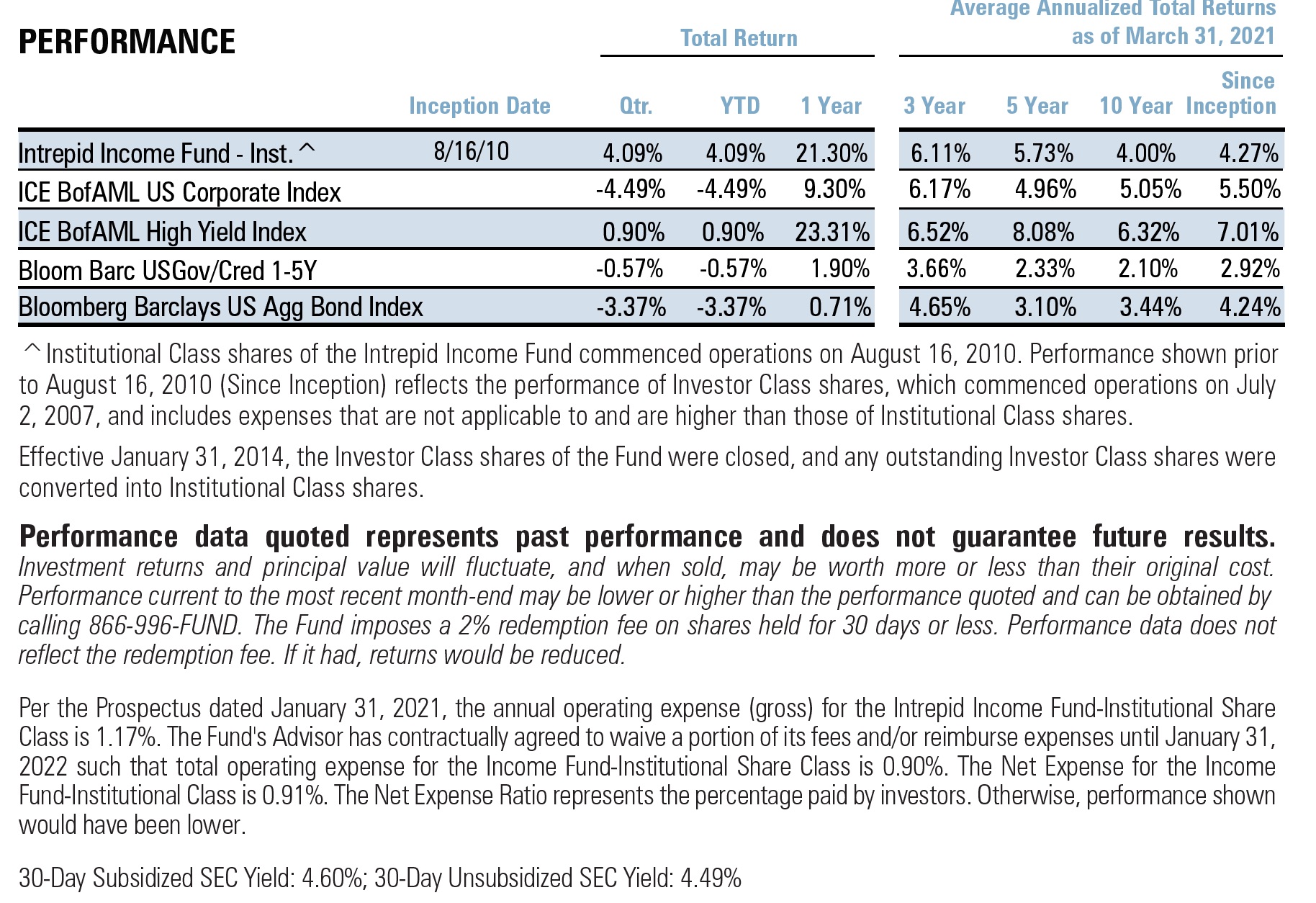 Vaccines for COVID-19 have been distributed across the US at a blistering pace.  At the same time, a different type of vaccine is being injected into the American financial system.  It has also been administered at a rapid pace and has temporarily halted the spread of financial collapse. 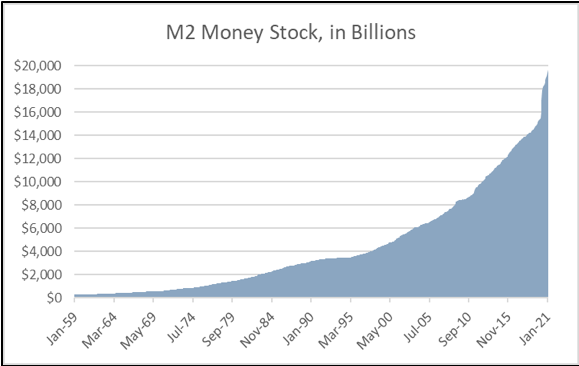 We are speaking, of course, about money printing.  As the chart to the left shows, the M2 money stock has grown asymptotically since the onset of COVID-19.  In addition to M1, this measure also includes savings deposits and money market accounts.  Alongside direct injections of liquidity into American’s bank accounts, the Federal Reserve has administered this liquidity by purchasing corporate bonds and continuing to expand its balance sheet through Treasury purchases. 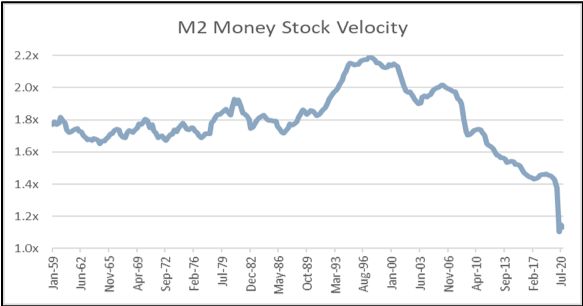 Many have applauded the Federal Reserve’s decision to rapidly inject money into the system.  After all, the dollars printed for stimulus programs, direct deposits, and corporate credit facilities kept many small businesses afloat and food on people’s tables.   Just like virologists had not seen something like COVID-19 before, economists had not seen anything like the rapid shutdowns that accompanied the virus.

But eventually, we must deal with the fallout from the borrowed money.  As the chart above shows, the velocity of money has fallen to a 60-year low. This measures the frequency a unit of currency is used.

It is logical for the velocity of money to slow down as people hunker down at home.  But as consumption habits normalize, what will happen?  Many believe a resumption of normal activity will lead to elevated inflation that will be difficult for the Federal Reserve to control.  Others have argued that the velocity of money will not pick back up anytime soon, which could even lead to deflation. We believe our short duration credit strategy will continue to perform well in either scenario.

For now, the Federal Reserve’s “vaccine” has bolstered credit markets to new all-time highs.  Last week, yields for CCC-rated bonds, the riskiest slice of the market, dropped to an all-time low of 6.10%.  This time last year, there was over $1 trillion of distressed bonds and loans in just the US alone, which today has shriveled to less than $100 billion, according to Bloomberg.  Any and every high yield issuer is rushing to lock in record-low rates as primary supply continues to vaporize previous records.  There remain plenty of attractive securities amidst the frothiness, but we believe it has never been more important to know and understand the businesses to which one lends capital.

Fixed income performance in the first quarter was mixed.  Rates rose to welcome the new decade, with the 10-Year Treasury ending the quarter at 1.74%, nearly double its yield to start the year.  Accordingly, the duration-heavy Bloomberg Barclays US Aggregate Index (the “Barclays Aggregate Index”) dropped -3.37% for the quarter ended March 31, 2021 and the ICE BofAML US Corporate Index (the “Corporate Index”) returned -4.49% over the same period.  On the other hand, riskier debt continued its recovery, with the ICE BofAML High Yield Index (the “HY Index”) gaining 0.90% in the quarter.  The shorter-duration Bloomberg Barclays US Govt/Credit 1-5 Year Total Return USD Index (the “1-5 Year TR Index”) returned -0.57% over the same period.  We are pleased to report that The Intrepid Income Fund (the “Fund”) gained 4.09% for the quarter ended March 31, 2021.

Our performance vs. benchmarks is summarized in the table below.

The Fund’s success during the first calendar quarter was primarily attributable to security selection, but we also benefited from a positive overall environment for risk assets.  Additionally, we are very pleased with how our short duration focus has protected your capital in the face of rising rates.

Our top contributors for the three months ended 3/31/2021 included:

Both TPB and GRTWST were also top contributors for the six months ended 3/31/2021, along with:

We had only one material detractor for the three- and six-month periods ended 3/31/2021:

The Income Fund had seven corporate bond positions that were called or matured in the first calendar quarter.  We also reduced several positions as they hit our internal yield bogey, selling out of our Nordstrom 6.95% Notes due 3/15/2028 and ServiceMaster 7.45% Notes due 8/15/2027, entirely.  The proceeds from the bonds that were called, sold, or matured were redeployed into a mixture of existing positions and new positions from borrowers we have lent to before, including:

We remain cautiously optimistic about the prospects for economic recovery, and continue to hunt for short-dated, high-yielding securities issued by credit-worthy companies.  We endeavor to find securities that do not operate with an unhealthy reliance upon the mercurial credit window, preferring those rare borrowers that view leverage as a bridge to a destination, not an endless highway with increasingly expensive fuel stops.

We anticipate some volatility over the next several quarters, which may present excellent buying opportunities in credit markets, and remain committed to our short duration bias as an organic way to maintain some “dry powder”.

Looking back over the past year, we could not be more pleased with the way our strategy has worked.  Going into last March, we were able to redeploy cash from maturing short duration positions into attractive, sometimes longer-dated positions at a time when liquidity was hard to come by.  At certain times, it was almost a “name your price” exercise, where forced sellers had no choice but to unload creditworthy positions at deep discounts.

As the graph below shows, our short duration bias hedged us from the brunt of last year’s selloff and allowed us to quickly redeploy capital at great prices.  We have slowly trimmed or sold many of the positions we piled into as those credits hit our yield bogeys, but we believe we will have ample opportunities to purchase bargain securities in the future as more bargains avail themselves.

As we discussed earlier, a debate is raging on whether inflation might accelerate on the back of unprecedented money printing.  We have no superior forecasting ability when it comes to something as complex as inflation.  We do, however, take solace in how our short-duration bias and careful credit work has protected and rewarded investor capital over the past year, and continue to believe our strategy will generate attractive absolute returns.

In the event inflation does begin dislodging stubbornly low yields on certain longer-dated, creditworthy fixed income securities, we will have the nimbleness, afforded by our short duration bias, to redeploy capital if/when we deem it to be an attractive opportunity for the commensurate risk.