Global markets continued to experience higher volatility in the second quarter.  Unlike Q1, much of the action took place in emerging markets.  Stock indexes in China and Brazil slumped into bear market territory.  The mood domestically was much improved, however, particularly for those with an affinity for black gold and sexy stocks.  The NASDAQ and Russell 2000 roared back to new all-time highs in the quarter.

Fixed income returns varied widely by asset class.  The Treasury curve shifted well higher across much of the shorter end, and more moderately out to 20 years.  The benchmark 10-year rate rose 12 basis points to 2.86%.  Higher rates negatively weighed on investment grade debt, as the Bloomberg Barclays US Aggregate fell -0.16% in the second quarter.  Investment grade corporates suffered another poor quarter as spreads continued to widen from nearly the tightest levels in history.  While investment grade credit quality certainly isn’t poor, standard credit metrics, such as debt-to-EBITDA, are significantly worse than they were prior to the credit crisis.  Despite this, earlier this year investors were accepting the lowest spreads in a decade.  Spread widening, combined with higher risk-free rates, handed the ICE BofAML US Corporate Index another meaningful loss totaling -0.94%, bringing the year-to-date loss to -3.12%.  However, the high yield market was quite resilient in the second quarter.  Spreads ended the quarter flat, but with some volatility throughout the period.  The ICE BofAML High Yield Index returned a tad less than one quarter of its annual coupon, gaining 1.00% in the period.  We also track the ICE BAML 1-5 Year BB-B Cash Pay Index, which we believe is more representative of the high yield ideas we seek.  This index returned 1.14% in the quarter. 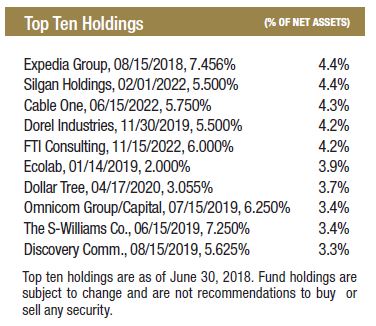 The Intrepid Income Fund (the “Fund”) gained 0.52% for the quarter ended June 30, 2018.  The period appears relatively boring when examining the contribution of each security.  Nearly every holding produced a small return.  While the Fund has a large allocation to investment grade corporate bonds (approx. 42% at quarter-end), nearly all of these issues mature in the next 14 months.  This muted the impact of rising Treasury yields.  Our high yield positions mostly outperformed in the quarter, but there were no material contributors, which we define as having an impact of 10 basis points or more.  There were also no material detractors.

The only material contributor to the Fund’s second quarter performance was an equity security.  Baldwin & Lyons common stock (ticker: BWINB) gained more than 12% in the second quarter and reached its highest level since 2016.  A decent quarterly earnings report, the resignation of the controversial chairman, and higher than normal industry M&A activity were probably the primary factors that pushed the stock up.  The strength of the U.S. small cap market certainly didn’t hurt either.  While we still view the stock as undervalued, we exited our small position in this thinly traded stock.

Last quarter we discussed two positions that warrant further updating.  We reported to you that our position in Primero Mining’s convertible bonds would be retired when First Majestic completed its acquisition of the company.  That deal was concluded in May and we received par for our remaining bonds.  We also informed you that we were completing further due diligence on Retail Food Group (ticker: RFG AU).  RFG is an Australian restaurant franchisor that owns several concepts in the bakery, coffee, and pizza categories.  The Fund’s investment in RFG equity was a significant contributor to performance in late 2017, but that reversed in the first quarter of 2018 after the firm reported its semi-annual results.

RFG’s stock has been battered by a series of negative articles released by an Australian investigative reporting outfit.  While grounded in reality, we believed many of the claims made were overly sensational, but we were having trouble confirming or denying the information without interviewing franchisees and seeing the stores for ourselves.  Our attempts to make contact with franchises by telephone were mostly fruitless.  We decided we needed boots on the ground, so we sent two analysts to Australia to visit stores and interview as many franchise owners as possible.

Matt Parker and Hunter Hayes did a great job acquiring the information we needed.  Unfortunately, their work confirmed our worst fears.  Their conversations with franchisees were almost unilaterally negative across RFG’s major regions.  Additionally, the condition of the store base is significantly worse than we expected.  Many of the stores are located in traditional malls, where competition is fierce and rents are high.  We thought we were buying the Australian version of Dunkin Donuts, but instead we got the Australian version of pizza chain Sbarro (which declared bankruptcy several years ago).

The trip made it clear that management has been consistently misleading us about the quality of the store base, among other things.  Matt and Hunter’s account of their meeting with the CEO at a Brisbane coffee roastery is one of the most ridiculous stories I have heard in my career.

We concluded our additional work in late April and immediately proceeded to exit the position, which was completed by the end of May.  While RFG’s stock continued to decline over that period, our position was small enough not to meaningfully detract from the Fund’s performance.

The Fund’s two largest positions matured in the second quarter.  Both issues were short-duration investment grade securities that we believed were attractive in an environment where most of our core high yield universe offered few opportunities, and short-term Treasury securities provided meager yields.  We first purchased Total Systems Services’ notes in early 2016 after the Federal Reserve raised its benchmark rate for the first time in nearly a decade.  Our position in Dollar General’s notes was initiated in the first and second quarters of 2017.  Both positions outperformed comparable maturity Treasury securities by a significant margin despite what we believed to be very low credit risk.  Additionally, several other short-duration investment-grade positions matured or were sold to redeploy funds into more attractive securities.

The combination of higher Treasury yields, wider investment-grade spreads, and stable high-yield spreads allowed us to effectively redeploy capital into new and existing ideas.  We increased the sizes of several of our core high yield bond positions and initiated positions in four new high yield ideas in the quarter.  In addition, we uncovered a number of investment grade corporates sporting attractive yields and maturing in one year or less.

Cimpress NV (ticker: CMPR) is a Netherlands-based printer and graphic designer that provides individuals and businesses with a broad range of marketing materials across the globe.  The company’s crown jewel is business card maker Vistaprint, which is likely well-known to readers due to its television advertising campaigns.  The Upload and Print business consists of a network of websites and printing facilities, mostly in Europe, that help customers design and create marketing and promotional materials.  National Pen is a leading supplier of writing utensils.  At first glance, the business appears to be operating in a structurally declining industry with few competitive advantages.  However, Cimpress’s management has created a world leader in “mass customization.”

The industry has typically been characterized by high operating leverage.  To charge a reasonable price, printers need to print a high number of identical or very similar business cards to overcome the fixed costs and achieve a profit.  Local print shops typically handled small orders from the community but would justifiably need to charge more.  Over the last decade, Cimpress has developed a supply chain capable of providing customized products at mass-produced prices.  At Vistaprint, an order of 250 business cards requires “less than 14 seconds of human labor for all of pre-press, printing, cutting and packaging.”  These tasks consume an hour or more at traditional small printers.

The company has applied the same model to other types of marketing materials for small and medium-sized businesses.  Cimpress is moderately leveraged at close to 3x debt-to-EBITDA and has the ability to generate significant free cash flow.  We purchased the 7% notes due 4/01/2022 at what we believed was a very attractive yield.  Unfortunately, the company surprised us with a new note issuance just a few weeks after our purchase, and it called our notes after a short holding period.  We are hopeful Mr. Market will provide us with an opportunity to purchase the new notes.

As we reported to you last quarter, we are seeing more opportunities to deploy capital into income-producing ideas as a result of higher risk-free rates.  At the end of the quarter, the Fund had just 3.2% in cash and equivalents.  Our short-term investment grade holdings have laddered maturities over the next few quarters, which will allow us to reinvest your capital at higher rates, should yields continue to move higher.  Ideally, we will unearth more solid high yield ideas yielding significantly more than U.S. Treasury securities.  We continue to work diligently on your behalf.