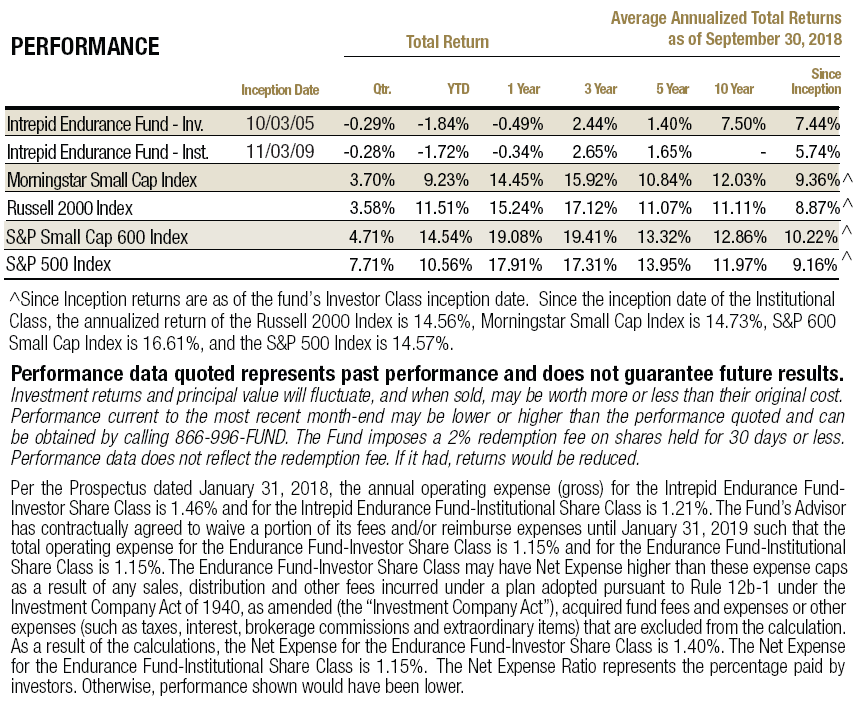 The third quarter of 2018 was another good one for small cap stocks.  The Russell 2000 returned 3.58%, while the Morningstar Small Cap and S&P Small Cap 600 indexes returned 3.63% and 4.71%, respectively.  Small cap U.S. stocks have been a favored trade in 2018, as concerns over global trade relations have pushed investors toward smaller companies with less international exposure.

As absolute return investors, we have largely remained on the sidelines and refuse to overpay for securities just because they might suffer less than their large cap counterparts in an environment of higher tariffs and escalating acrimony between the U.S. and its trade partners.  Our past several commentaries have consistently warned about the perils of investing in this overvalued, long-in-the-tooth bull market.  While we won’t speculate on the timing or cause of an eventual correction, there are a few recent developments that make us optimistic.

Notably, yields have moved sharply higher and are now beginning to offer investors a more enticing alternative to equities.  In addition, the performance of the S&P Small Cap 600 fell 3.32% in September, compared to an increase in the S&P 500 of 0.57% – the largest monthly divergence in four years.[1]  With higher multiples and more leverage than large cap stocks, we have long held that small caps have not been the safest place for investors to hide.

Another consequence of higher yields is that small cap companies will have a tougher time servicing the large debt piles they have accumulated during years of artificially suppressed interest rates and easy access to leverage.  As of the writing of this letter, total net debt divided by total EBITDA of the Russell 2000 stood at 4.98x, or over one turn higher than at the tail end of the last bull market (2006-2007).

These variable rates mean that small cap companies will feel an immediate squeeze on their income statements as rates lift.  Many of these companies produce miniscule or negative operating profit and would have already been forced to restructure or exit the market in a more “normal” rate environment.  We welcome market weakness and volatility that might come from a cyclical credit squeeze, as it should allow us to deploy capital at more attractive prices and higher expected returns. 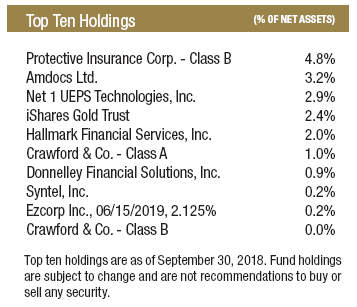 Before getting into performance, we wanted to note an important update about the management of the Intrepid Endurance Fund (“the Fund”).  On September 10th, Jayme Wiggins was terminated as lead portfolio manager of the Fund.  We are grateful for the efforts and discipline he contributed while at Intrepid and wish him all the best in the next chapter of his career.  Unfortunately, the Fund’s performance over the last several years has not met our expectations.  I, Mark Travis, will now serve as portfolio manager of the Fund, and assisting me will be research analysts Matt Parker, CPA and Hunter Hayes.

Importantly, there will be no major changes to the investment process and our rigorous approach to evaluating securities.  However, as we continue our search for undervalued stocks, we would anticipate the Fund gradually becoming more invested and holding less cash.  We also plan to employ more stringent qualitative research parameters, resulting in a tilt toward higher-quality businesses that compound value over time.

For the quarter ended September 30, 2018, the Fund returned -0.28%.  The top two contributors to performance were Hallmark Financial Services (ticker: HALL) and Crawford & Company (ticker: CRD/A).  Hallmark reported a second consecutive quarter of underwriting profit, following several quarters of rough underwriting results in 2017.  Poor results have stemmed from Hallmark’s commercial auto insurance division.  The challenges have been industrywide, but there are signs that conditions are improving.  Insurers in this market niche have been aggressively hiking rates, and some competitors have retreated from the market.  The industry tends to be cyclical, so we expect results to gradually improve.  The business is trading at a discount to tangible book value and we continue to believe it is an attractive place for our capital.

Crawford was a new purchase for us in the prior quarter and has performed well since our investment.  The company recently reported its third consecutive quarter of organic revenue growth, and management noted several signs of accelerating momentum.  We think the company may be beginning to emerge from its lackluster growth phase.

Gold prices continued to fall in the third quarter due to the continued strength of the dollar and a hawkish Federal Reserve.  We like our position in the precious metal as we believe that it provides a suitable hedge against an overvalued market in the short term, and a long-term hedge against loose monetary policy and high global indebtedness.

Baldwin & Lyons changed its name to Protective Insurance Corporation in August in order to align the holding company name with the name of the underwriting subsidiary.  There were no major developments for the company during the quarter, and we believe the company will benefit from the aforementioned cyclical recovery in commercial auto insurance.  In the meantime, the stock continues to offer an attractive dividend yield near 5%.  Like Hallmark, Protective also trades below its tangible book value.

Net 1 UEPS Technologies (UEPS) reported its fiscal year results a few weeks ago. It’s been a volatile year for UEPS shares as the company prepared to end its long-held contract with the South African Social Security Agency (SASSA).  As of October 1, the contract is no more.  After years of negative publicity, extensions, and uncertainty about the replacement vendor, we view the completion of the welfare distribution contract as a net positive that will allow management to focus on the company’s bright future. UEPS’ fast-growing EasyPay Everywhere (EPE) banking offering will offset much of the foregone revenue, and our hope is that UEPS will no longer be the South African media’s scapegoat for the myriad issues plaguing SASSA.

Just before writing this, the Supreme Court of Appeal of South Africa ruled in UEPS’ favor to continue letting grant recipients choose any bank account they like to receive their grant payments. Furthermore, recipients can transact freely with any service provider, utilizing the full functionality of their bank accounts with the money from those grant payments. This bodes well for EasyPay Everywhere (EPE), as grant recipients can continue receiving grant money in their EPE accounts and, in turn, utilize UEPS’ vast financial services infrastructure.  That infrastructure includes the most extensive distribution network of mobile and fixed ATMs in South Africa (~2,000) and access to services like microloans, life insurance, prepaid utilities, telecommunications products, and other offerings typically not available to the unbanked. As of 6/30/2018, there were ~2.9 million EPE account holders.

In addition to its core South African business, our investment in UEPS is reinforced by the company’s balance sheet and ownership of KSNET Inc., one of the largest South Korean payment companies.  The combined value of those balance sheet investments and KSNET, even without the core business, is above UEPS’ current stock price.  Once the company proves its South African business can thrive despite the SASSA contract expiring, we are confident that the market will recognize the value in UEPS.

While we are not pleased with the short-term performance of the Fund, we believe our conservative positioning will lead to our goal of significant outperformance when the cycle turns and the longest running bull market in history inevitably comes to a conclusion.  Thank you for your investment.