After a tumultuous fourth quarter last year, markets shrugged off the short-lived period of volatility and rallied for the first three months of 2019.  Rising rates, decreasing profitability, and overleveraged balance sheets were worries of the past as corporate bond investors reached for yield and pushed risk-on assets back to peak price levels.  High yield bonds outperformed Treasuries by one of the widest margins for a first quarter in the last two decades, bolstered by the lowest rung of the credit quality ladder. 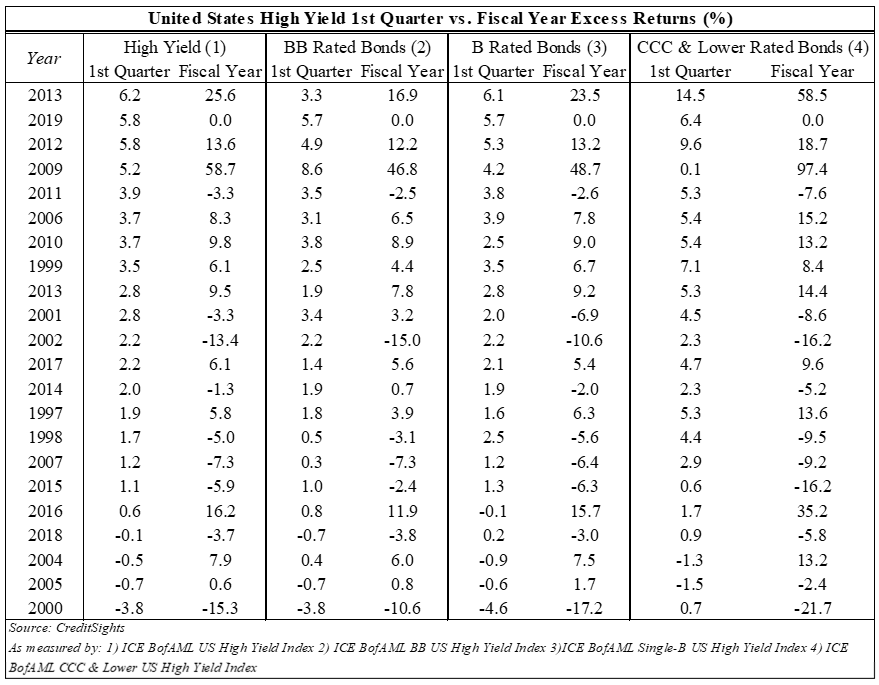 At the beginning of the year, Federal Funds futures implied there was a 13% chance of a rate hike, a 3% chance of a rate cut, and an 84% chance of no rate change at the September FOMC meeting.  By the end of the first quarter, the same methodology implied a 0% chance of a rate hike, a 45% chance that rates are cut, and a 55% chance that rates stay the same.  We believe that interest rate expectations, more than any other variable, were what drove this quarter’s returns.  As long as rates remain low, investors will hunt for an adequate yield in parts of the market they otherwise wouldn’t.  Additionally, with rates low, companies with onerous debt loads can raise or refinance debt at a lower cost of interest, often kicking debt repayment further down the road and adding more leverage to heavily encumbered balance sheets.

Last quarter saw one of the longest issuance droughts on record in the high-yield debt market.  Not a single deal priced in December 2018, the first time that has happened since November 2008.  That drought came to an end in the first quarter of this year, with 80 deals pricing for nearly $61 billion dollars.  Although the reopening of the debt window is a natural consequence of the Fed’s dovish commentary, we were surprised by some of the types of deals that have been getting done.

Debt investors are universally weary of private equity sponsors.  PE firms take over companies in deals funded with debt and influence the companies’ decisions with the goal of reaping a gain from their equity in a subsequent buyout.  We have talked in previous letters about the trend towards covenant-lite credit agreements, which lack safeguards protecting lenders.  Around 89% of institutional loans issued last year by private equity-backed borrowers fall under this category.  We believe this is another consequence of low interest rates and yield-starved investors. 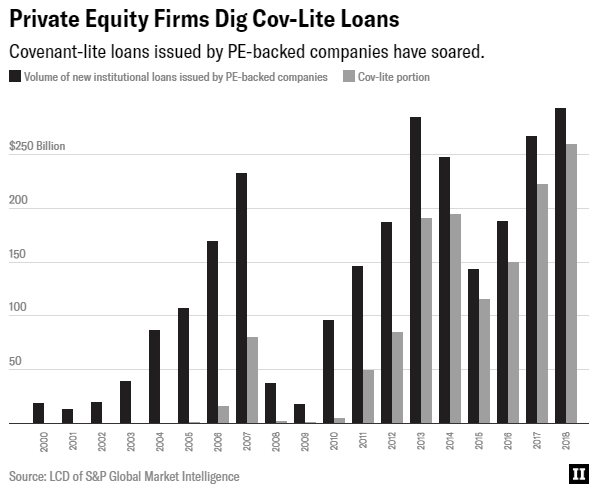 If credit markets continue to rip, these loans will likely continue to squeeze through.  The lack of covenants won’t begin to hurt investors until we go into a default cycle and investors start to worry about potential recoveries.  By then, it will be too late.

In a sign of the times, Sycamore, a private equity firm, is about to pull off a $5.4 billion refinancing of Staples, the once-popular office supply company and a former Intrepid equity holding.  As part of the refinancing, Sycamore will pay itself a $1 billion dividend.  Combined with another payment it took in January, Sycamore has recovered 80% of the equity it originally put up as part of the deal.  PE investors normally run companies for many years before taking profits or exiting.  Sycamore has managed to pull this off in just two.

We were interested to hear that investors were clamoring to get their hands on this deal and that the book for the new notes was oversubscribed.  Sycamore was involved in several retail bankruptcies over the past several years, including Aeropostale and Nine West.  Credit default swaps, essentially “insurance” on a company’s debt in the event they default, rose significantly for Staples following the deal.

The Sycamore dividend recapitalization at Staples is just one of many eyebrow-raising deals we’ve seen come to market over the past few months.  As investors continue to hunt for yield at the expense of covenant protections and cash flow support, our emphasis remains on finding reliable, creditworthy businesses to lend to at an acceptable rate of interest.  Our thoroughly researched holdings and low portfolio duration give us confidence we are well positioned for another shock to the credit markets.  In the meantime, we continue to find unique positions that have the potential to perform well in any market.

As we mentioned, corporate bonds saw gains across the board to start off the year.  The ICE BofAML High Yield Index (the “HY Index”) returned 7.40%, composed of a 5.70% increase in price and a 1.70% gain from interest income, in the quarter ended March 31, 2018.  The shorter-duration Bloomberg Barclays US Govt/Credit 1-5 Year Total Return USD Index (the “1-5 year TR Index”) gained 1.62%.  Longer-duration investment grade securities also outperformed, but to a lesser extent.  The Bloomberg Barclays US Aggregate Index (the “Barclays Aggregate Index”) returned 2.94% for the quarter and the ICE BofAML US Corporate Index (the “Corporate Index”) recorded a 5.01% gain over the same period.  The Intrepid Income Fund (the “Fund”) gained 2.36% in the quarter ended March 31, 2018.

Our performance in the first six months of the Fund’s fiscal year was also favorable.  The Income Fund returned 1.84% in the six-month period ended March 31, 2018, compared to a 2.39% gain for the HY Index and a 3.10% gain for the 1-5 year TR Index.  Investment grade bonds recorded better results for the period with the Barclays Aggregate Index gaining 4.63%, and the Corporate Index gaining 4.95%.

We are happy with our results over the past three and six months. The Fund’s effective duration remains below one and the majority of our holdings are rated investment grade as of quarter-end[1].  Our objective has always been on downside risk mitigation while still meaningfully participating in the upside.  We believe we are positioned well to continue doing that.

The Income Fund had four corporate bond positions that were called or matured in the first quarter.  We also rebalanced several positions.  The proceeds from the bonds that matured or were called were redeployed into short-term paper of investment grade issuers that we believe offer attractive yields in excess of government securities.  Additionally, we purchased bonds in four new companies – General Motors, Invista Finance, Nexteer Automotive Group, and LSC Communications.

General Motors Co. (“GM”) is one of the more conservatively positioned US automakers.  Compared to Ford, its closest comp, GM is less leveraged and its operations have been faring better.  The GM 8/07/2020 floating rate notes we purchased seem very defensible given the fact that the notes sit at the far less risky GM auto level (not GM financial). Additionally, GM is generating decent levels of cash, has $33.9 billion of untapped credit including a $4 billion 2021 revolver, and the company could pay for its debt obligations through 2020 with cash currently on hand.  We believe the debt was mispriced when we purchased it because of the negative sentiment around autos.

Invista Finance is a manufacturer of nylon, spandex, and polyester.  The company is owned by Koch Industries and is one of the key suppliers to Lululemon.  Invista has a pristine balance sheet with net cash and is growing on both the top and bottom line.  Additionally, Koch Industries is a smart operator with deep pockets and tends to run their portfolio companies conservatively and not lever them up.  We purchased the 4.25% secured notes due 10/15/2019, which come with an investment grade rating, at around par.

Nexteer Automotive Group is another automotive company whose debt we find attractive.  Nexteer produces automotive components, mainly steering and driveline systems.  The 5.875% unsecured notes due 11/15/2021 were yielding over 5% when we purchased them.  Nexteer has a balance sheet that boasts net cash and the company is producing copious amounts of free cash flow (over a 10% free cash flow yield over the trailing 12 months).  Its clients are some of the largest auto manufacturers in the world, and we believe the company can weather a downturn in the auto markets.  The company also has an investment grade rating.

Lastly, LSC Communications specializes in print and print-related services, as well as office products. It’s 3.3x levered and has produced a lot of free cash flow.  The company is being purchased by Quad/Graphics, Inc., which announced it will be taking out the existing LSC Communications debt.  The deal hasn’t been fully approved yet, but we believe it will get the necessary approvals by the end of the summer and that LSC’s 8.75% unsecured notes due 10/15/2023 will get a favorable call price or even a make-whole premium. Were that scenario to occur, the notes should generate a high-single-digit return or better.

Portfolio activity was otherwise subdued, but we are excited about the way we are currently positioned.  We continue to diligently search for attractive opportunities to take credit risk while limiting the Fund’s duration, which as of March 31st was 0.89.

[1] According to S&P’s rating of grade level BBB- or better.