The first quarter of 2019 began with the world’s largest company, Apple, cutting its outlook for the year.  It appeared as though we were set to see an extension of the volatility experienced in the fourth quarter and a further descent in the indices.  However, Federal Reserve Chairman Jerome Powell’s early January comments, which were reiterated throughout the quarter, were enough to calm fears that the Fed was raising interest rates too quickly.  The indices never looked back and rocketed to the best first quarter since 1998.[1]  Growth was once again favored over value, with some small cap growth indices outperforming small cap value by over 500 basis points in the quarter.

The Intrepid Disciplined Value Fund’s (the “Fund”) return of 5.97% fell well short of the S&P 500 Index and the S&P MidCap 400 Index for the quarter.  While this is an attractive absolute return for a quarter, we expected to do better.  We were hampered by higher than ideal cash levels in January, and frankly, many positions that inexplicably sat still as most stocks rallied.  Perhaps most frustrating were a few positions that performed very well before giving back most of their gains, and in one case it resulted in a nearly 150 basis point reversal in the Fund’s return. 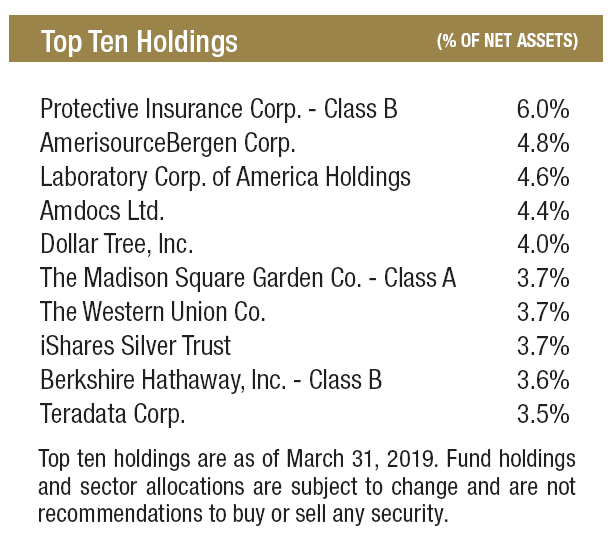 Vistra Energy was a subsidiary of TXU and was spun off in 2016.  It emerged from bankruptcy with little debt and is now the largest independent power producer in the country.  Vistra’s management team is top-notch in our opinion and has committed to maintain a strong balance sheet by remaining disciplined in its approach.  In what has historically been a volatile industry, the company is taking a different approach, having structured itself seeking to generate stable cash flows while taking little balance sheet risk.  Vistra generates copious free cash flow and has a high-teens yield at its current valuation.  The company recently announced a dividend and is also repurchasing shares.  For additional detail on Vistra, please see the Intrepid Capital Fund’s commentary.

Multi-Color Corp is a company we have followed for years as holders of its debt.  The label manufacturer has been around for over a century and produces a variety of labels for products like detergents, beverages, chewing gum, and liquid cleaners.  Its customers include large corporations like Proctor & Gamble and Miller Brewing.  We purchased shares shortly before it was announced that the company would be acquired by a private equity firm that owns a competitor.  The premium is not what we would have expected, but we do acknowledge that the company is facing some challenges that will take time to work through, so going private was the right move in our opinion.

Bonanza Creek Energy is a small cap E&P (Exploration & Production) with 67,000 net acres in Weld County, Colorado.  Similar to other Colorado-exposed producers, Bonanza trades at extremely depressed multiples primarily due to political risk as Colorado legislators work to implement regulatory changes.  We do not believe Bonanza will be materially affected by the proposed changes and anticipate the valuation to re-rate once everything is finalized.  As it stands now, Bonanza is in the unique position of having a very clean balance sheet with little debt that should support 20%+ production growth going forward.  Furthermore, the market is assigning little to no value to its midstream operations, despite the company having fetched bids for the asset in the past amounting to half of the company’s current market cap.

Take-Two Interactive Software develops and publishes video games.  It is the owner of some of the most popular and valuable franchises like Grand Theft Auto.  The group has come under pressure over the past year due to competition from a new entrant in the space.  We like the asset-light business and the fact that Take-Two has over $1.6 billion in cash on its balance sheet.  We believe the company’s earnings power is significantly higher and is being undervalued by investors.  In addition, the fact that its recurring revenue streams continue to grow should help margins improve.

We have written about Oaktree in the past and thought of it as a defensive investment.  We argued the distressed credit investment manager would be able to call (and begin charging fees) on committed capital that has been standing by idle whenever the credit markets experienced turmoil.  We will not have the opportunity to see that play out, as it was announced on March 13th that Brookfield Asset Management would be acquiring Oaktree.  The deal came at only a 12.4% premium and consisted of both a cash and stock component.  This was about 2% below where we had valued the shares.  The position was one of our largest weights, so we reduced it materially.

Labcorp was one of the largest detractors in the fourth quarter but was just the opposite in the first quarter.  We thought the shares had fallen too far as investors turned overly pessimistic on the company and its main competitor.  Not much has changed.  The equity’s strong performance likely had much to do with the overall market rally.

Shares of Skechers performed very well in the quarter after the company was rumored to be an acquisition target in January and then reported better than expected fourth quarter earnings in February.  We put little weight in the rumor but were pleased with the progress made with its margins following several quarters of domestic margin compression.  We believe the company is currently valued as if it will have little to no growth going forward, and that simply is not the case.  We look forward to the shares re-rating as the company executes on its plan.

Net 1 UEPS has been mentioned in a negative light in prior letters and this quarter is no different.  Management once again disappointed investors and lost what little credibility it had left when the company pre-announced more negative news in January.  We had continued to own UEPS due to the substantial discount that the equity traded relative to its net assets and the fact that it was still generating strong cash flow.  However, after reporting a large operating loss we felt misled by management and decided to exit the position completely.

Party City was a top contributor in the fourth quarter, but unfortunately, we did not take advantage of the strength to sell any of our position and it reversed course during the first quarter.  There is a worldwide shortage of helium that is resulting in elevated prices and is negatively impacting the company’s ability to keep the gas in stock.  We thought this issue would be resolved more quickly but it continues to linger.  Compounding matters, inventory was much too high exiting the fourth quarter which, given the very low rate of revenue growth, is concerning.  We still believe that shares are undervalued but question whether investors will look past the other issues or simply wait until the story becomes cleaner.

Amdocs is a company we have owned as a firm for many years.  We like its business as it is a steady grower with a history of stable cash flows.  However, the company came under attack in January when a well-known short seller published a report questioning the steady growth and alleging accounting irregularities among other things.  We acknowledge that some of the concerns raised were valid points, but we were satisfied with management’s explanations and continue to own the shares.

The final position we will discuss is Protective Insurance Corp (ticker: PTVCB).  It was the largest position in the Fund during the quarter, at nearly 7.5% of assets at its peak.  We wrote about Protective last quarter, summarizing the challenges the company faced and why we continued to own the shares.  We urged the Board to sell the company since the public markets were not giving it proper credit for its business, and it appeared as though a sale was in the works when it was reported in February that the company was in talks with multiple interested parties.  The shares shot up in value on the news to a level we thought was still a material discount to where a transaction would take place.  Unfortunately, another bad quarter which included an announcement that the dividend would be slashed sent the share price reeling once again.  While the equity remains at depressed valuations, we decided to trim our position in an effort to better manage risk given the illiquid nature of the investment and because it appears a sale is now off the table.

Hindsight is 20/20, making it easy to look back and question a few key decisions that had a material impact on performance.  We’d rather focus on the future and on how we can improve.  We are optimistic on the portfolio’s prospects and believe it is well-positioned to better capture market appreciation and defend against drawdowns.