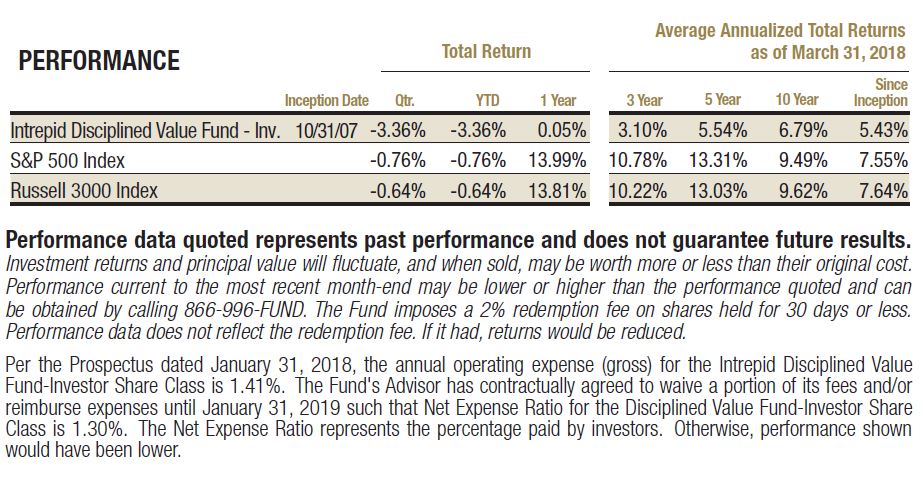 “Risk is what’s left over when you think you’ve thought of everything.”

The last quarter of 2017 and the first quarter of 2018 showed the side effects of a long, smooth bull market and a generous dose of investor greed and complacency.  Cryptocurrencies were ground zero – the price of Bitcoin soared from $1,000 at the beginning of the year to near $20,000 at the peak, and small companies with little or no connection to crypto could add “Blockchain” to their name and see their share price triple overnight.  The investor mania is perhaps less extreme or visible outside the crypto world, but still indicative of why we at Intrepid Capital think caution is in order.

The new year started with a roar – equity indices such as the S&P 500 Index were up 5% or better in the first three weeks of January.  That all started to change with both a sharp increase in rates on the 10-Year Treasury Note, along with a better employment number than the market expected (yes, apparently good news was bad news in this case).  Poof!  Quicker than you can say “abracadabra,” money in strategies devoted to selling volatility went to Never-Never Land.  This wealth destruction occurred literally overnight in several exchange-traded note (ETN) products.  The many speculators – and that is what they were, because merely hoping volatility stays low does not make one an investor – in these strategies, who had been patting themselves on the back for their phenomenal performance, had to learn the hard way that “easy” money is never really as easy as it seems.

As Paul Harvey used to say on his radio program, “And now for the rest of the story.”  The tough part is we don’t know the rest of the story yet.  Clients ask us all the time what we think the markets will do, but as the Danish proverb goes, “It is difficult to make predictions, especially about the future.”  If we had a crystal ball, we’d probably have more money to manage than we knew what to do with.

What we do know is that U.S. asset prices continue to be historically high by most measures.  Some, such as the cyclically adjusted P/E (CAPE) and unadjusted median P/E, are still at levels similar to the 2000 and 2007 peaks even after the minor market losses in February and March.  Greatly inflated prices by no means guarantee an immediate market crash, but they are highly correlated with disappointing results for investors over the next 5-10 years.  This principle is as true for rental houses and shopping centers as it is for stocks – low purchase prices generally result in high returns, and high purchase prices generally result in low returns.

Beyond the normal economic forces typical of an aging expansion, the market must contend with monetary policy as a headwind going forward as well.  Not only is the Federal Reserve steadily hiking rates now, with two more increases telegraphed for this year and three expected in 2019, but it also began slowly unwinding its balance sheet last November, the effects of which are just beginning to be felt in the Treasury market. 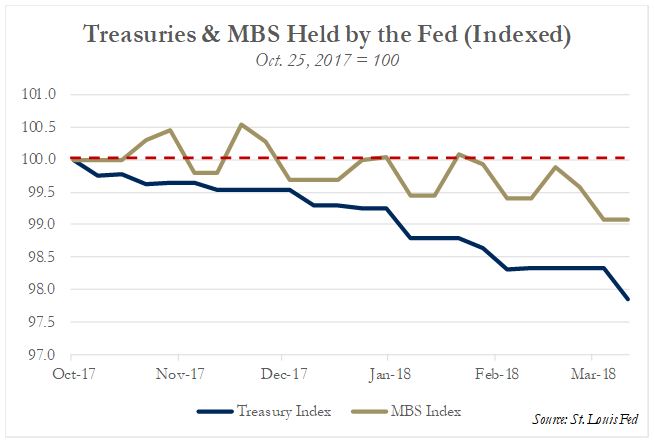 Since late 2014, the Fed has maintained a stable $2.5 trillion balance of Treasuries and $1.8 trillion of mortgage-backed securities acquired over the preceding five years of Quantitative Easing (QE).  The graph to the right shows the percentage change in both from November, when the Fed became a net seller, through the end of March.  So far, $69 billion of securities have matured without being reinvested.  The Fed has signaled its intent to accelerate the wind-down over the coming year.  Our contention is this:  If QE was explicitly designed to support asset prices, what does that imply now that we’re beginning “normalization,” or Quantitative Tightening?  Stay tuned.

We think the cyclical shift into ETFs and indexes since the financial crisis is likely to end in a trail of tears.  We will likely not be fully immune to a major market downturn, but rest assured that your team at Intrepid has done our best to construct portfolios of “all-weather tires” that can ride out the ups and downs of the market.  In the face of potential macro headwinds – inflation, interest rates, Fed tightening, trade war fears, high valuations – we continue our search for high-quality, temporarily mispriced businesses, wherever our analyst team can find them around the globe.

Speaking of global investments, the Intrepid Disciplined Value Fund (the “Fund”) has the flexibility to have 25% of its investments outside of the United States, which has proven advantageous as valuations in many parts of the world don’t look as painfully expensive as those in the U.S.  The largest contributor to the Fund for the quarter and fiscal half (the Fund’s fiscal year ends September 30) ending March 31, 2018 was Royal Mail (ticker: RMG LN), the recently privatized mail service in the United Kingdom.  Royal Mail’s share price has been pressured for most of the past year by uncertainty around negotiations with its labor union.  In late January, the stock rebounded more than 20% after the company announced favorable agreements with the union on its pension plan and several other important items.

The largest detractor for both the three- and six-month periods was Canadian media company Corus Entertainment (ticker: CJR/B CN), which has been struggling to grow its advertising revenue despite a merger with Shaw Media last year that made it the largest TV network owner in Canada.  After a string of disappointing quarterly results that undermined our confidence in management’s promises of growth, we exited our position in the first quarter.  For more context, I recommend reading the last several Endurance Fund commentaries, which lay out our thesis and follow the evolution our thinking on the company.  The other top detractors to the Fund for the half were Net 1 UEPS Technologies (ticker: UEPS), Oaktree Capital Group (ticker: OAK), Patterson-UTI Energy (ticker: PTEN), and (Dundee (ticker: DC/A CN).

While the results for the most recent period were disappointing to us and likely to you as shareholders, I would point out that the short-term underperformance was, in our view, due largely to unfortunate timing of company-specific issues in one or two holdings, rather than exposure to the broad market corrections we saw in February and March.  We will continue to search for solid companies that we believe are undervalued, with the goal of protecting your hard-earned capital and increasing your investment portfolio.