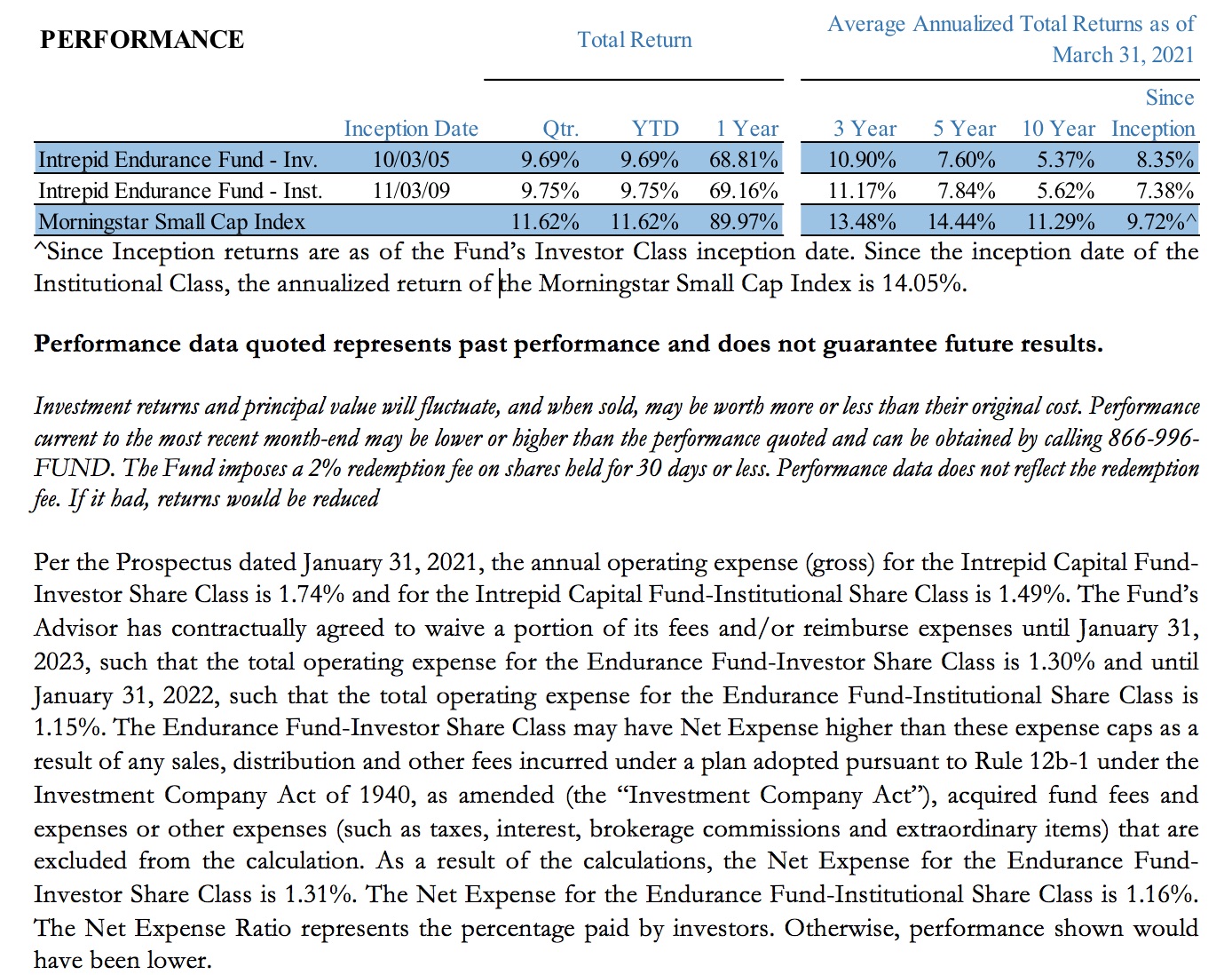 We’ll start off this letter the same way we started off the last one: wow, what a quarter! This quarter had it all: political volatility, crazy speculation (Gamestop, etc), violent factor rotations, and another round of stimulus. Behind these headlines, it appears the vaccine roll-out in the US is going very well…which is great news.

Boiling all of the above into a soup, small cap stocks continued their strong trend from last quarter. The broad Russell 2000 small cap index returned 12.69% in the quarter ended March 31, 2021. The Intrepid Endurance Fund (“the Fund”) returned 9.69% for the quarter, compared to 11.62% for our benchmark Morningstar Small Cap Index.  For the first half of the Fund’s fiscal year, the Fund returned 32.51%, compared to 44.32% for the benchmark Morningstar Small Cap Index.

Last quarter, we mentioned that the Fund would likely lag the small cap market if certain macro conditions emerged that benefitted specific types of investments, specifically “recovery plays,” small cap financials, and energy. Unfortunately, that discussion proved timely as expectations of a strong rebound in the US economy drove rising inflation concerns and interest rates, which favored all three of these categories.

Despite that, we remain steadfast in only allocating your capital into companies that show “enduring” traits and avoiding what we view as structurally challenged industries, such as those mentioned above. We believe that doing this continues to give you the best chance for long-term success, rather than trying to guess what macro conditions might occur and what sectors that might favor. With how difficult the future is to predict (see 2020), we think focusing on enduring businesses is the more prudent long-term strategy. 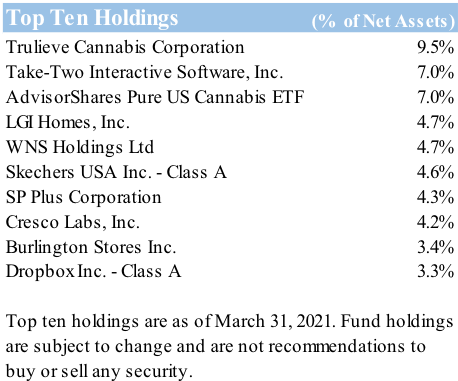 The good news is that the companies in the Portfolio are performing very well. As a group, we have been very pleased with their most recent operational execution and financial results. In addition, while finding new opportunities that are priced attractively is more difficult now than it was six months ago, we are still finding great small cap companies that have fallen through the cracks of the large run-up over the last six months.

The Fund had a moderate level of selling activity during the quarter.  We sold out of our positions in Amdocs (DOX), Charles River Labs (CRL), Copart (CPRT), Icon Plc (ICLR), Liberty Braves (BATRK), Ollies Bargain Outlets (OLLI), and Sykes Enterprises (SYKE) after these securities reached our estimates of intrinsic value.

The top contributors to performance for the quarter were Trulieve Cannabis Corp (TRUL CN), LGI Homes (LGIH), and Skechers USA (SKX).  Trulieve will be discussed in more detail later in the letter.  Homebuilder LGI reported blowout quarterly results to close out 2020 and has benefited from the remarkable strength of US housing demand.  Skechers stock steadily ground higher during the quarter as we think investors anticipated a pickup in retail activity as the economy re-opens.  We still believe each of these three positions are trading well below intrinsic value.

The top detractors to performance for the quarter were Take-Two Interactive Software (TTWO), IAA Inc (IAA), and a new position in Cresco Labs (CRLBF) which will be discussed later.  We think the reasons for the decline in TTWO and IAA are more related to changes in investors’ macro positioning rather than company-specific fundamental issues.  Take-Two and IAA each reported fine quarters but were victims of a rotation into “recovery plays.”

Finally, we purchased a couple of new positions in the cannabis industry – Cresco Labs (CRLBF) and an AdvisorShares Cannabis ETF (MSOS).  Following our initial investment in Trulieve (TRUL CN), we have spent the past few months doing extensive research into the US cannabis industry and believe the opportunity is unique and highly compelling.  Collectively, our exposure to this industry was 20.7% of the Fund as of quarter-end, which is approaching the maximum level we are willing to invest the Fund in one single sector.  We owe you an explanation, and will devote a large portion of this letter walking you through our thesis and why we believe the cannabis industry deserves such a large allocation.

We think the opportunity in the cannabis industry is one of the most unique and compelling opportunities that we have seen in our careers.  The combination of (a) growing public momentum behind cannabis, (b) regulations that create barriers to entry and scale, and (c) a large, existing illicit user base that is transitioning to the legal market has created a very attractive setup for an investment:

The supply side of the equation varies by state (regulation is effectively at the state level).  Our focus is on companies that operate in states which restrict the number of licenses awarded to cannabis companies, thereby limiting supply.  These states generally seek to tightly control the supply chain, but also want to prevent a flood of “weed shops” from entering their markets.  For example, consider the case of Virginia.  The state has awarded five regional licenses (essentially monopolies), which translates to a maximum capacity of just 30 retail dispensaries in a state with ~9 million people.  While this is somewhat of an extreme sample, the broader point remains that supply, in some states, is being artificially limited by government regulations.

What do you get when you mix booming demand with constrained supply?  Incredible economics!  The best operators in the industry are able to enjoy strong pricing power while continuing to scale their operations.  A perfect example of this is Trulieve, the Fund’s largest holding, whose dominance in the limited license state of Florida has led to operating metrics that are superior to some of the best retailers in the world.

Perhaps the most compelling part of our thesis is that US institutional investors are largely restricted from owning these stocks for the time being.  Because cannabis is still an illegal drug at the federal level, large banking institutions cannot do business with cannabis companies.  As a result, these stocks do not trade on US exchanges and cannot be custodied by some of the largest custodians.  Instead, they trade on less liquid Canadian exchanges and have a large retail shareholder base.  In our view, this is the main reason why these stocks trade at large discounts to our estimates of their value despite such attractive characteristics.

Fortunately, we expect upcoming changes in federal regulations which will benefit the cannabis industry.  Public momentum is on their side, as over two-thirds of Americans believe marijuana should be legal (up from about 33% in 2000).  One such proposal is the SAFE Banking Act which was recently introduced in Congress and would lift the restrictions on banks to do business with cannabis companies.  Most experts we have spoken to expect SAFE (or some other piece of related legislation) to pass within the next year, which would allow these stocks to be listed on US exchanges and owned by institutional shareholders.  We believe this will be a significant catalyst to drive flows into these stocks and push prices up closer to intrinsic value.

Then there is the prospect of federal legalization or decriminalization of cannabis, which is probably the most notable piece of legislation that would impact the industry.  There is still some uncertainty about how this could take effect, but it is likely an inevitability that there will eventually be some sort of broad legalization.  On the one hand, this could allow more traditional supply/demand dynamics to take hold, which would impair the pricing power that certain companies currently enjoy.  On the other hand, it would massively increase the addressable market by unlocking a large swath of demand.  In the meantime, however, we expect the best operators to continue to earn large excess profits and build economic moats.  We believe the current market valuations of these operators are significantly undervalued regardless of how potential regulatory changes play out.

We currently have positions in three cannabis-related securities – Trulieve, Cresco Labs and a cannabis ETF.  Trulieve has a dominant position in the highly attractive Florida market and is the most profitable large cannabis business in the US.  Cresco is the largest wholesaler in the industry and places a smaller emphasis on retail.  They have strategically positioned themselves to benefit from the industry becoming more like a traditional CPG category over time.  Finally, the AdvisorShares cannabis ETF owns a number of different companies in the cannabis industry.  While we have our views on which companies are best positioned currently, we also acknowledge that there is still a lot of uncertainty as to how the cannabis industry will evolve over time.  Because we think prices are broadly attractive across the industry, we think owning a basket of companies via an ETF is an effective way to diversify our investment outside of Trulieve and Cresco Labs. As our view on the future becomes clearer, we plan to allocate the ETF position into specific operating companies.

In closing, we remain highly optimistic about the positioning of the Portfolio.  We ended the quarter with a cash level of 6%, which is materially consistent with the prior quarter but lower than what it has been over much of the last decade.  While this will likely result in more volatility than what the Fund has historically experienced, we expect this positioning – in great companies at attractive prices – will better protect and grow your capital over time.

Mutual fund investing involves risk. Principal loss is possible. The Fund is subject to special risks including volatility due to investments in smaller companies, which involve additional risks such as limited liquidity and greater volatility. The Fund may invest in foreign securities which involve greater volatility and political, economic and currency risks and differences in accounting methods. The risks of owning ETFs generally reflect the risks of owning the underlying securities they are designed to track. ETFs also have management fees that increase their costs versus the costs of owning the underlying securities directly.

Prior to June 26, 2015, the Fund was named the Intrepid Small Cap Fund. Earnings growth is not representative of the Fund’s future performance. The Morningstar Small Cap Index tracks the performance of U.S. small-cap stocks that fall between 90th and 97th percentile in market capitalization of the investable universe. The Russell 2000 Index consists of the smallest 2,000 companies in a group of 3,000 U.S. companies in the Russell 3000 Index, as ranked by market capitalization. You cannot invest directly in an index. Return on invested capital (ROIC) is a calculation used to assess a company’s efficiency at allocating the capital under its control to profitable investments. Free cash flow represents the cash a company generates after accounting for cash outflows to support operations and maintain its capital assets. Opinions expressed are subject to change, are not guaranteed and should not be considered investment advice or recommendations to buy or sell any security. The Intrepid Capital Funds are distributed by Quasar Distributors, LLC.