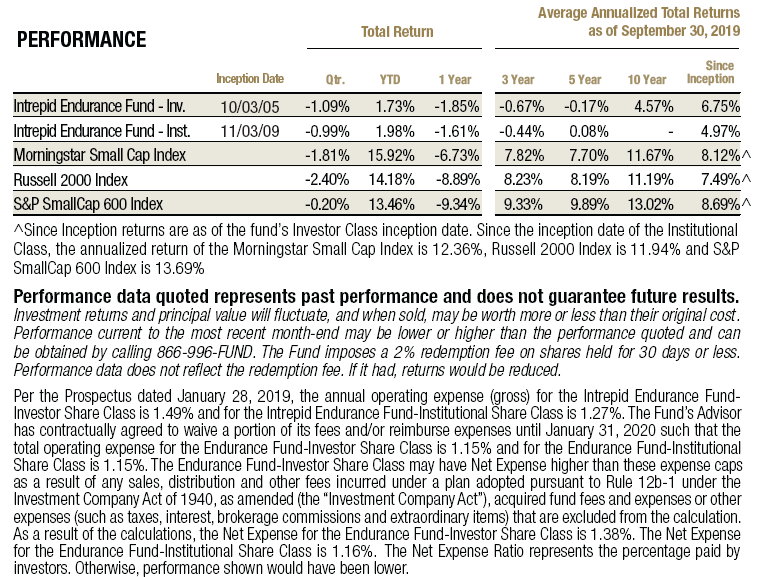 These past three months (calendar Q3 2019) represented the fourth quarter of the Endurance Fund’s (“the Fund”) fiscal year. Like last quarter, it was a period heavy on news flow, with trade wars, geopolitical tensions, swings in interest rate expectations, and political uncertainty whipping market sentiment in many directions over very short periods.

Also, like last quarter, there was some meaningful volatility in the middle of the period, with the Russell 2000 index falling 7.44% from peak to trough during the first four weeks of August.

We reacted to that volatility a bit differently this quarter than last.  Instead of adding a number of new positions, we found it more opportune to take advantage of the volatility by purchasing more shares of our existing holdings.  This allowed us to increase the position size in certain high conviction holdings at attractive prices.

In fact, after the “buying spree” over the previous nine months in which we added 16 new positions to the Fund, we only added two small new holdings during calendar Q3 (fiscal Q4).  Along with the aforementioned additions to existing positions, cash levels ended the quarter relatively unchanged from the previous quarter at 44.5%. 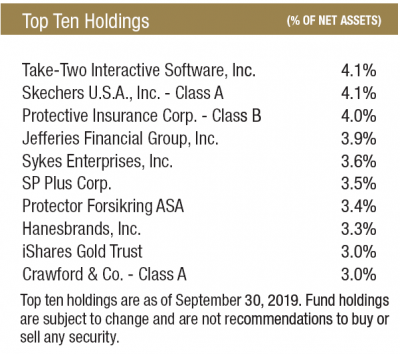 The new holdings in calendar Q3 2019 were Manchester United PLC- Class A (ticker: MANU) and Liberty Braves – Class C (ticker: BATRK).  European soccer giant Manchester United is one of the most valuable sports franchises and brands in the world.  Management has had a tough time putting a winning team on the field over the last few years and has been hampered by a weak British currency and a disappointing domestic television rights package.  Over the long-term, however, the company has a great track record of growing and monetizing the brand through the team’s unique worldwide appeal.  By contrast, the Liberty Braves, the owner of the Atlanta Braves professional baseball franchise, has made the playoffs for the past two seasons.  Liberty is also developing a large real estate project around the new Braves stadium that has seen very successful occupancy and income gains to date.

In past letters, we have discussed how the change in the Fund’s cash levels is not formulaic but is driven by the opportunity set of quality small cap stocks selling at attractive valuations at any given time.  We believe this quarter’s slowdown in i) new stock purchases and ii) the trajectory of lowering cash levels relative to the last three quarters is a good reflection of this discipline. 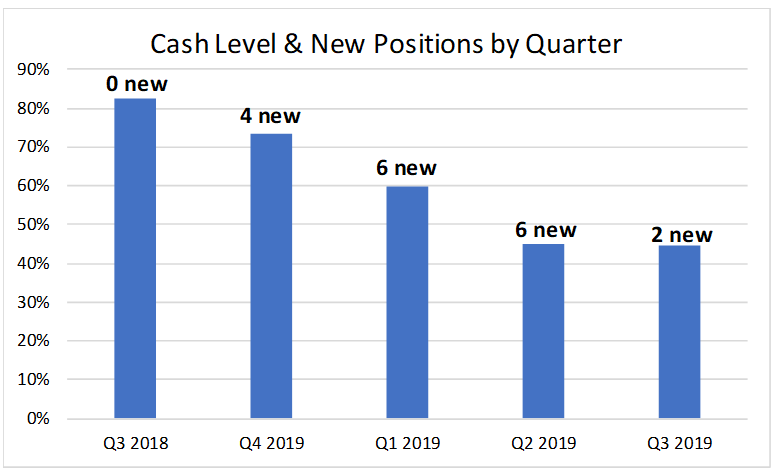 We would also like to explain the Fund’s position in cash, which – at 44.5% – is a frequent source of investor questions.  Importantly, the Fund is an absolute return-oriented strategy.  This means we will not purchase a stock unless it is trading below our estimate of intrinsic value and we believe offers an expected return which appropriately compensates owners for its risk.  When we are unable to find stocks meeting these criteria, we hold cash.  With many of our favorite valuation metrics pointing to a broadly overvalued market in an economy that we believe looks increasingly likely to be late cycle, we find ourselves holding a significant amount of cash.  By contrast, most managers are forced to evaluate stocks relative to a benchmark and have mandates requiring them to own stocks even if the manager believes they or the market are overvalued.

We believe absolute return strategies are far more sensible for most investors than simply aiming to outperform an index.  To illustrate, consider a story from the Wall Street Journal in July which reported that several European junk bonds were trading at a negative yield.  In other words, investors who purchased these bonds and held them to maturity would guarantee themselves a loss on the investment, before even considering any credit risk.  As absurd as this may sound, the article goes on to quote the chief investment officer at a global asset manager as saying that such an investment is “not completely crazy” because “…for some investors, there is an acceptance that it’s not about absolute returns, but relative returns.”  The implication here is that even negative returns are okay as long as they’re less negative than peer or benchmark returns.  Rest assured that we strongly disagree with this line of thinking!

Finally, one last thing to discuss relative to last quarter is our discussion of growth vs. value relative performance.  Last quarter, we lamented the underperformance of value (particularly small value) over the last four years, but we emphasized our belief (based on history) that this would not and could not last forever.  Fortunately, late in this most recent quarter, those growth versus value trends reversed a bit, providing a nice tailwind for the Fund’s performance in September.  While it’s impossible to predict what will happen next for growth and value, we were encouraged by the Fund’s performance during the abrupt (and hopefully not short-lived!) change.

In the third calendar quarter of 2019 (the fourth quarter for the Fund’s fiscal year 2019), the Fund returned -1.09% compared to -1.81% for the benchmark Morningstar Small Cap Index.

The outperformance for the most recent quarter was mostly due to the Fund’s higher cash level compared to the benchmark. For the full fiscal year, the relative outperformance was also driven primarily by the Fund’s cash holdings in what was a challenging and volatile period for small cap stocks. However, stock selection was also a positive contributor to relative performance.

Our top three contributors to performance during the quarter were:

The top three detractors to performance during the quarter were:

The top three contributors to the Fund’s performance for the fiscal year were Skechers (ticker: SKX), Hallmark Financial (ticker: HALL), and Take Two Interactive Software (ticker: TTWO).  The top detractors for the fiscal year were Net 1 UEPS Technologies (ticker: UEPS), Garrett Motion (ticker: GTX), and Greensky (ticker: GSKY).  Each of these top contributors or detractors have been discussed in prior quarterly commentaries, with the exception of Take Two.  Since purchasing TTWO stock in May, the company has reported solid results and the stock has climbed steadily.  Sales of the video game publisher’s legacy titles (NBA 2k, Grand Theft Auto, Borderlands, etc.) have bested consensus estimates and management has raised its outlook for future performance.  We think TTWO is a great business that will continue to benefit from the secular growth of the gaming industry.

We continue to judge ourselves by the framework we laid out in past commentaries:

i) Avoiding large drawdowns on your capital – The Fund clearly performed well on this objective, highlighted by substantial outperformance during the first fiscal quarter of 2019 (calendar Q4 2018) when the Fund returned -3.52% versus the Morningstar Benchmark Small Cap Index return of -19.54%. The Fund also outperformed in May and August of 2019 when volatility briefly re-emerged.

ii) Taking advantage during periods of volatility – The Fund used these bouts of volatility to transform its positioning, increasing its equity exposure by over 3x and reducing cash levels from 82.5% to 44.5% as prices for high-quality small cap stocks increasingly reflected more attractive risk/return profiles.

iii) Generate attractive positive absolute returns – Despite outperforming the small cap indexes over the Fund’s fiscal year, we are disappointed to deliver a slightly negative absolute return.  It’s worth pointing out, though, that nearly two thirds of stocks in the Russell 2000 had a loss over this period,[1] indicating the breadth of the selloff.  Our core small cap value universe also experienced significant headwinds, which we discussed in a previous letter.

However, we believe we were able to manage those headwinds well and even exploit the underperformance of small cap value to introduce 18 new positions over the past twelve months – driving up the percentage of the Fund invested in equities from 17.5% at the end of Q3 2018 to 55.5% today.

As a result, the Fund looks quite different than a year ago, but these changes were made in a manner consistent with achieving our objectives above.

We also believe the current positioning bodes well for future performance.  With over three times as much exposure to small cap stocks, the potential return profile of the Fund is much higher than a year ago.  And with 44.5% of the Fund still held in cash, we also have a very flexible and opportunistic positioning should volatility continue within our high-quality small cap stock universe.

We hope to have the opportunity to continue to exploit this positioning and stand ready to do so. Our track record over the past year of deploying significant capital quickly – and in a disciplined manner – stands as a testament to this ability.

As part of that activity, we deliberately avoided some of the most high-flying small cap growth and technology stocks due to obvious concerns about profitability and valuation.  Late in the quarter, coinciding somewhat with the value/growth rotation mentioned above, these stocks experienced extreme volatility – with some down 30-50% in short order.  This change in sentiment was perhaps most evident in the initial public offering market, where front-page stories appeared almost daily during September about how popular but unprofitable recent IPOs were hitting new lows,  including Uber (ticker: UBER), Lyft (ticker: LYFT), SmileDirectClub (ticker: SDC), Chewy (ticker: CHWY), Slack (ticker: WORK)[2], and Farfetch (ticker: FTCH), or getting cancelled altogether (WeWork).

Our primary focus is always on capital preservation.  Our three goals highlighted above are designed to create guardrails to take risk with your capital when you are adequately compensated, and avoid risk when you are not.

As a result, you can be confident that any future declines in cash levels will be based on the opportunity to allocate that cash in a manner that we believe can generate attractive risk-adjusted returns on your capital, and not a pre-determined path to get more invested or blindly chase the best-performing sectors.

In summary, we will continue to manage the Fund in a very flexible and opportunistic – yet disciplined – manner.

[1] Excludes Russell 2000 constituents with less than one year of trading history
[2] Slack was a direct listing, and while not technically an IPO, first began trading publicly in June 2019