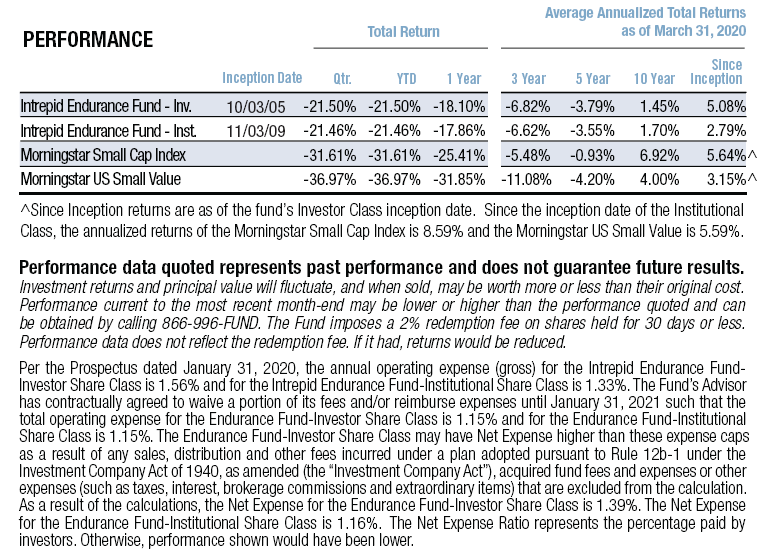 As I sit down to write this letter, the governor of Florida just issued a stay-at-home order for residents.  Just a few weeks ago, it would have been unthinkable to see sights of empty beaches and theme parks on a sunny Saturday afternoon in the spring.  Indeed, similar scenes are playing out nationwide as the country adjusts to a strange period of isolation.  We hope that you and your families remain healthy throughout this challenging time.

Financial markets pivoted perhaps just as hard as everyday life during the quarter.  Investors entered the year cheering on the longest ever bull market expansion with bold predictions of ever-higher stock prices, valuations be damned.  Since there was no clearly identifiable catalyst for a recession, why wouldn’t stocks continue to grind higher?  However, after the full potential impacts of the coronavirus came more clearly into focus, stocks suffered the fastest drawdown in history.  We find it interesting that most market participants seem to believe they will spot the signs of a bear market before others, and safely head for the exits before them.  In our view, it is precisely this collective confidence that helps fuel bull markets on the way up and produce violent selloffs on the way down.  The coronavirus, like the catalysts of other bear markets before, did not exactly repair the herd’s reputation of predicting recessions and smoothly heading for the exits. 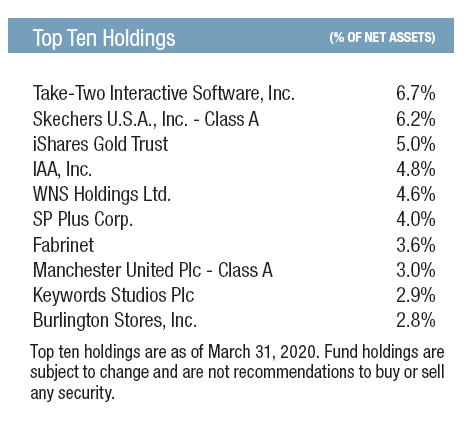 As we have discussed in countless letters before this, it has been our opinion that stocks have been broadly overvalued, over leveraged, and did not compensate investors well for bearing the risk of ownership. The Endurance Fund (the “Fund”) had a 39% position in cash & treasuries coming into the year and a 34% position immediately prior to the significant sell-off which began on February 20th.  In that respect, the Fund was positioned relatively well for the 41% plunge in the Russell 2000 over the next eighteen days.  We should emphasize here that this defensive positioning was due to the valuations of the stocks in our opportunity set rather than predicting how the events of the virus might unfold.  Like many other investors, we closely followed news related to the virus, but could not reasonably anticipate the economic shutdown and related damage it could create until prices had already begun to reflect this risk.

The historic selloff and related volatility created some great opportunities to deploy much of the Fund’s war chest of cash & treasuries.  True to its name, the Fund is designed to “endure” by remaining flexible and holding cash when valuations are not attractive and then allocating this cash into businesses that can “endure” in any environment.   Over the duration of the quarter, approximately 19% of the 39% position in cash was invested, or about half.  Our approach to investing in this crisis was not to dive directly into the “middle of the storm,” but rather to scrape along the edges for higher quality businesses caught up in the selloff.  By this we mean, we did not concentrate our efforts at investing in hotels, cruise lines and restaurants that bore the brunt of the carnage.  Many of these businesses were highly leveraged and may depend on government bailouts for survival.  Instead, we focused on identifying stocks of good businesses selling off due to temporary setbacks, but whose long-term value we believed was intact.

From a trading perspective, the Fund was the most active it has been in many years.  We increased our position sizes of several existing names and purchased new positions in several others.  As discussed before, our additions tended to be businesses with strong cash flows, good balance sheets and ample liquidity to “endure” through this period.  Rather than provide a detailed description of each, we think it would be helpful to highlight a few areas where we concentrated a meaningful portion of our activity:

To summarize, we found a good deal of opportunity as stock prices went into free-fall in some high quality, market-leading businesses within already attractive industries. Like all businesses, we expect their operations to take a hit with the sharp slowdown to come near-term in the economy. But in many cases, we expect the companies we purchased within these categories to come out in an even stronger competitive position than they went into this crisis.

While most of the additions to the Fund fit into the categories above, there were a few exceptions that the Fund purchased which we will briefly highlight:

Despite all this buying activity, it’s worth mentioning that the Fund still has a bullet in the chamber, so to speak, in the remaining 20.2% position in cash.  Despite a historic crash in prices, we still do not believe small cap stocks are screaming bargains – a testament to how stretched we think valuations had gotten before the selloff.  Proclaiming that we are in a recession right now is not controversial.  More debatable, however, is how long this period will last.  Will it be a V-shaped recovery that snaps back when the economy is re-opened?  Or will this be a more drawn out period of weakness?  While we obviously don’t know for certain, we would argue the odds of the latter scenario have increased meaningfully – there is simply a tremendous amount of debt for the economy to deal with as it processes this exogenous blow.  In our opinion, there are still many stocks that are not adequately pricing in this risk.  There are a number of high-quality stocks in our “on-deck” circle, but we are still waiting for more attractive entry prices.  To play off an old Warren Buffett-ism, we are still picking up falling stocks with a thimble and have not yet reached for the bucket.

For the quarter ended March 31, 2020, the Endurance Fund returned -21.50%.  As absolute return-oriented investors, we are frustrated to have lost money during the quarter.  Unfortunately, there were few places to hide amidst the selloff and the stocks that the Fund owned were not immune from the selling pressure.  While it pains us to have to report that your capital suffered a loss, we think it’s recoverable.  Swings in prices are a reality of investing in the stock market, but we are confident in the long-term intrinsic values of the businesses that the Fund holds.  We also view the selloff as an opportunity to deploy more of the Fund’s cash and position itself to capture more upside when prices recover.

The Fund’s return was more palatable compared to the -31.61% return of the Morningstar Small Cap Index benchmark.  And better still when compared to value-oriented small cap indices, such as the Morningstar US Small Value Fund category which fell 36.97%.  It was yet another period in which small value indexes lagged those of larger and more growth-oriented companies.  If the last two recessions are a guide, then we might expect to see a sharper recovery from small caps coming out of this bear market than large caps.  The Russell 2000 suffered a larger drawdown than the S&P 500, Dow Jones Industrial and Nasdaq averages during the financial crisis, but recovered to its prior peak faster than the S&P and Dow (the Nasdaq recovered equally quickly).  In the recovery following the bust of the tech bubble in the early 2000s, the Russell 2000 also led the recovery.

The top three contributors to performance were:

The top three detractors to performance were:

The Fund sold out of six positions during the quarter:

For the first six months of the Fund’s fiscal year, the Fund returned -17.80% vs. -25.68% for the benchmark Morningstar Small Cap Index. The Fund underperformed during the period of low volatility through mid-February, but then meaningfully outperformed when volatility spiked and panic ensued later in the period.

Despite the carnage in the markets, the current investing landscape is a more favorable environment for the Fund’s strategy than we have seen in years.  Prices are cheaper, bargains are far more plentiful, and the extreme volatility has created attractive opportunities.  The Fund is now positioned for much more upside should stocks rally higher and stands ready to deploy the remainder of its cash should volatility continue.  This valuation driven approach has served well in periods such as this, and we are working diligently to assess the best opportunities in which to invest your capital for attractive long-term appreciation.

In closing, we want to express our sincere appreciation for the patience of the long-term shareholders of the Fund.  Its positioning has been unconventional, leading to lackluster returns during the later stages of this record long bull market.  We are hopeful that the current environment – with far lower prices and heightened volatility – will allow us to position the portfolio for much more desirable results looking forward.  Thank you for your investment.