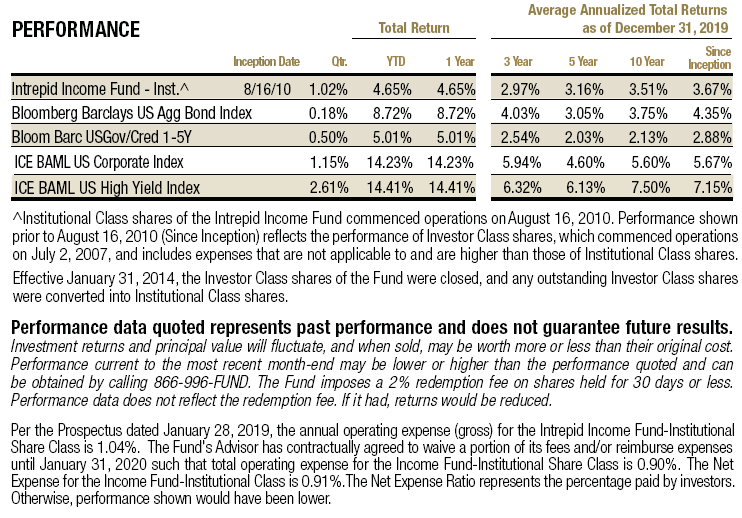 The market has a short memory.  This time last year, we wrote about an inverted yield curve, a high yield bond issuance drought and how volatile things seemed heading into the 11th year since the global financial crisis.  Few predicted that these ingredients would be the recipe for double digit returns in both high yield and investment grade bonds in 2019.  Yet here we are, with spreads on corporate debt near record lows to herald in the new decade, and many bonds carrying more turns of leverage than percentage points of yield.

That is not to say volatility has been completely absent.  There have been several swings in cyclical expectations this year, with the yield curve inverting again earlier in the year only to snap right back on interest rate cuts and optimism around a trade deal with China.  The Fed’s unusual decision to ease rates this year despite the backdrop of tightening spreads and equities rallying to all-time highs drove dollar prices on bonds higher and led to a lot of callable debt being retired early.  Last year’s fears around the ability for highly leveraged companies to refinance their debt were quickly forgotten as over $300 billion of new high yield issuance flooded the market in 2019, up 57% from the previous year according to CreditSights. 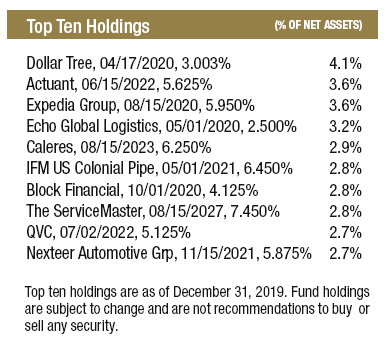 We cannot predict when or how this market bonanza fueled by cheap debt and monetary stimulus will end.  Our past several commentaries have laid out what we view as some of the biggest risks in today’s credit markets, whether it is a lack of liquidity, loose covenants, unstable repo markets, or just too much leverage.  We are still wary of these risks.

On the other hand, few economists are predicting an imminent recession and desperate, yield seeking behavior is still pervasive.  CCC bonds, the riskiest of performing high yield debt, had a strong rally to end 2019 with spreads tightening to below 1,000 bps for the first time in more than three years.  If complacency continues to embolden yield starved investors, we could see this lower-tier debt tighten even further, which could drive big returns for the entire high yield asset class.

This behavior reminds us of the party game Hot Potato, where players in a circle toss around a potato while music plays.  The player holding the potato when the song stops is eliminated from the game and the last person standing wins.  We fear many fixed income investors are not lending money to risky, poorly rated companies because there is a fundamental investment case for the business to turn around its operations.  Rather, these investors are playing a game of Hot Potato, hoping the credit jukebox continues to blare music on the Fed’s nickel.  In this game, investors are no longer focused on how a company can pay down debt on its own merit, but rather how crafty bankers might maneuver a refinancing and convince more people to play the game.  As long as there is someone to throw the potato to before the music stops, elimination can be avoided. A rolling loan gathers no loss.

We watch other investors play this game of Hot Potato with a jaundiced eye.  Whether the power goes out or the Fed just runs out of nickels, sooner or later the music always stops, and someone is left holding the potato.

Credit markets had another positive quarter to end 2019, despite some noisy headlines.  In October, WeWork withdrew its planned IPO and its unsecured notes due in 2025 tumbled from above par to nearly 70 cents on the dollar before recovering a bit.  This felt to us like a long overdue return to sanity for such a risky bond, although we can think of several other cash-incinerating, high yield issuers whose bonds are also due for a price correction.

The Bloomberg Barclays U.S. Gov/Credit 1-5Y TR Index returned 0.50% in the fourth quarter.  Given the Intrepid Income Fund’s (the “Fund”) shorter duration and higher quality biases, we believe this index is an appropriate benchmark.  Investment grade corporate bonds returned 1.15% for the quarter, as measured by the ICE BAML US Corporate Index.  The lower quality ICE BAML US High Yield Index saw an increase of 2.61%.

The Income Fund returned 1.02% in the fourth quarter.  We continued to look for short-term, credit-worthy bonds that we believe will produce attractive risk-adjusted returns relative to Treasury bills.    We have recently balanced our defensive posture with opportunistic purchases of bonds that we believe will help us participate in any upside left in this aging cycle.  That is not to say we have changed anything about our meticulous investment process or the high standards that must be met for any potential holding.  We are very excited about the way we are positioned heading into 2020.

Cincinnati Bell is a wireline operator in Ohio and Hawaii with bonds that offer compelling yield and robust asset coverage.  The company has “future-proof” fiber assets that positioned them well to offset declines from legacy copper assets and potentially benefit from 5G once it becomes a reality. We purchased two separate Cincinnati Bell debt issues – the 6.3% secured notes due in 2028 and the 8% unsecured notes due in 2025.  We initially purchased the longer-dated secured notes because we liked the fiber assets that secured the notes and felt like even in a worst-case scenario, we would get very close to our principal back.  After doing more work on the credit and speaking with the company about their path to organically deleverage their balance sheet, we also purchased the unsecured notes because we believed the 10% yield at the time more than compensated us for the risk.  Shortly after purchasing the unsecured debt, Brookfield Infrastructure Partners announced they were acquiring Cincinnati Bell which significantly pushed the prices up of the two debt issues we own.  We continue to hold both issues as we believe the yield is still compelling and there is a good chance one or two of the issues will be called once the deal is completed.

Although we had a few other bond positions trade up nicely, the bulk of the Fund’s returns for the quarter came from interest payments on our existing positions. We had two bonds mature, five bonds get called, and made seven new purchases during the quarter.

The state of liquidity in the fixed income markets has bolstered our view that there is a vital need for active management.  Although we saw nothing like the forced selling of December 2018, we have recently observed momentary “flash crashes” in specific securities that we believe were caused by a severe lack of liquidity.  In fact, according to a Wall Street Journal Article[1], the dips in the high yield market were even more extreme this past autumn than in December 2018 when volatility was rampant. We envision a scenario where passive funds and ETFs could be forced to sell bonds at fire sale prices next time there is widespread panic and money managers hit the eject button.  As we have said before, we will happily purchase some of these securities when they are being offered at clearance-level prices.

We remain vigilant in a world of mass uncertainty and overwhelming complacency.  As prices gyrate and our short-term maturities come due, we will reassess the risk/reward opportunities that the market is offering and selectively move into higher-risk debt securities when it makes sense.  As always, our top priority is generating stable, reliable income and avoiding any situations that put your hard-earned principal at risk.  We will continue to follow a disciplined process to find attractive investments and be exceptionally discerning when lending businesses money.  Thank you for your investment.