Stock and bond markets bounced back sharply in early 2019 after demonstrating broad and severe volatility late in 2018. The Morningstar Small Cap Index returned an impressive 15.50% in the first three months of 2019.

The Endurance Fund’s (the “Fund”) results were not as impressive, returning 2.10% during this period. The Fund’s large Treasuries position and focus on stocks with stable fundamentals and operating profiles drove a high degree of underperformance in a “risk-on” market with little downside volatility.

However, these same characteristics and positioning drove significant outperformance for the Fund during the last three months of 2018.  As a reminder, the Fund returned -3.52% in calendar Q4 2018 versus the Morningstar Small Cap Index’s -19.54%. When linking these two quarters, which encapsulate the Fund’s first half of fiscal 2019, the Fund outperformed by returning -1.49% versus -7.06% for the Morningstar Small Cap Index.

The Fund’s strategy is designed around three objectives: i) to generate positive absolute returns; ii) avoid large drawdowns of capital; and iii) take advantage during periods of volatility.  These three objectives combine to create guardrails that encourage us to take risks with your capital when it is attractively priced, avoid risk with your capital when expected returns are inadequate, and – in doing so – compound your capital in a manner that over-compensates you for the amount of risk you took by participating in the stock market.

We think the last six months provide a unique opportunity over which to judge the Fund on these objectives, as it included both the wild panic and euphoria reminiscent of a full market cycle – in only a fraction of the time frame.

Over this period, our disciplined absolute return focus clearly added value above the index, primarily by avoiding large drawdowns on your capital.  However, due to the lackluster upside we demonstrated during calendar Q1, we did fall short of our objective of generating positive absolute returns during the full six-month period.  While small cap indices fell much more than the Fund, we are not satisfied with outperformance when it includes a slightly negative absolute return, even over a short “mini” market cycle.

Finally, it’s important to assess what actions we took to exploit the recent volatility in order to achieve the Fund’s objectives moving forward.

You may remember that the Fund was extremely active (relative to its recent history) in the fourth quarter of 2018 as markets buckled and went into freefall. In that short time frame, we added four new positions in high-quality small cap companies with pristine balance sheets. Despite the rally in small cap prices to date in 2019, we were able to continue to find attractively priced opportunities – primarily by pivoting our focus throughout our opportunity set to companies with a bit more financial leverage. In fact, four of the six new positions established in Q1 2019 possess meaningful debt on their balance sheet.

This flexible approach allowed us to benefit by avoiding companies with a higher degree of financial risk when they were not priced as such, but then swoop in and selectively take on this risk as interest rates rose, credit spreads widened, and high yield issuance closed late in 2018 – punishing stocks with any sort of leverage concern. Of note, we remained disciplined when sourcing these opportunities with higher debt levels, requiring higher absolute returns on equity and a stable operating profile combined with ample asset coverage or extended debt maturities.

Essentially, we quickly shifted our focus in early Q1 2019 from avoiding financial risk to looking for opportunities to take it on in an acceptable manner.  Later in the quarter, we again utilized our flexible, opportunistic mandate to purchase a well-run, conservatively-financed bank – the Fund’s first bank investment in nine years – as investors began to aggressively price the risk of an inverted yield curve into bank stocks. We also purchased an energy stock with a strong balance sheet and added meaningfully to two positions initially purchased in the fourth quarter of 2018, Cabot Oil & Gas and Protector Forsikring. 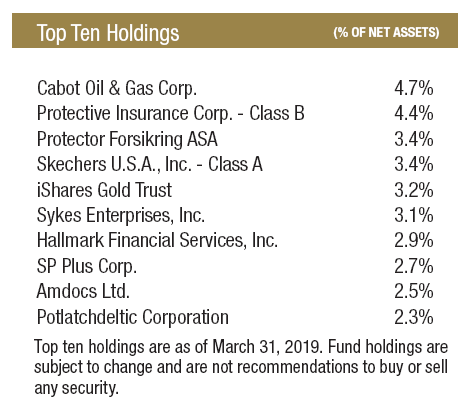 As a result, the Fund’s equity exposure has more than doubled over the last six months.  Despite the meaningful change in positioning, this does not represent a change in the Fund’s strategy.  Over this six-month period, we have been deliberate about utilizing any adverse market conditions or circumstances to take advantage of opportunities presented by volatility – consistent with the core objectives listed above.  Executing on this objective drove the change in the Fund’s exposure, rather than any top-down change in strategy.

However, the increased equity exposure does represent a meaningful step-change in the potential return profile of the Fund.  In that sense, we are excited to be able to address the objective we fell just short on (generating positive absolute returns) through the ten new stocks introduced over the last six months, all purchased at prices we believe will provide attractive absolute returns over reasonable holding periods.  While we reiterate our disappointment in our modest upside performance during the first quarter, we are encouraged by the fact that our best performing stocks were all new holdings purchased over the last six months.

Looking forward, we are committed to executing on our core objectives by remaining focused on capital preservation, while finding opportunities to put capital to work at attractive risk-adjusted returns.  We will remain both highly disciplined and highly opportunistic.  While we cannot commit to doubling the size of the Fund’s equity exposure again over the next six months – cash levels remain dependent on the potential returns available in high-quality small cap companies – we stand prepared to do so should the opportunity arise.  The flexibility to move quickly and opportunistically has been a hallmark of this strategy’s ability to add value throughout past market cycles.  We believe this will prove to be true regarding our recent spike in activity, along with future opportunities to do so as they emerge.