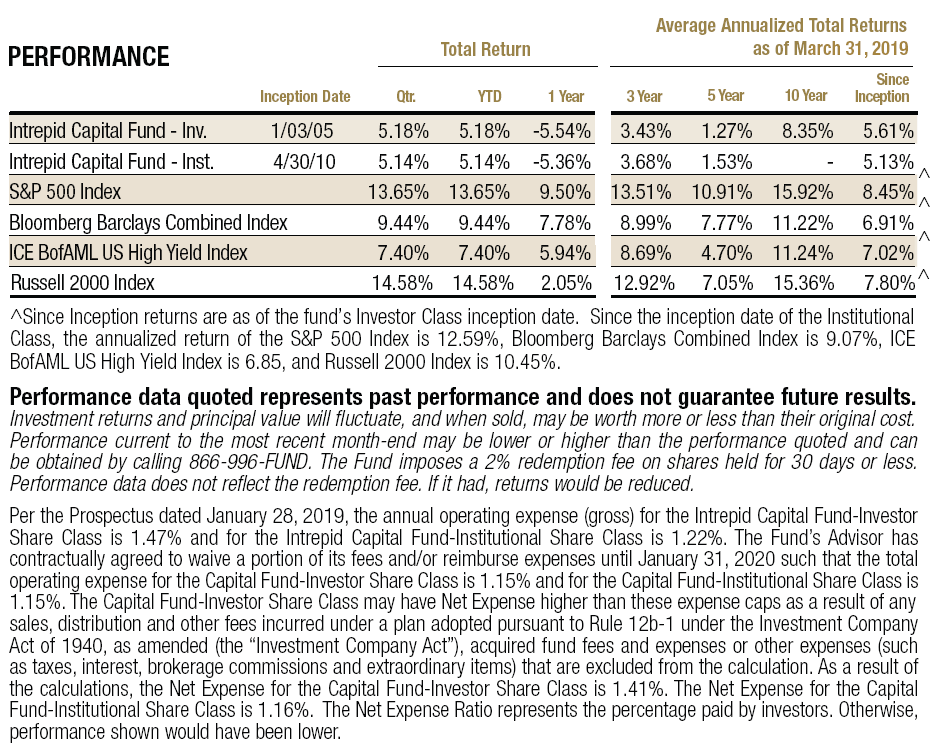 “In prosperity, caution; in adversity, patience.”

I’m beginning to think a neck brace is a necessity as an equity investor after the whiplash the markets have delivered in the last two quarters.  To set the stage for the impressive rally in the first quarter of 2019, we have to look back to mid-December when the Federal Open Market Committee (FOMC) hiked interest rates for the ninth time of this economic expansion, even as global stocks were quickly descending into a bear market.  Markets viewed the hike as a signal the FOMC was serious about curbing excesses in corporate credit – excesses we at Intrepid have discussed at length in previous letters.

But in January the Federal Reserve, led by chairman Jerome Powell, abruptly reversed course.  Mr. Powell merely uttered the word “patience” (four times, but who’s counting?) in an early January interview regarding the Fed’s position for the rest of 2019, which investors interpreted as a sign of the Fed’s willingness to pump the brakes on interest rate hikes, and off to the races the equity markets went.  Mr. Powell and other FOMC members reinforced the expectation that they would revert to supporting the markets with subsequent comments in the financial media during the quarter.  In a classic Pavlovian response, the S&P 500 Index and Russell 2000 Index both posted returns in the low teens for the first quarter ended March 31, 2019, the best quarterly return since the early days of the financial crisis recovery in mid-2009.

That’s the good news.  The bad news is that by returning to its accommodative policies of the last decade in an effort to support asset prices, the Fed risks overheating a healthy economy that by most measures is already running at full capacity and employment.  While positive for markets in the short term, this strategy increases the risk of potentially more damaging excesses down the road.

The sense of borderline panic I observed in the market in December 2018 reminded me of the fourth quarter ten years prior (2008) in the aftermath of Lehman’s failure.  My father, Forrest, is fond of saying, “In times like these, let’s not lose our heads while those around us are losing theirs.”  With that ringing in my ears, and with the help of our analyst team, we were able to acquire a total of ten new securities in the quarter that we believe were mispriced and have long-term merit for our portfolio.  Seven of the new additions were equity holdings, three were corporate bonds, and most were purchased in early-to-mid January before the rally kicked into high gear.  I would like to highlight the three largest purchases. 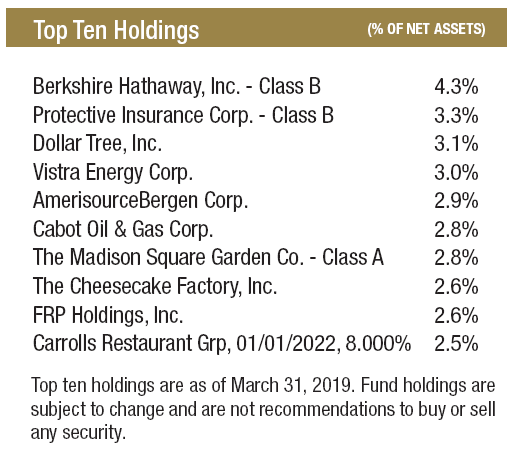 Cabot Oil & Gas (ticker: COG) is a $11 billion market cap oil and gas company that produces over 2% of the United States’ natural gas supply from its large, productive field in Pennsylvania’s Marcellus shale formation.  We believe it is one of the highest-quality energy companies in the mid cap universe, but this quality hasn’t been recognized because of the general negative sentiment around natural gas producers.  As a low-cost producer due to the exceptional location of its reserves, Cabot expects to grow production over 20% in 2019 while reducing capital expenditures and generating strong free cash flow – a combination of qualities that is highly unusual in small and mid-cap energy.

Sykes Enterprises (ticker: SYKE) is a global call center business that provides customer care support for financial services, communication and technology companies and sports a $1.2 billion market cap.  Sykes is juggling several issues that have weighed on its market value: challenging wage and labor availability trends, a reduction in call volumes at major telecom customers, and low capacity utilization at its domestic call centers.  These are common occurrences in the call center industry, and Sykes management is taking active steps to address them by moving customer programs overseas and rationalizing a large percentage of its US capacity.  Margins have already begun to recover to normalized ranges, and the company’s strong balance sheet with net cash should provide additional stability.  We were able to acquire shares after the stock fell 26% between early November and late December, much of which the stock recovered by the end of the first quarter.

Vistra Energy (ticker: VST) was formerly the unregulated subsidiary of TXU, the largest leveraged buyout ever in 2007 and then the largest corporate bankruptcy ever in 2012.  Vistra was spun off in 2016 and emerged from bankruptcy with almost no debt. In 2018, it completed a merger that diversified it away from its concentration in Texas, added scale, and made it the largest independent power producer in the country.

Vistra’s industry of competitive power has historically operated in a highly leveraged, “go for broke” fashion by trying to play the upside of volatile power cycles and shown no supply discipline when building new generation capacity. This has left a trail of disillusioned equity investors who have not yet realized that the industry is showing much more supply discipline than in the past and that Vistra is deliberately trying to structure itself to (1) generate stable, bond-like cash flows at the expense of missing out on wild cyclical industry swings, and (2) virtually eliminate the risk of any future financial distress. We believe equity investors have yet to process these developments and are still punishing Vistra for sins of the industry’s past by valuing the company with a high-teens free cash flow yield – something more appropriate for a stock with a high degree of operating AND financial risk.

In contrast, credit investors have already reacted positively to these changes, and as such have facilitated the company’s ability to refinance existing debt at attractive mid-single digit rates. This discrepancy has created an opportunity to purchase the stock of a company that is generating so much free cash flow relative to its stock price that it is deleveraging, repurchasing shares, and growing a dividend all at the same time.  We hope to benefit from these actions as we wait for equity investors to eventually recognize the improved business model and re-rate the company accordingly.

As affirmation of our vigorous valuation process, it is always pleasing to see businesses we’ve acquired in the Fund be bought out at prices close to (or even better, above) where we have valued their share prices.  This happened with two of our holdings in the first quarter, which made them both top contributors to the Fund with over 25% returns for each.

First, Oaktree Asset Management (ticker: OAK) sold a majority stake in its business to Brookfield Asset Management (ticker: BAM) in a cash and stock deal worth $4.7 billion at the time it was announced.  Oaktree, run by noted distressed debt investor Howard Marks, was organized as a public partnership which, as some of our shareholders know from firsthand experience, requires the generation of a Schedule K-1 for reporting to the IRS.  Private equity competitors KKR & Co. (ticker: KKR) and Ares Management Corp. (ticker: ARES) both chose last year to convert from partnerships to C corporations, a choice that became more palatable because of tax reform.  As KKR COO Scott Nuttall said, “Our stock has been too challenging to buy and too challenging to own, so many investors go elsewhere.”  We believe the move helped lift their respective share prices by simplifying the tax filing requirements and appealing to a broader shareholder base, and Oaktree could see similar halo effects under the Brookfield umbrella.

At an implied 12% premium over the pre-announcement price, we think Brookfield paid a very modest amount for Oaktree, which is a positive for its shareholders and a negative for us as OAK shareholders.  Our estimated fair value for Oaktree was $50 per share, and the buyout was remarkably close to this price at $49 per share.  However, between a healthy dividend yield of almost 6% and the buyout premium, we think the position gave us a reasonable risk-adjusted total return over our five-year holding period.

The second buyout, Stallergenes Greer (ticker: STAGR FP), is a closely held, London-based manufacturer of allergy immunotherapy treatment products that became profitable again in 2018 after several years of operational struggles.  The firm was already 84% owned by Waypoint, a Geneva-based family office run by Ernesto Bertarelli, Switzerland’s richest man, and in March, Ares Life Sciences, a subsidiary of Waypoint, agreed to take Stallergenes Greer private.  The cash buyout of the remaining 16% is Bertarelli’s second largest public pharmaceutical company acquisition in the last year and values STAGR at $830 million, a 43% premium to its pre-announcement price.

After a difficult 2018, it is nice to be off to a positive start in 2019.  The acquisitions of Oaktree and Stallergenes have created some cash within the Fund which we are trying to intelligently redeploy in companies with similar price and quality characteristics to the securities we purchased late in 2018.