The third quarter of 2020 was another period of strong returns in the equity markets. Impressive earnings results from a handful of the largest technology companies helped once again drive outperformance in the large-cap indices compared to small and mid-cap indices. 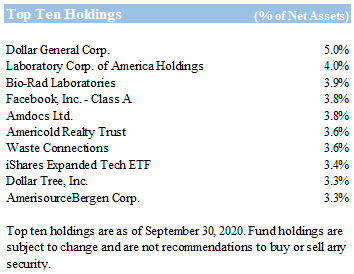 Activity in the Fund was minimal during the quarter. We have worked hard to upgrade the quality of businesses which has resulted in a portfolio of stocks that we believe will continue to create value for shareholders over a long period of time. Therefore, turnover in positions will be much lower than it may have been in the past.

We have received many questions about our plan of action in regard to the Presidential Election. The consensus expectation is for increased volatility which should come as no surprise. Rather than react to the ebbs and flows of who is leading the race in the weeks leading up, or try to predict the outcome by positioning the portfolio for a specific winner, we continue to identify companies that we believe will do well regardless of the outcome. In fact, we welcome any volatility that may occur as it increases the likelihood of being able to reinvest cash from recent sales at more attractive prices.

A new position that we added during the quarter is Utz Brands. The family owned business was founded nearly 100 years ago and grown to be one of the largest salty snack companies in the United States. In addition to its namesake, it owns many well-known brands like Zapp’s, Golden Flake, Dirty Potato Chips, Boulder Canyon, and many more. Utz came public by way of a SPAC (special purpose acquisition company) named Collier Creek Holdings and began trading during the quarter under the new ticker UTZ. The board of directors has former executives from Pinnacle Foods who have a proven track record of value creation and intend to employ the same playbook with Utz. Aside from the long runway of potential M&A, we like the defensive nature of the salty snack category. While the category has been a steady grower over a long period of time, it tends to perform even better in times of distress as consumers eat more salty snacks. We purchased shares of the SPAC before the transaction officially closed. The share price appreciated meaningfully around the time the deal closed to a valuation that was not nearly as attractive, so we decreased the size of the position in the portfolio.

Take Two is a video game developer that we have owned since the beginning of 2019. The company and its peers have benefited from increased engagement due to the pandemic which helped drive strong earnings results when it reported during the quarter. The much-anticipated new console releases that are slated for later this year along with a robust pipeline of upcoming title releases in the next 12 months should help propel the stock higher in our opinion. We are bullish on the gaming industry and believe it will continue to benefit from many secular tailwinds.

We have owned Laboratory Corp for many years and have written about it in the past. Its largest segment operates in a duopoly with Quest Diagnostics in the clinical diagnostics industry. Laboratory Corp has diversified its business in recent years through an acquisition of a CRO (contract research organization). The diagnostics business is a steady low-single digit grower, but we believe the CRO segment will help accelerate revenue growth and expand margins in the coming years.

Western Digital is one of the largest memory chip producers in the world. We had purchased a small position with an anticipation of a recovery in demand as shares remained at depressed levels. However, its earnings announcement in early August provided guidance that was well below expectations. We chose to quickly cut our losses as there is too much uncertainty around the timing of a recovery in chip demand.

Silicom has disappointed investors in recent quarters by pushing out the timeline for new orders. The company reported earnings that were in line with expectations and provided upbeat guidance for the upcoming quarter. Management predicts that we are at the point where delayed orders will begin coming in and we should see a material pick up in business. While the shares trade at a very attractive valuation and the company has over $9 per share in cash, we are losing conviction in the long-term thesis.

So far 2020 has been a year that most will never forget, for better or worse. I doubt the fourth quarter will be the exception.

As always, thank you for entrusting us with your capital.