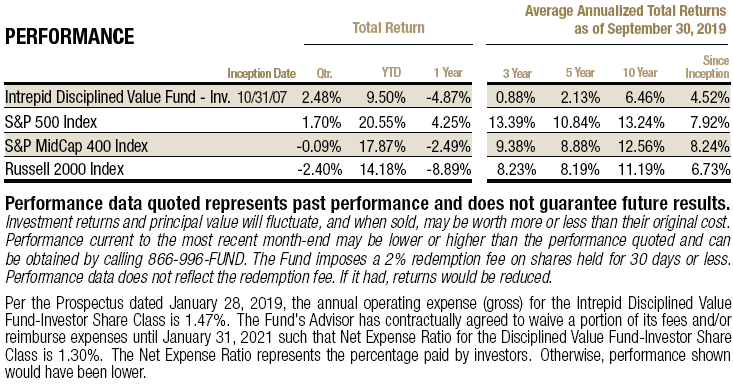 As most US market observers are aware, high earnings growth and high valuations have been the common characteristics shared by the top-performing stocks for the better part of the last half decade.  Late in the third quarter, however, equity market participants witnessed a violent rotation out of momentum and high growth and into value.  As is often the case with abrupt trend reversals, there was no warning and no specific catalyst or identifiable reason for the change.  The most popular thematic trades this year – long the dollar, Treasuries, long-duration bonds and stocks in defensive sectors – simply worked until they didn’t.

While you wouldn’t know it from the flat S&P 500 headline return, September 9, 2019 marked the worst single-day momentum unwind in U.S. equities this decade.[1]  We have highlighted in the last two quarterly letters that growth has been favored over value for an extended period of time, so the change did not come as a surprise.  In fact, we were astounded by how long investors seemingly ignored fundamentals and the extreme disparity between the relative performance of growth and value.

While value stocks received some love late in the quarter, let’s be clear – this may not be the start of a new trend.  It may very well be nothing more than a reset in valuations for the most expensive equities.  However, many economic indicators are beginning to turn, while others are already signaling a slowdown.  If there is something bigger on the horizon, like a recession, we believe value is undoubtedly the best place to be in the equity markets.

The Intrepid Disciplined Value Fund (the “Fund”) returned 2.48% for the third quarter ending September 30, 2019, compared to -0.09% for the S&P 400 MidCap Index, 1.70% for the S&P 500 Index, and -2.40% for the Russell 2000 Index.  We were pleased with how the Fund navigated through the quarter, which included the first Fed Funds Rate cut in over 10 years, followed by a sharp selloff in August and another rate cut in September. 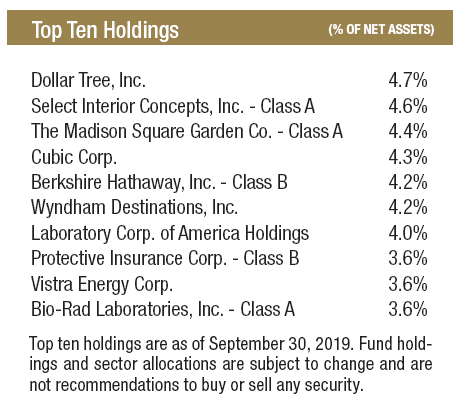 We continue to find pockets of value in unloved and misunderstood parts of the market.  One example is Select Interior Concepts (ticker: SIC), an undervalued small cap that started trading publicly about a year ago and is only followed by two sell-side analysts.  The Atlanta-based building materials and services company completed a direct stock listing last year, and in doing so missed out on the publicity surrounding a traditional IPO.  As a result, it has likely fallen under the radar of many investors.  We began building a position late in the second quarter and into the third quarter.  Today, it is the largest holding in the portfolio.  The company operates in two segments – Residential Design Services (RDS) and Architectural Surfaces Group (ASG) – that were part of a roll-up strategy beginning in 2014 by Trive Capital, but whose roots extend back over 30 years.

Residential Design Services is a leading provider of interior design and installation services for flooring, countertops, and cabinets and accounts for roughly half of the parent company’s operating profits.  It operates 35 locations, including 21 design centers.  RDS is commissioned by top national builders including Toll Brothers, D.R. Horton, and Lennar, to work directly with the homebuyers to help customize their home with the specific style they want to achieve.  Upselling is one of the business’ core strengths, as it has had an 85% success rate in convincing buyers to upgrade from the standard choices to higher margin products, which benefits both RDS and the homebuilder due to a revenue share agreement.  Furthermore, RDS has built a reputation for dependability – it has never missed a closing date deadline in its 30-year history, which is likely one reason why 90% of its business has been repeat customers.  This business has strong organic growth and is expanding geographically via tuck-in acquisitions.  The market is highly fragmented, with the top six players combining for only 20% market share.  The remainder is composed of small regional and local operators, which RDS has been able to acquire at very attractive multiples.

Architectural Surfaces Group distributes natural and engineered stone slabs and tile.  About 60% of sales is repairs and remodeling, which have tended to hold up relatively well in recessions.  As a distributor, ASG’s business model has high variable costs, allowing management to quickly adjust if end market demand fluctuates.  This business is expanding as well and currently has about 8% national market share.  Management has opened three storefronts in new local markets as a test, and the results have been promising.  The upfront investment is about $1 million and at the end of 12 months the stores are at a run rate of $1 million in EBITDA.  Longer term, we believe this may be an avenue of growth, but in the near term most of the growth is expected to come by way of small accretive acquisitions in addition to steady organic growth.

We purchased shares at less than 7x EBITDA, which is a discount to where peers trade.  One potential catalyst for a higher price would be a split of the two businesses into separate companies.  There is very little cross selling or synergies between Select Interiors Concepts’ two segments, and a breakup could add value by allowing the public markets to value them independently at different multiples.  After pressure from an activist investor, Select’s board of directors announced in May that it has hired an advisor to oversee a formal strategic review, which we view as a positive development.

Another potential near-term catalyst would be refinancing ASG’s term loan, which carries a balance of $154 million and an egregious effective interest rate of 9.69%, or about 600 basis points higher than the rate charged on its credit facility.  We believe the shares of Select Interior Concepts are materially undervalued under the current structure and agree with the activist in that significant value would be unlocked via a strategic action like a split or outright sale of the business.

A shoe business may sound like a boring investment, but Skechers is quite the opposite.  It has both a wholesale business and retail stores, and it sells its products globally.  Skechers is expected to grow much faster than the industry, yet it is priced as if it is an old sleepy brand.  In its most recent earnings report, the company blew out sales and margins expectations.  We used this as an opportunity to trim our position as shares approached what we estimate as intrinsic value.  Later in the quarter, as more news broke about Chinese tariffs, the shares came under intense pressure despite management’s claim that the company has no tariff risk.  We repurchased shares after they had fallen to levels that we deemed to more than discount any potential tariff risk, and we continue to hold a moderate sized position today.

Vistra Energy is one of the largest power producers in the country and is a position we discussed last quarter as a top detractor.  We noted that despite having hedged 100% of its natural gas and power price exposure for the year, the market did not care.  Shares were punished due to unfavorable weather trends in Texas that had caused a sharp selloff in 2019 and 2020 peak prices.  If the market was determined to overreact on the downside, we were happy to see that at least the same pattern held true when Texas experienced an extended heat wave this summer, causing peak power prices to skyrocket.  The shares reacted positively and shot back up to the highs for the year.  We continue to view Vistra as an attractive and undervalued business.

Dollar General operates 16,000 stores across the country selling low-priced goods.  It has been a long-term holding in the Fund.  We increased our position size in March after the market overreacted to what we considered a solid earnings report.  The company has executed flawlessly in the two earnings reports since then, which has helped buoy shares.  Dollar Tree (ticker: DLTR) shares have significantly lagged Dollar General’s this year as it works to turn around its Family Dollar banner.  While we still admire Dollar General’s business, its valuation is extended.  On the other hand, Dollar Tree remains undervalued and it represents our largest holding.  We believe that the dollar stores are uniquely positioned in the retail landscape.  They have a long runway of future growth and remain insulated from some of the risks other retailers are facing.

Data analytics and data solutions company Teradata has disappointed investors in back-to-back quarters.  It announced earnings at the beginning of August that were again muddied by its transition to a subscription model.  We believe investors were disappointed with the 11% constant currency recurring revenue growth, as well as guidance that implies a sharp acceleration in the fourth quarter.  We believe that once free cash flow begins to grow again, the shares will rerate.  The timing of the inflection has taken longer than we originally expected, but we anticipate seeing evidence of an upward trajectory in the intermediate term.  Historically, management has opportunistically bought back shares after material declines in price, and we suspect the company may be a buyer at current levels.  As part of our risk management process, we did not add to the position during the quarter despite it hitting new 52-week lows.  Assuming the transition goes as planned from here, we value the business significantly higher than where it trades today.

Party City is the leading party goods and Halloween retailer in North America.  Our investment did not work out as planned.  The helium shortage proved to be a bigger problem than we expected and much worse than management had initially communicated to shareholders.  The issue has not been fully resolved after a year, and while the company has found additional sources for helium, it comes at higher prices.  The company carries a large debt load – something we typically try to avoid – which has proven to be problematic as sales have been negatively impacted by the helium shortage.  The company is now focusing on deleveraging by selling off assets like its Canadian stores.  Our initial thesis did not play out as expected, so we acted by exiting the position during the quarter.

Discovery is one of the world’s largest pay television programmers.  Its brands include Discovery Channel, TLC, Animal Planet, HGTV, Food Network, and many other popular networks.  Discovery’s poor share price performance in the quarter was not due to a deterioration in underlying business performance.  In fact, Discovery reported accelerating US ad growth, US affiliate fee growth, international ad growth, and international affiliate fee growth.  The shares outperformed some competitors, so we would point to negative sentiment surrounding the industry as the culprit for Discovery being a detractor in the third quarter.  We used the weakness to add to our position.

The Fund exited the quarter with a high cash level of 14.9%.  The increase is largely a byproduct of exiting several positions, including Party City and Western Union (ticker: WU), which hit our valuation.  From a risk control standpoint, we believe the portfolio is defensively positioned yet the valuations of our current investments leave room for significant upside.  We continue to work through our list of potential new investments and remain excited for the future prospects of the Fund.  Thank you for your investment!