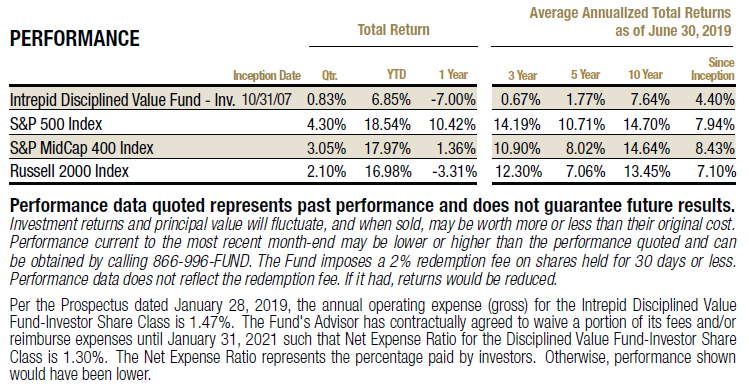 Looking back over the first half of 2019, there continues to be a wide and still growing disparity between the returns of different investment styles – a divide that is not captured by simply looking at the most popular indices. As has been the case for the last 3-4 years, investors again favored growth stocks over value stocks in the second quarter. The same phenomenon applied to the other axis of the commonly recognized Morningstar style box grid, as large cap outperformed both mid and small cap. Combining style and size shows the greatest discrepancy, as large cap growth has dramatically outperformed small cap value over the last several years. I would encourage you to read the Endurance Fund’s commentary for a more detailed historical analysis of growth vs value.

The drawdown during the month of May was just over 5% for the Fund. Losing any amount of money is hard to digest, but when you consider that an index like the S&P MidCap 400 was off about 8% over that time, we were pleased to see our portfolio of undervalued securities begin to separate itself in what was a volatile month. However, since the sell-off in the market was short-lived, we did not entirely make up lost ground from earlier in the quarter.

We aimed to upgrade the quality of businesses in the Fund throughout the first half of 2019 and are pleased with the composition of the current portfolio. Cash levels hovered around 10% for much of the quarter before increasing in June as we exited a few positions entirely and trimmed others.

The top three contributors to performance for the quarter were Amdocs (ticker: DOX), Take-Two Interactive Software (ticker: TTWO), and Laboratory Corp of America (ticker: LH). In fact, we wrote about all three of these companies in our first quarter letter.

Amdocs reversed course in the second quarter after coming under pressure earlier in the year when a short seller published a report questioning its business practices. The company reported solid earnings results in May which included steady revenue growth and EPS that exceeded expectations. The results helped answer concerns raised by the short seller by showing a decrease in days sales outstanding (DSO) and strong cash flow generation. We believe that most of Amdocs’ business is doing quite well but recognize the challenges posed by sluggishness in its AT&T business. We trimmed the position during the quarter and still hold a meaningful weight in the company.

Take-Two is a position we initially purchased during the first quarter when most of the video game publishers were near 52-week lows. There wasn’t a particular catalyst that helped shares rebound in the months since, rather many small data points that were favorable for the sector and Take-Two in particular. Take-Two is not a typical investment for us as the cash flow and earnings tend to be lumpy due to title release cycles. However, the company has a growing revenue base that is recurring in nature, which should help smooth financials in the future.

Viewed over a longer period of time or in a year when one of its franchise titles is released, a company like Take-Two is actually quite cheap. Grand Theft Auto 5 was released in 2013 and earned $800 million in its first day and $1 billion within three days of its release, becoming the fastest-selling entertainment product in history. While a release date has yet to be confirmed, we expect Grand Theft Auto 6 will hit the market shortly after the new generation of gaming consoles are released, which is likely a late 2020 or early 2021 event. We remain bullish on the gaming sector and believe there is a long runway of growth ahead. We view this as an attractive opportunity to own an asset-light business with high margins and growing end markets with a potential for a low double-digit free cash flow multiple.

LabCorp continues to rebound from the rocky fourth quarter of 2018. Headwinds remain in its core diagnostics business, which accounts for about 60% of revenue, due to both reimbursement cuts and share losses associated with the opening of a large managed care contract to Quest. Its Covance business has turned the corner after a long period of disappointing results following the acquisition a few years ago. Now Covance is helping to drive growth at LabCorp. Furthermore, Covance sports operating margins that are far below peers, so we expect to see improvement as the company remains committed to attaining similar margins to its peers. We trimmed the position during the quarter to right size the weight, and it remains one of our top holdings.

Vistra Energy is a position we initiated in the first quarter that has unfortunately been a major drag on performance. While the company has already hedged 100% of its natural gas and power price exposure for this year, the market does not seem to care. Weather trends in Texas have been mild, causing a sharp selloff in 2019 and 2020 peak prices.

Aside from the movement in the stock price, Vistra Energy as a business is doing quite well. It refinanced existing debt at more favorable interest rates, repurchased over $1 billion worth of stock in the past year, and recently initiated a dividend, all while keeping leverage at less than 3x EBITDA. The company is committed to generating stable cash flows, and we remain confident in its prospects as a long-term investment.

Teradata has been mentioned in many past commentaries at Intrepid as both a contributor and detractor. With this in mind, we have tried to adjust the position size accordingly to both capture moves higher and limit the damage when it moves lower. We materially trimmed our position during the first quarter after shares appreciated substantially without much change in the outlook for the business. The earnings report in May was accompanied by a disappointing outlook and served as a painful reminder that the transition to a subscription-based business model still has a long way to go.

We continue to believe that we are at or near an inflection point in that transition, where free cash flow will begin to rebound to levels historically seen. Until then, the shares may be range bound. We added to the position after it fell back near the 52-week low and it is now one of our larger weights.

Bank of New York Mellon has been under pressure this year primarily due to lower interest rates. It faces other headwinds like muted client activity, low exchange rate volatility, continued pressure on deposits, and secular pressures in asset management. The valuation remains compelling, but the business is not growing, and it carries both cyclical and market risk. Non-interest-bearing deposits at trust banks have fallen to levels last seen in 2011-2013. While a recent boost to the dividend and continued share buybacks are nice, they are not reason enough to own the stock. Despite these mostly short-term pressures, the company has recently won some significant new business and continues to invest in technology which we expect will improve long-term results. We have owned Bank of New York Mellon for many years and will continue to keep a watchful eye out for any sign that the outlook is eroding further.

We continue to find undervalued ideas despite major indices being at or near all-time highs. We purchased a few new positions in the quarter, including Shutterfly (ticker: SFLY). The company sells customized greeting cards, stationary, photo albums, and many other personalized items. We began looking at Shutterfly early this year after it provided disappointing guidance and lowered its synergy estimates due to difficulties with the integration of its Lifetouch acquisition. Lifetouch is the national leader in school photography and was Shutterfly’s largest acquisition in its history.

At the same time, management disclosed that it had been approached by a 3rd party (but had not received a formal offer) that was interested in acquiring Shutterfly. As a result, it formed a committee to review strategic alternatives. The share price eventually retraced back to its lows over the next few months before rumors began to swirl in the media about advanced deal talks.

We decided to purchase a small weight. There is a lot to like about Shutterfly’s business—it has the largest market share, high customer retention, generates strong free cash flow, and is vertically integrated. However, the company has struggled to grow in its core business recently. We viewed the Lifetouch acquisition favorably, just not to the extent that investors did when the stock nearly doubled in price shortly after the acquisition was first announced.

When we bought Shutterfly, we believed that if a deal were to happen, a fair price would be $55, and a strategic acquirer could potentially pay as much as $60. If a deal did not occur, we were happy owning the business longer term, as we expected organic growth to resume and financials to improve. Shortly after we established our position, Apollo Global announced that it would purchase Shutterfly for $51. We are disappointed in the price, since in conjunction Apollo is also acquiring Snapfish, which makes this a quasi-strategic acquisition. Nonetheless, we are happy to have made a profit on the investment and decided to sell out of the position as it approached deal price.

Our wish list of securities that we would like to own if the share price were to drop continues to build. While we would welcome downside volatility in the market in the hopes of acquiring these names at great prices, we are optimistic about the Fund’s current positioning should the market continue to appreciate.