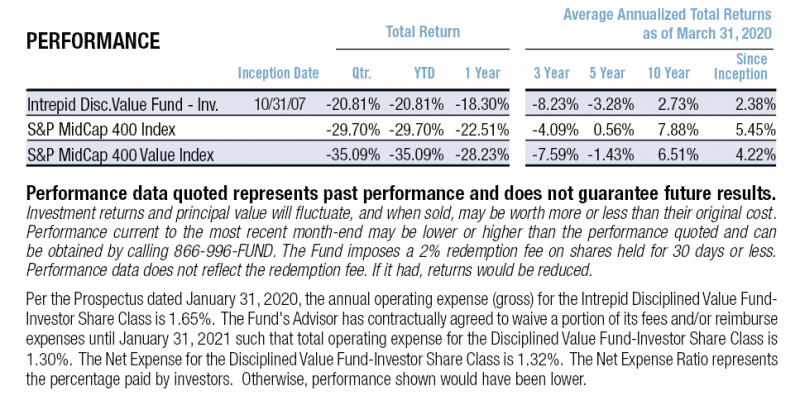 We at Intrepid Capital have long admired volatile markets as those periods (which have been few and far between over the past 10 years) tend to be when we are most active in our portfolios.  The first quarter of 2020 was one for the record books as volatility spiked to all-time highs and the S&P 500 descended into bear market territory in just 16 days, less than half the time it took for the previous record back in 1929, which set off the Great Depression.  As COVID-19 spread across the globe forcing governments to put measures in place that effectively shut down economies, uncertainty ensued.

The S&P 500 has moved over 1% in 24 of the last 25 trading days, which has only occurred two other times, both of which were during the Great Depression.  Volatility presents opportunity.  Opportunity to put cash to work and opportunity to upgrade the portfolio to more attractive investments.  Volatility often results in price moves that far exceed a corresponding change in value, and that is exactly what we witnessed in the first quarter.

All domestic equity indices were off materially for the quarter across the board with large caps continuing their outperformance versus small and mid-caps.  The S&P 400 Midcap Value Index was absolutely pummeled, dropping a whopping 47.50% from its high in January to its low in March.  It ended the quarter with a 35.09% decline compared to The Disciplined Value Fund which declined 20.81%.  The Russell 2000 was off 30.61% for the quarter while the S&P 500 was the most resilient with just under a 20% decline.

The Fund’s stock selection aided its performance in the quarter as the portfolio ex-cash outperformed its midcap benchmark.  Many of the larger positions going into the crash held up quite well like Dollar General which benefited from having 16,000+ stores across the country where people went to stock up on goods.  Cash levels varied in a wide range of zero to over 20% during the quarter as we navigated through the volatility.  At quarter end cash was 9.3%. 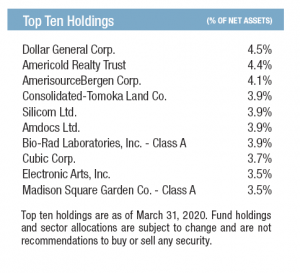 Americold Realty Trust is the second largest operator of temperature-controlled warehouses in the U.S. and globally.  It controls 178 warehouses that have a total capacity of 1.1 billion cubic feet.  It is the only pure-play publicly traded cold storage REIT.  We like the cold storage business due to its “mission critical” nature as well as the overall stability of the industry.  The company has a demonstrated ability to grow organically at a reasonable rate in addition to having a long runway of further consolidation opportunities to drive growth.  We view Americold as a way to participate in the growth of cold food/grocery delivery over the long term.

Cable One is a cable operator that was very early in the adoption of shifting focus to its high margin internet business at the expense of its video business.  This has resulted in expanding margins and organic growth that far exceeds its peers.  The company’s size is in the sweet spot to where it can acquire small operators and still realize meaningful accretion.  We suspect Cable One may be an acquisition target as there are limited opportunities for the large players to further consolidate.

Visa and Mastercard are the two largest electronic payment processors in the world.  Their large scale provides competitive advantages over peers and we anticipate continued transaction and volume growth over a very long period of time.  The businesses will of course be negatively impacted by pullbacks in consumer spending due to the coronavirus, but we felt that the share price had more than reflected the risks at the time of our purchases.

Facebook is much more than its namesake as past acquisitions like Instagram and WhatsApp have proven to be massively successful.  The company’s reach to billions across the globe allow it to garner the second largest market share of the fast-growing digital advertising industry.  Pullbacks in advertising budgets this year have caused earnings expectations to come down by over 20% and the share price had dropped even further.  When advertising spend rebounds Facebook should be a large beneficiary.  We purchased shares at an all-time low multiple on what we believe will be depressed earnings.

Activity in the portfolio went beyond these new positions—we adjusted many of the existing positions to become aggressive as valuations became more attractive.  In other words, we aimed to upgrade the portfolio to have more exposure to businesses that were both the highest quality and whose stock price had fallen the most.

The Federal Reserve and our lawmakers did their best to prevent us from doing so by introducing unprecedented measures to help stem losses in the stock market and shore up the economy.  In a series of moves, the Federal Reserve slashed interest rates by 150 basis points, introduced unlimited quantitative easing, and said it will buy corporate bonds and bond ETFs.  Congress introduced a $2 trillion stimulus package and quickly thereafter signaled that there would be more to come.  The Federal Reserve’s balance sheet ballooned in late March and the equity markets followed suit.

We can’t help but be deeply concerned with the recent jobless claims data.  About 16 million people have filed for unemployment over the past three weeks, shattering prior records each week by a long shot.  Will these jobs all come back like flipping a switch when the economy is “reopened?”  We tend to think not.

We mentioned Cable One and Facebook as new positions.  They also were two of the top three largest contributors to performance during the quarter along with AmerisourceBergen (ticker: ABC).  Kroger (ticker: KR) was also a strong performer during the quarter.  We exited our Cable One position shortly after the end of the quarter as the stock rocketed up above our estimate of intrinsic value.  We still own the other businesses.

AmerisourceBergen is one of the largest drug distributors in the world.  It has been the subject of much controversy in recent years for its role in the opioid crisis.  Uncertainty around the potential liabilities has acted as an overhang on shares, but recent developments have helped alleviate some of these concerns.  We have viewed Amerisource as a defensive security all along and its shares exhibited these traits during the market turmoil.  We continue to value shares materially higher than where they currently trade and expect the multiple to expand as we move past the current issues.

Kroger is the largest traditional grocer in the U.S. and is one of the few beneficiaries of the coronavirus outbreak.  With restaurants shutting down and residents across the country being ordered to shelter in place, consumers rushed to stock up on goods.  Kroger is a natural destination as it is a one-stop shop where consumers can get food, alcohol, paper products, and fill their car up with gas in addition to picking up medication from its network of nearly 2,200 pharmacies.  The company disclosed on April 1 that identical store sales ex-gas were up 30% for the month of March.  While we may see gross margin pressure due to the nature of these sales and demand will surely taper off, we remain optimistic and believe shares continue to be undervalued.

Discovery fell victim to advertisers slashing budgets as they are under significant pressure due to little consumer demand.  It was also widely expected that the Olympics would be cancelled or delayed which would further hurt Discovery’s profitability.  It became official in late March that the Summer Games would not take place this year.  Despite this, Discovery will still generate significant free cash flow in 2020.  We would like to see the company pay down some debt as we believe elevated leverage also played a role in the poor share price performance.

We had always thought of Cubic and its businesses as defensive, so we were surprised to see shares act as poorly as they did.  Much of the transportation segment’s revenue is contracted so ridership at the large metropolitan clients should not be a factor.  These municipalities are undoubtedly under pressure, but we believe they will honor their contracts.  The company’s debt profile may have played a role in the share price performance, but Cubic took steps to address this in late March when it announced it had entered into a new term loan and expanded its revolver.  Leverage is still high, but its borrowing capacity increased by 30%, interest rates are now lower, and new covenants provide more flexibility.

Alpine Income Property Trust is a REIT with primarily single tenant triple net lease properties; however, many of its tenants are in the retail and entertainment subsectors being impacted the most by the lockdowns.  There have been reports of many businesses, even those that appear to be on solid financial footing, asking for rent concessions.  We believe that some of this is posturing given the potential handouts (forgiven loans, etc.) that may come their way, but it is negatively impacting landlords including Alpine.  Shares in Alpine are much less liquid than we prefer which likely exacerbated the moves in the stock.  We reduced our position to manage risk but believe that the company’s net asset value is well in excess of where shares trade today.

Could we look back a year from now and all of this is just a distant memory, or is there more volatility to come?  Whichever the case, we are more optimistic about the portfolio’s positioning today than we have been in years.

Thank you for entrusting us with your capital.