“Houston, we’ve had a problem.”

Do you ever feel like the demands and distractions of everyday life keep you from stepping back and focusing on the big picture?  You’re not alone.  The constant fire hose of news and the flashing of red and green ticker symbols often leave me wondering if I should be tested for Attention Deficit Disorder at my next physical.  There are times where I feel as if I have taken a paper clip from my desk drawer and inserted it into the closest electrical socket.

Writing these letters always provides a healthy pause button from the portion of my days that I spend within 24 inches of a Bloomberg screen.  The end of each quarter is an opportunity to move from my desk, with its flashing monitors, to the couch in my office, sweep all the mental clutter into the closet for an hour, and reflect on where we have been and where we might go.

The last two months have marked a meaningful (and hopefully lasting) shift in investors’ attitudes toward risk.  January of 2018 started out like most of the prior year, with asset prices steadily setting new highs while volatility was near record lows.  The S&P 500 extended its record run of 15 straight months of gains, ending the month an impressive 5.7% higher.  Investors, for their part, saw no reason to break from the old “What, me worry?” attitude of Mad Magazine’s Alfred E. Neuman. 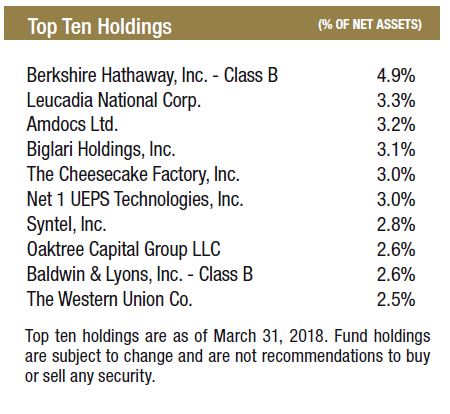 We lagged in January as our peers and their clients appeared to be getting free handouts from generous Mr. Market.  This pain was compounded when I was out seeing clients and had a polite 80-something year old woman tell me Intrepid was just too conservative for her.  Looking back on that conversation, I have to wonder whether it was the proverbial bell ringing at the top.

Hardly a week later, with the 10-year Treasury yield jumping above 2.8% for the first time in four years along with rising inflation expectations, the CBOE Volatility Index (the “VIX”), nicknamed the “Fear Index,” almost tripled in the span of two trading days, taking billions of dollars to “investment heaven” in the process.

How did this happen?  The answer, unsurprisingly, boils down to good old-fashioned Wall Street greed.  The VIX started out simply as a method of tracking the underlying implied volatility of options on S&P 500 companies.  Over time it gained quite a following from traders and investors who wanted an easy, real-time proxy for market sentiment.  But why should Wall Street be content just to track something when they could be selling it?  Thus, over the last 5-10 years there has been an explosion of strategies and products linked to volatility, usually using a combination of futures, options, and other derivatives with the VIX as their underlying benchmark.

Investors, starved for yield from traditional sources for nearly a decade, piled into these newly packaged strategies under the faulty assumption that this was easy money.  One of the most popular flavors was exchange-traded notes (ETNs) – basically IOUs from major banks that could be bought and sold on the open market – designed to roughly track the inverse of VIX.  These “short-vol” products were predicated on the belief that conditions of low volatility would last indefinitely.

Sitting in front of me is a promotional email for a family of leveraged short and long volatility ETNs (as if 1x exposure wasn’t risky enough) that includes three full pages of legal fine print indicating that the products are only for sophisticated investors.  The lawyers go on to (1) warn would-be buyers not to treat the strategies as buy and hold investments, (2) recommend that they monitor their positions multiple times a day, and (3) note that the well-known major bank backing the notes could redeem them at any time, potentially at a large loss to the holder.

I hope you’ll agree with me that these don’t exactly sound like the hallmarks of a sound investment.  But as we’ve learned in past bubbles and market cycles, no amount of fine print risk disclaimers will keep people from chasing performance, and short volatility was the hot trade of 2017 (with the exception of Bitcoin).  One popular inverse VIX product with the fitting ticker XIV (VelocityShares Daily Inverse VIX ST ETN) returned 188% for its holders over the course of the year, drawing in millions of dollars from new buyers wanting a seat on the gravy train.  Who would have thought that not just retail investors, but endowments, pensions, universities and professionals on Wall Street would be selling what they should have been buying (the possibility of higher volatility), in many cases with a scoop of leverage on top?

It was fun while it lasted.  When the VIX spiked in early February, XIV and a handful of similar products that had been trading near all-time highs literally became worthless overnight and were liquidated.  In my third quarter 2017 letter, I lamented this kind of behavior when I commented that “irrational decision making is rewarded [and] buyers of arcane complex strategies seem to reap all the profits.”  Leveraged trading in the VIX sure seems to qualify.  The moral of the story?  Risk matters most when it is least visible.  R.I.P. short vol.

To be clear, these short-term results are disappointing to us as a firm and to me as the lead portfolio manager of the Fund.  The silver lining, though, is that our underperformance in the most recent periods was not driven by excessive risk-taking or exposure to the broader market downturns in February or March.  Most of the Fund’s decline in the first quarter was due to company-specific issues at a handful of businesses in which we own a stake.  We believe these companies have long-term merit and trade for less than our conservative estimates of business value, but that is no guarantee against short-term price fluctuations.  Normally, I like to lead off with recent successes, but in this instance, I think it would be more helpful to shareholders to understand the drivers of shorter-term negative performance.

Four of the largest detractors in the Fund were the same for the six-month period and the most recent quarter ending March 31, 2018.  These included Corus Entertainment (ticker: CJR/B CN), Retail Food Group (ticker: RFG AU), Patterson-UTI Energy (ticker: PTEN), and Net 1 UEPS Technologies (ticker: UEPS).  Corus and RFG together were responsible for more than 60% of the Fund’s decline since January and deserve further explanation.

Our thinking about Corus has been thoroughly documented by Jayme Wiggins in current and past Endurance Fund commentaries, which are well worth a read.  The Canadian media company’s results in January, which included further declines in TV advertising and subscriber revenue, further eroded our confidence that the company will be able to adapt to the move away from traditional bundled cable in Canada.  We reduced our exposure on the news and exited our position by the end of March.

Retail Food Group is an Australian franchisor of bakery, coffee, and quick service pizza restaurants and first entered the Fund in December.  The company’s stock has been pummeled by a series of negative media reports alleging mistreatment of franchisees by the parent company.  We believe the allegations are overblown and distort the facts, but the company’s image has suffered as management has done little to set the record straight.

The stock had already experienced more than a 60% decline over a two-week period when we established our position, but catching this falling knife has been more hazardous than we expected, as the shares declined further in the first quarter on renewed media attacks and disappointing earnings.  We still believe the underlying business is sound and mispriced, but we are conducting additional due diligence to increase our confidence level in the thesis.

The Fund’s four largest contributors for the six-month period were Syntel (ticker: SYNT), HNZ Group (ticker: HNZ/A CN), Teradata (ticker: TDC), and Royal Mail PLC (ticker: RMG LN).   Syntel and Royal Mail were also leading three-month contributors, along with the 5.75% convertible bonds of Primero Mining.  HNZ is noteworthy, as it was acquired in January at a healthy premium to its previous trading range.  The Primero converts, which we had purchased at distressed prices, are now trading near their face value after the company received a buyout offer from First Majestic Silver (ticker: AG), and we expect them to be retired at par value.

Please keep in mind that when buying companies that are out of favor, as we regularly do at Intrepid, securities that are a drag on performance in one measurement period are often contributors in subsequent periods as the market recognizes their underlying value.  Such was the case a few years ago, when our handful of energy-related holdings weighed heavily on performance in late 2015 but rebounded and drove significant gains in 2016.

We have experienced this quirk, which stems in part from the industry norm of treating calendar months, quarters and years as self-contained measurement periods, many times over the last 23 years.  Please try to have patience, as we believe our and your perseverance should be rewarded in the long run.  I am more convinced than ever that discipline, patience, and common sense are both exceedingly rare qualities in this industry and the keys to success in it.

I would also remind you once again that I eat my own cooking.  As co-investors with you in the Fund(s), my family and the Intrepid family share your hopes and fears, your satisfactions and frustrations as we travel this long road as investors together.

Thank you for entrusting us with your hard-earned capital; it is not a position we take lightly.  If there is anything we can do to serve you better, please don’t hesitate to call.