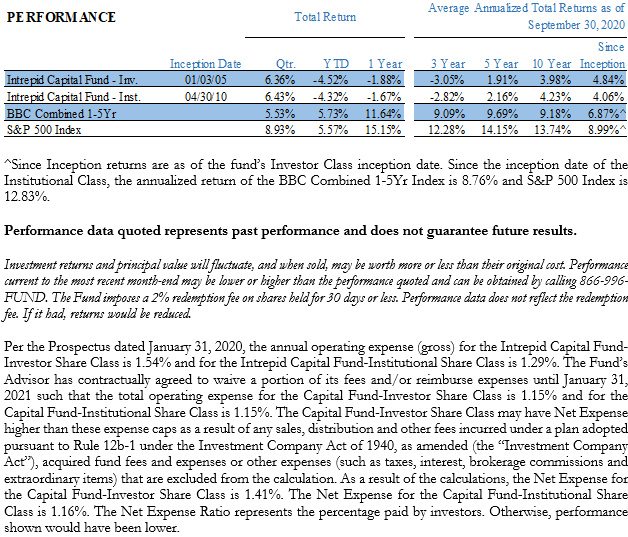 “America is another name for opportunity.”

The Intrepid Capital Fund completed its fiscal year on September 30, 2020. In the final six months of this fiscal year, share prices appreciated considerably from the depths of the government-mandated shutdown in mid-March.

As is keeping with our firm name – Intrepid – and our firm history of often buying when others are selling, we acquired shares in several high-quality businesses which aided our performance.

Despite all of the excitement and terror with the shutdown and the corresponding share price volatility, the shares of the Intrepid Capital Fund (ticker ICMBX) ended largely where they started this time last year (-1.87%). This met our first objective of preserving capital, but fell short in the second objective of participating in some upside potential.

Absent a handful of large capitalization technology stocks, the more broad-based equity indices show a year that has been difficult for equity investors.

I have joked recently about the saying “one dog year equals seven human years” by adding the fact that this is a year I can relate even more to my dogs! As I have survived, and at times thrived, in the past despite the “Tech Crash” of 2000-2002, the Great Financial Crisis of 2008/2009, and now the pandemic year of 2020, I believe the discipline that helped us through those bear markets is the same discipline that will help guide us in these trying times we find ourselves in once again.

This continually applied discipline, along with the fortitude to buy in the face of large-scale liquidations, has generated attractive risk-adjusted returns over time. I feel certain this time will be no different.

Under the category of “if you don’t learn from history, you are bound to repeat it,” I have spent a fair amount of time in the last several years endeavoring to see how we might perform better for you, our shareholders. The big takeaways for me are two-fold. 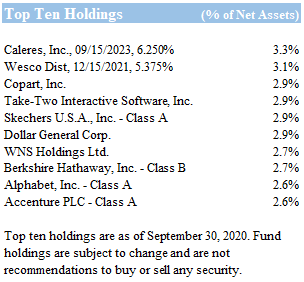 Second, the compounding effect to one’s wealth from holding onto, for extended periods of time (10+ years), a high quality and growing business is substantial.

I have come to these conclusions with both the help of industry consultants we hired seeking improved outcomes, along with close observation of what we owned, how we valued it, and what it is worth today. It is hard to admit, but we often settled for a single or double when there was the opportunity for a multi-bagger.

Our internal focus will be more in that direction, seeking what I refer to as “family heirlooms” – a business with such wonderful characteristics you will leave them to your kids or grandkids one day.

We have now entered into what I politely refer to as the “silly season”. As we bear down once again on a presidential election, aren’t you glad we are only subjected to this once every four years?! Each side panders to what they consider their respective base in an attempt to get supporters to turn out and vote.

The House and Senate are currently at loggerheads in debating whether the next stimulus packages is more or less than $2 trillion. That’s trillion with a “T”. Wow!

In looking across a variety of asset classes, it is no wonder that gold is one of the best performing this year. On a recent long run, I reflected that the effects of Nixon taking us off the gold standard in the early 1970’s have allowed politicians on both sides of the aisle to spend money with impunity. This hit home recently when my son, a full-time college student, was mailed a $1,200 check.

These policies are now making it more “productive” to accept a government hand out than take many jobs waiting to be filled. We are now living through an unprecedented monetary and fiscal stimulus, and to what effect? The Federal Reserve has succeeded in driving down interest rates with their bond purchases of all types (Treasury, High Yield, Mortgage, ETF’s, etc.). The yield on the 10 Year Treasury has effectively been cut in half in the past year (from 1.50% to 0.75%) and set off a boom in the bond market as well as residential housing. The bond market has outperformed the stock market by approximately 2% in the calendar year-to-date period (6% to 4%).

On the fiscal side of the ledger, controlled by legislation from the House of Representatives and Senate, we have bigger deficits than at any point in my lifetime. The uncomfortable spot we find ourselves in requires continued interest rate suppression – as the federal government can’t afford higher interest cost – along with higher tax revenues. The Presidential challenger is promising higher personal and corporate tax rates, not so much to address these fiscal imbalances, but rather to allocate to his party’s priorities.

The Fund enters this “season” with double digit cash balances that should serve to buffer volatility and provide “dry powder” to deploy if we have turbulence before or after the election. Either way, keep a bottle of Pepto Bismol handy!

For the third calendar quarter of 2020, the following were our top five performers:

The bottom five performers were:

For the Fund’s fiscal year ending 9/30/20, the top five performers were:

The bottom five performers were:

Thank you for your continued support. If there is anything we can do to serve you better, please do not hesitate to call.