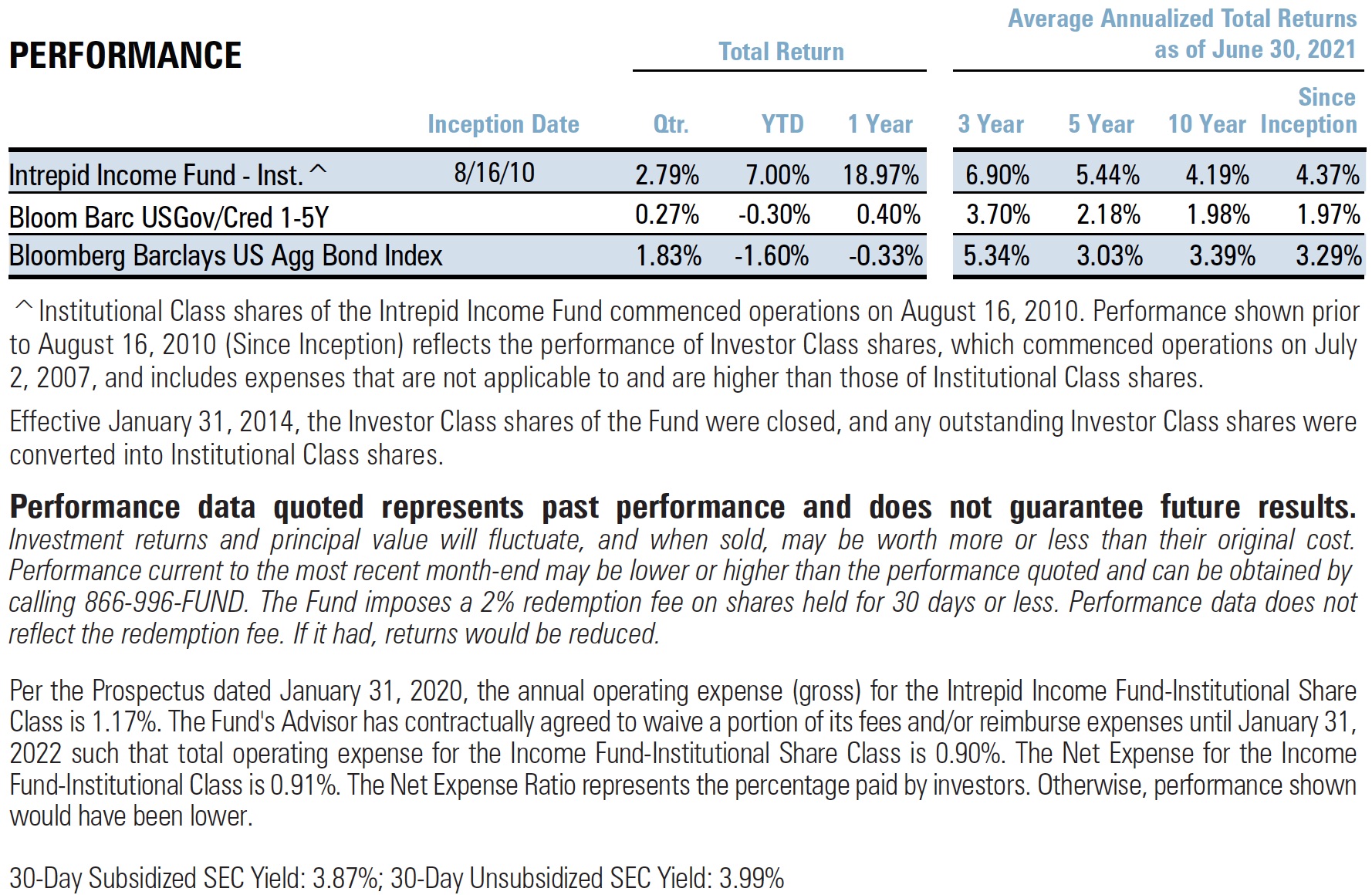 After a brief pause in May, high yield spreads tightened in June, shrinking to the lowest levels since the Great Financial Crisis. When we hear that junk bonds are yielding a number that starts in three, we joke that given the credit fundamentals, 30% would make more sense than 3%. Nonetheless, we struggle to pinpoint the catalyst that might spur the reversal in spreads. The re-opening trade continues to drive animal spirits and it seems like every momentary sell-off is greeted with endless liquidity. We continue to zig-zag through these frothy times by sourcing small issue, off-the-run securities that we believe are creditworthy and offer compelling yield.

We are pleased to report that The Intrepid Income Fund (the “Fund”) gained 2.79% for the quarter ended June 30, 2021. General fixed income performance for the second quarter of the new decade was much improved relative to last year’s second quarter. Rates drifted lower, with the 10-Year Treasury ending the quarter yielding 1.45%, 29 basis points below the end of last quarter. This translated into good performance for the duration-heavy Bloomberg Barclays US Aggregate Index (the “Barclays Aggregate Index”), which rose 1.83% for the quarter ended June 30, 2021. Similarly, the ICE BofAML US Corporate Index (the “Corporate Index”) returned 3.60% over the same period. Riskier debt continued its recovery on the back of improved earnings, with the ICE BofAML High Yield Index (the “HY Index”) gaining 2.77% in the quarter. The shorter-duration Bloomberg Barclays US Govt/Credit 1-5 Year Total Return USD Index (the “1-5 Year TR Index”) returned 0.27% over the same period. 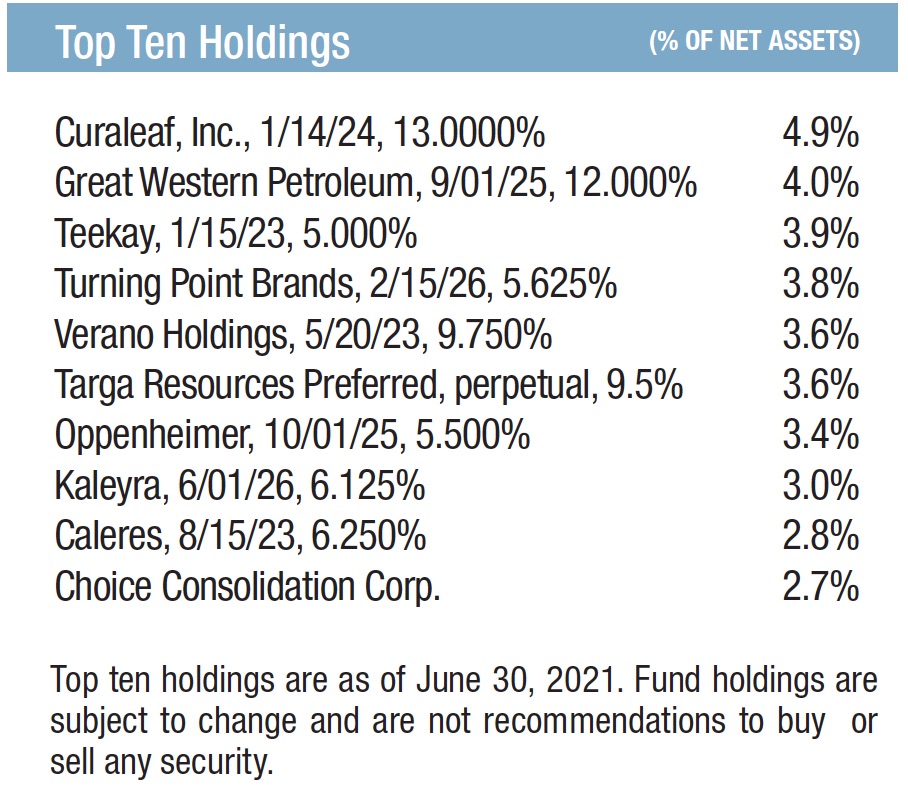 security performance, but also benefited from a positive overall environment for risk assets. Our top contributors for the three months ended 6/30/2021 included:

Our top (and only) material detractors for the three-month period ended 6/30/2021 were as follows:

The Income Fund had six corporate bond positions that were called or matured in the first calendar quarter. We also reduced several positions after they hit our internal yield bogey, selling out of our New Gold 6.375% Notes due 5/15/2025 and United Airlines 6.636% Notes due 1/02/2024, entirely. In a world of shrinking yields, these bonds will be missed.

The proceeds from the bonds that were called, sold, or matured were redeployed into a mixture of existing positions and new positions from borrowers we have lent to before, including:

We maintain a cautiously optimistic view regarding the prospects for economic recovery, and, in turn, for credit markets. We recognize that yields across the entire debt spectrum continue to breach all-time lows, but also believe that most high yield issuers will continue to improve earnings, albeit from a dismal trough. Bank of America Corp. recently reported that second quarter EBITDA for high yield issuers that have reported so far has improved 32% year over year.

Strong liquidity will likely continue to drive demand for anything with a coupon. We anticipate that high yield money managers will point to improving fundamentals, balance sheet deleveraging, and decent relative value as reasons to justify 3% junk bond yields. Nonetheless, the Intrepid team will continue to hunt for short-dated, high-yielding securities issued by credit-worthy companies.

Although we are very proud of how we have protected and grown our investor’s capital given the volatility of the past 18 months, we are even more excited about the way we are positioned for the future. At the end of the quarter, the portfolio had a yield-to-worst of 6.06% and an effective duration of 1.99 years. The investment team continues to turn over every rock in the pursuit of unique, exceptional credits.