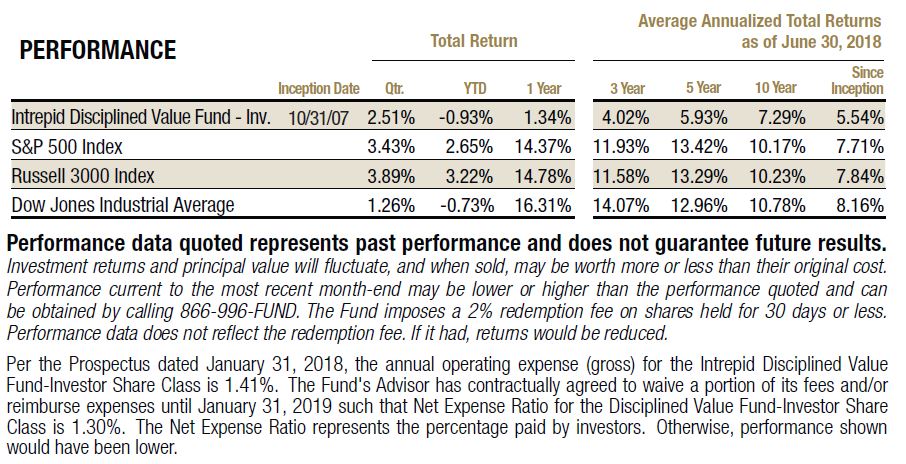 The second quarter of 2018 displayed a clear divergence in performance and volatility amongst asset classes and across geographies.  President Trump’s ongoing trade war has rattled markets and kept investors on edge as new headlines seem to hit almost every day.  Foreign equity markets fared the worst—trade policy along with slowing growth has undoubtedly weighed on China’s equity indexes.  The Shanghai Composite Index crossed into bear market territory late in the quarter and is hitting new lows as I write to you.  Emerging markets as a whole had a very rough second quarter led by Brazil’s Bovespa Index which was down nearly 15% in the quarter.  U.S. equity markets were not immune to all of the trade talk but remained resilient throughout.  While we finally saw increased levels of volatility in the first quarter, it proved to be short-lived.  The good news is we did have pockets of modest volatility that extended into the second quarter, providing a couple of opportunities to make new purchases in the portfolio, which will be highlighted later.

First, I would like to provide a quick update on the Intrepid Disciplined Value Fund (the “Fund”), as there was an organizational change made during the quarter.  On May 18, 2018, I, Clay Kirkland, was named lead portfolio manager of the Fund.  This means that I will be handling the day-to-day responsibilities of managing the Fund with the support of Mark Travis and the entire team here at Intrepid.  By way of background, I am a Jacksonville native who grew up swimming at The Bolles School before going on to compete at Auburn University.  I have been working at Intrepid Capital since December 2012 after interning here during the summer of 2010 while pursuing an MBA from Columbia Business School.

Rest assured that there will not be any drastic changes to the Fund or the way it is managed under my watch.  I will be managing my own money alongside yours with the same philosophy and process that we have always adhered to at Intrepid.  That is not to say that there will not be some subtle changes.  For example, you may notice in the coming quarters a greater focus on mid and large capitalization securities in the portfolio.  Exposure to this part of the market allows the Fund to better complement our strategies that have a heavier emphasis on small securities.  Many of these companies have grown to the size they are today because they have great businesses with clear competitive advantages and strong management teams.  As we progress in our ninth year of this bull market, it is important to consider what may lie on the horizon.  We believe high-quality stocks will fare better in a period of market turmoil than those that we believe have inferior businesses.

The U.S. equity markets held their own in the second quarter compared to most global indices.  The S&P 500 Index returned 3.43% in the quarter while the Dow Jones Industrial Average grinded out a 1.26% return.  The Intrepid Disciplined Value Fund rose by 2.51% in the quarter.  Although stock market valuations are high by historical standards and it has been challenging for us as value investors to find cheap stocks, we were able to identify a few new opportunities in the second quarter.

We established a new position in Verizon Communications (ticker: VZ), a stock we have previously owned in the Fund.  The stock has seen pressure due to increased competition amongst competitors, its large dividend, and high debt balance.  Rising interest rates are generally bad for Verizon.  As borrowing costs increase on its floating rate debt, less cash flow is available to fund dividends and pay down debt.  Investors had been concerned in recent years that the company may have to cut its dividend, but tax reform is expected to increase cash from operations by $3.5 – $4 billion in 2018.  The dividend is safe in my opinion, and the stock currently yields about 4.7%.  Higher bond yields generally cause investors to require higher dividend yields, which was likely another factor in play affecting Verizon’s stock price.  We were able to buy the stock at prices where we believe most of the aforementioned risks were priced in.

The Fund also established a new position in WPP plc (ticker: WPP LN) during the second quarter.  The London-based firm is the world’s largest advertising agency with over 160 subsidiaries.  WPP’s services run the gamut, from traditional advertising where it helps plan, develop, and produce advertisements for clients, to media buying and public relations.  Investors have become increasingly wary of the advertising agencies’ ability to grow revenue, as digital giants Google and Facebook take ad market share and large consumer packaged goods companies respond to their own top line struggles by slashing marketing spending.

Despite these real concerns, we are attracted to the business as it earns very high returns on invested capital.  We purchased it shortly after the founder and CEO, Sir Martin Sorrell, resigned amid allegations of inappropriate behavior and misuse of firm assets.  The stock was near a 52-week low and down over 42% from its highs in early 2017.  As the company works to find permanent new leadership, it has sold off some assets, and we believe additional asset sales of non-core businesses will help strengthen the balance sheet and calm investors’ concerns over high leverage.  If WPP can show improvement in its North American business and gain market share on the digital side, we are confident that the stock will react positively.  Its shares trade at a high single-digit free cash flow multiple and sport a dividend yield of over 5%.

Dollar Tree (ticker: DLTR) is another new position for the Fund.  We have followed the company closely over the past few years and owned its debt in other portfolios at Intrepid.  While the ~6,700-store Dollar Tree banner, distinct for its $1 across the board price point, is performing extremely well, Family Dollar, which it acquired in 2015, has been inconsistent.  The company is still working through the integration and turnaround of the ~8,000 acquired Family Dollar stores.  We expect margins and profitability to improve in the coming years at Family Dollar to a normalized level similar to that of its closest peer, Dollar General.  Retail has been shunned by investors in recent years for a variety of reasons, but we continue to like the dollar store businesses as they have proven to be resilient in even the worst of recessions.

Kroger (ticker: KR) is a new position that was established late in the quarter.  Supermarkets, with their very low margins and intense competition, are not the kind of industry we would typically refer to as a “good business.”  Investors fled Kroger’s shares when Amazon announced it was purchasing Whole Foods last year, and the stock has suffered under an overhang of sorts ever since.

Add to this the fact that the industry has just come out of an unusually long period of food deflation, and you can imagine why the stock is not loved on Wall Street.  Now that it looks like the deflationary pressure is in the past, rising food prices going forward should benefit Kroger.  As the largest supermarket chain in the United States, it has the scale and resources needed to fight off competitive threats and take share as smaller competitors go out of business.  The company is expected to generate over $6 billion in free cash flow over the next three years, providing it with a great deal of flexibility.  Kroger has invested heavily in recent years and continues to focus on its online capabilities and delivery, which we believe is the next area of growth in the industry.

The three largest contributors to performance in the quarter were Cheesecake Factory (ticker: CAKE), Apple (ticker: AAPL), and Baldwin & Lyons (ticker: BWINB).  The Cheesecake Factory has been a solid performer for us since we initially purchased shares.  Rumors swirled in June that the company was in talks to be acquired, sending the shares to new 52-week highs.  We used the opportunity to sell part of our position as the price exceeded fair value, but we still own a meaningful weight.  We have always thought a takeout of the stock was a real possibility and could envision a takeout scenario at a price materially higher than the current level.

The three largest detractors were Western Digital (ticker: WDC), Royal Mail plc (ticker: RMG LN), and Net 1 UEPS Technologies (ticker: UEPS).  Western Digital has been a great performer for us from initial purchase.  Recently, it has been a volatile stock as concerns over NAND chip pricing have whipsawed the shares.  NAND represents about half of Western’s business, which is one reason why we believe the market has been too quick to pass judgment based on every little pricing data point.  The shares trade at very low multiples and the business generates copious amounts of free cash flow–two reasons why we continue to own the stock.

We are at a point now where most market participants are acknowledging that valuations are high.  Could things get even more extreme?  Yes. Could the S&P 500 have already hit the highs for this cycle back in January?  Yes.  Anything is possible.  Therefore, my goal is to position the Fund to protect capital on the downside while capturing a meaningful percentage of the upside.

Thank you for your investment and please know that we are working tirelessly on your behalf.