The water got choppy during calendar Q3. After an intense rally in which the small cap-focused Russell 2000 Index rose over 18% by August 16th, the following sell-off over the next six weeks saw small caps give up all those gains and more.

Inflation and rising interest rates remain the main drivers of the large losses this year in most risk assets (including normally “safer” fixed income asset classes). As the world re-prices for…

…we should expect continued volatility in the small cap market.

To add to this, many investors expect the rising interest rates to slow economic growth – which is already happening in rate-sensitive sectors like housing and automotive sales. 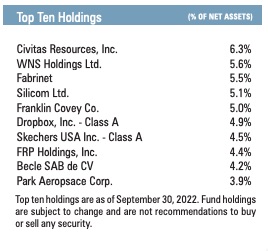 As a result of high inflation, rising interest rates, and slowing growth, most investors view the odds of a near-term recession as “higher than normal.” Combined with the Fed’s insistence on focusing on reducing inflation to long-term stable levels, rather than “pivoting” as it has done in the past to become more accommodative as soon as growth slows, the near-term outlook for small caps is for more of the same: volatility!

We have written before how we spend no time prognosticating what small caps will do in the short-term. We take the same approach with near-term inflationary trends, interest rates, and the economy.

Instead, we focus on building a portfolio full of companies that we believe can achieve structural market share growth over long periods of time and that trade at a reasonable valuation. To do this, we use periods like today to take advantage of the volatility provided by investors more interested in reacting to near-term inflation, rates, and economic news…there’s a lot of data to react to if that is one’s goal.

With that in mind, we were more active than normal this quarter with several new purchases in the portfolio:

Notably, when researching new companies for the Fund, we don’t stick our head in the sand and pretend inflation, interest rates, and the economy don’t matter. They certainly do, and their long-term direction will drive a lot of the performance in the Fund and risk assets in general. We do try to think about them in a more measured, long-term manner than what is covered in the financial news, though.

For instance, one “house view” we have is that earnings in 2021 were – for many industries – driven to record levels by a combination of unprecedented government stimulus and pent-up demand from 2020’s lockdowns. We believe the earnings of many of the companies in these sectors are very susceptible to a slowdown in economic growth given that they were already “over-earning” last year.

We work hard to be careful to buy companies based on valuations of “normalized” earnings. We don’t avoid companies where investors expect earnings to fall – in fact, this often provides the most attractive valuations for entry points. However, we want to make sure the price we pay for these businesses accounts for lower-than-peak earnings and, hopefully, an over-shoot of how far their earnings will fall. Our investment in Carter’s this quarter is a good example of this type of setup, as we believe that 1) Carter’s will never again earn as much money as it did in 2021, but 2) is trading at such an attractive valuation now that we believe investors are over-discounting how far earnings will eventually fall and settle into a “normalized” scenario.

We are also being very careful evaluating companies with leverage or interest rate risk in the Fund given the ferocity of interest rate moves to date. The Fund’s top 10 positions as of September 30th have essentially zero meaningful financial risk (not a single stock in the top 5 has any net debt). However, like the economic risk above with Carter’s, there will be a time where interest rate-driven risk will be “over-discounted.” As a result, we are actively looking for opportunities in companies with all of the high-quality characteristics we normally like but are being over-punished by the market for what might be very manageable leverage.

We won’t even pretend to guess what the rest of this calendar year holds. With an election coming up, the Fed’s projection of more interest rate increases, a slowing economy, and what seems to be an escalating war in Ukraine… there’s plenty to worry about.

But also, if we start to see inflationary indicators flatten or decline (like commodities and shipping rates, which have already begun to move lower), market participants could start to price in a less restrictive (read: more accommodative) Federal Reserve and a large bid for risk assets could re-emerge.

Guessing which one will happen is that just that. We will keep our nose to the grindstone and continue to unearth opportunities for the Fund that we believe will create long-term value. With the emergence of volatility and higher discount rates this year, we view the current environment as much more conducive to generating attractive opportunities than the prior sanguine environment driven by a very accommodative Federal Reserve. As the Portfolio Managers of the Fund, our capital is invested alongside yours and we have recently added to our position in the Fund.