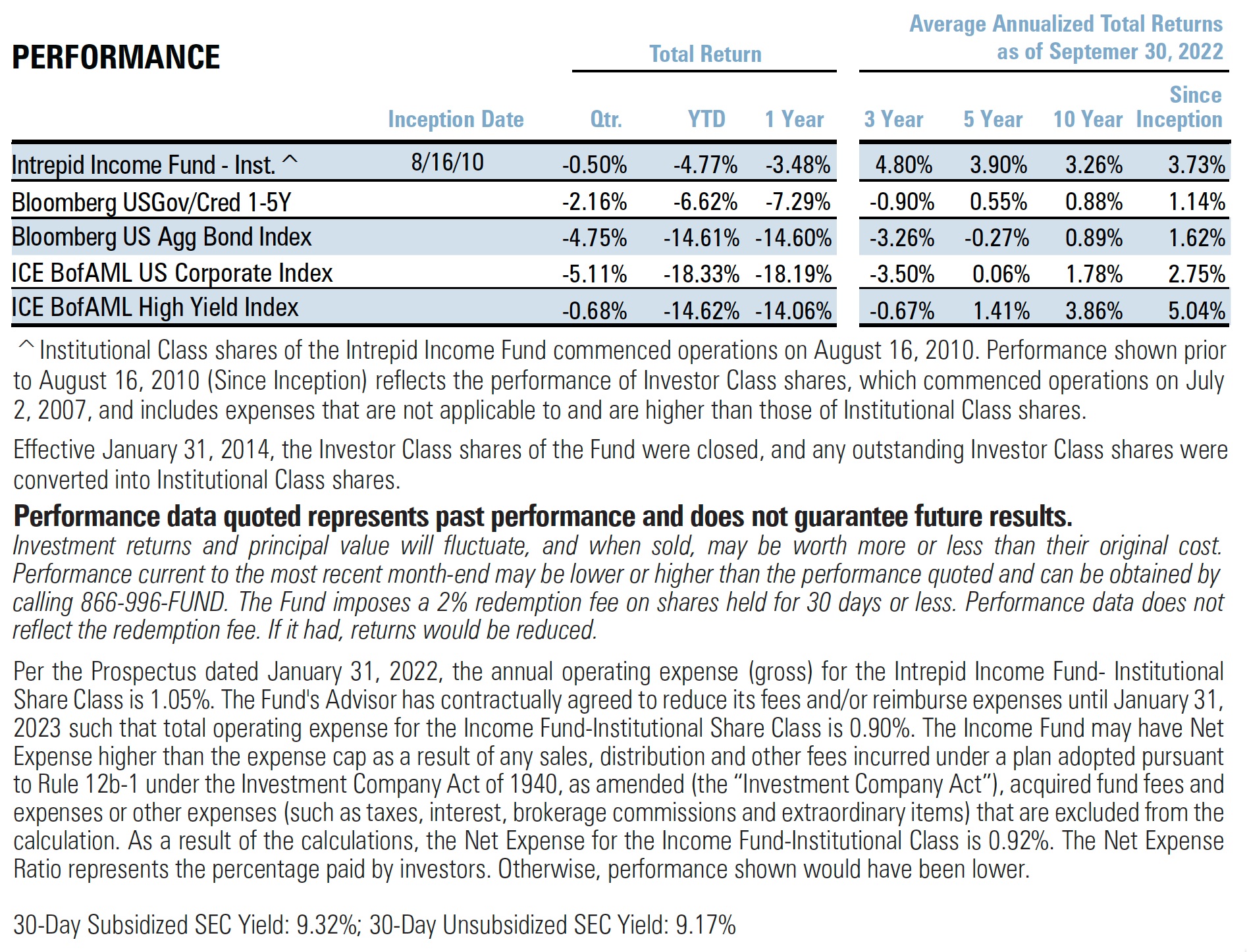 “The intrinsic value of an asset is determined by the cash flows you expect that asset to generate over its life and how uncertain you feel about these cash flows.”

The Intrepid Income Fund (the “Fund”) returned -0.50% for the quarter ended September 30, 2022. Our primary focus remains on deploying capital in a disciplined way during these perilous times in the capital markets.

Fixed income indices continued to suffer. The duration-heavy Bloomberg Barclays US Aggregate Index (the “Barclays Aggregate Index”) took its lumps, returning -4.75% for the quarter ended September 30, 2021 on the back of higher interest rates. Similarly, the ICE BofAML US Corporate Index (the “Corporate Index”) returned -5.11% over the same period. Riskier debt attempted to rally during the quarter, but the ICE BofAML High Yield Index (the “HY Index”) could not quite gather enough steam, returning -0.68% during the period. Not even the shorter-duration Bloomberg Barclays US Govt/Credit 1-5 Year Total Return USD Index (the “1-5 Year TR Index”) was insulated from more pain, returning -2.16% during the quarter.

The Fund’s relative success during the third calendar quarter was attributable to idiosyncratic security performance and our short duration focus. Our top contributors for the three months ended 9/30/2022 included:

Our top detractors for the three-month period ended 9/30/2022 were:

The proceeds from the bonds that were called, sold, or matured were redeployed into a mixture of existing positions and new positions, including:

Despite the tough conditions in the market, we remain excited about the abundant opportunities we see across the fixed income landscape today. We have no idea where the bottom may lie for risk assets, but we continue to evaluate capital deployment opportunities as objectively as we can, with a focus on ensuring we can remain nimble. Given our short duration profile, we will continue to recycle the proceeds from maturing and/or called bonds into what we view as increasingly attractive opportunities.

At the end of the third quarter, the portfolio had a yield-to-worst of 11.37% and an effective duration of 2.0 years.